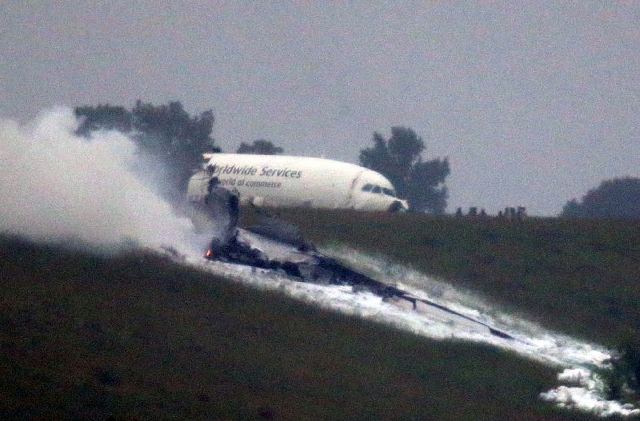 A UPS cargo plane lies on a hill near Birmingham-Shuttlesworth International Airport in Birmingham, Ala., after crashing on approach early Wednesday morning. The pilot and co-pilot died in the crash. 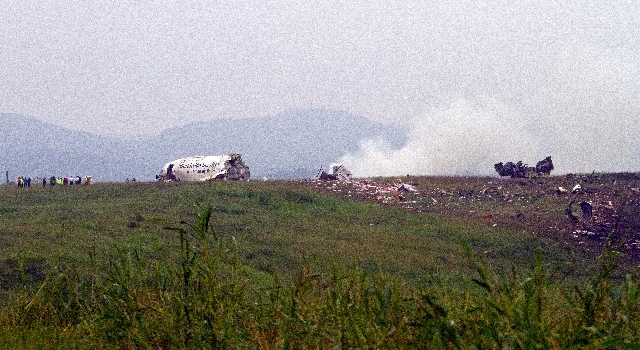 Debris burns as a UPS cargo plane lies on a hill near Birmingham-Shuttlesworth International Airport in Birmingham, Ala., after crashing early Wednesday morning. 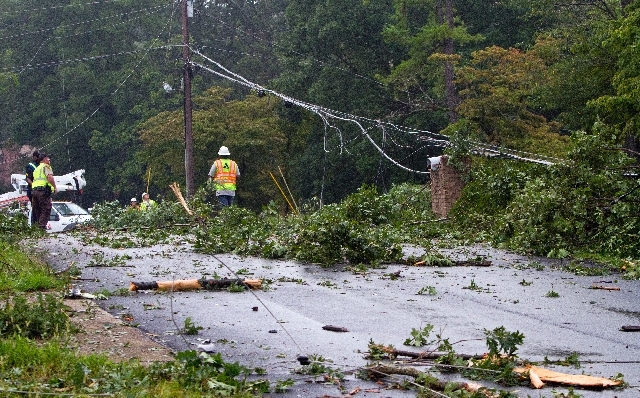 Fire crews assess damage on a street where a UPS cargo plane knocked down trees and power lines as it crashed early Wednsday morning near Birmingham-Shuttlesworth International Airport in Birmingham, Ala.

BIRMINGHAM, Ala. — A UPS cargo plane crashed and burned Wednesday morning on the outskirts of an Alabama airport, killing two crew members and scattering boxes and charred debris across a grassy field, officials said.

The pilot and co-pilot, the only people on board the jet, were killed, said Birmingham Fire Chief Ivor Brooks. The crash site had been burning, but the blaze was extinguished by late morning, Brooks said.

The plane crashed in an open field on the outskirts of Birmingham-Shuttlesworth International Airport, said Toni Herrera-Bast, a spokeswoman for the city’s airport authority. The crash had not affected airport operations, though it did appear to topple a tree and a utility pole.

The top was broken out of the tree and there were pieces of a utility pole and limbs in the road. Nearby, grass was blackened near the bottom of a hill, a piece of the fuselage and an engine were visible on the hill’s crest and smoke could be seen rising from the other side.

The plane was carrying a variety of cargo, according to UPS spokesman Jeff Wafford. He did not elaborate. The names and hometowns of the crewmembers have not been released.

Sharon Wilson, who lives near the airport, said she was in bed before dawn when she heard what sounded like engines sputtering as the plane went over her house.

“It sounded like an airplane had given out of fuel. We thought it was trying to make it to the airport. But a few minutes later we heard a loud ‘boom,’” she said.

Another resident, Jerome Sanders, lives directly across from the runway. He said he heard a plane just before dawn and could see flames seconds before it crashed.

“It was on fire before it hit,” Sanders said.

At 7 a.m. Wednesday, conditions in the area were rainy with low clouds.

“The plane is in several sections,” said Birmingham Mayor William Bell, who was briefed on the situation by the city’s fire chief. “There were two to three small explosions, but we think that was related to the aviation fuel.”

A resident in a home “probably at least a half-mile away from the actual crash site” called police to report that a piece of the plane had fallen on their rooftop, Birmingham Fire Battalion Chief C.W. Mardis said. Police were dispatched to investigate that report, one of two in a neighborhood known as Airport Hills, he said.

James Giles, who lives just off the airport’s property, said the plane missed his home by a couple hundred yards, judging from the tree damage and debris. He was away at work at the time, but said it was clear from the scene that the plane was attempting to land on a runway that’s typically used by much smaller aircraft. Large planes such as the A300 typically use another runway to land in Birmingham, he said.

“They were just trying to get to a landing spot, anywhere,” he said.

National Transportation Safety Board officials said an investigative team was on its way to the scene.

Atlanta-based UPS said in a statement that “as we work through this difficult situation, we ask for your patience, and that you keep those involved in your thoughts and prayers.”

Previously, a UPS cargo plane crashed on Sept. 3, 2010, in the United Arab Emirates, just outside Dubai. Both pilots were killed. Authorities there blamed the crash on its load of between 80,000 to 90,000 lithium batteries, which are sensitive to temperature. Investigators found that a fire on board likely began in the cargo containing the batteries.

The Airbus A300 that had taken off from Louisville, Ky., crashed around 5 a.m. CDT about a half-mile from the runway, said Federal Aviation Administration spokeswoman Kathleen Bergen said.

THE ASSOCIATED PRESSs Becky Yonker and Bruce Schreiner in Louisville, Ky., Jeff Martin in Atlanta and Josh Freed in Minneapolis contributed to this report.