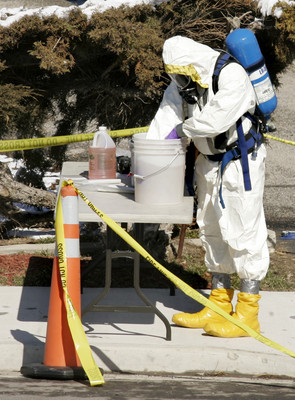 RIVERTON, Utah — FBI agents wearing protective suits searched Sunday for the deadly poison ricin at a suburban home where a man possibly sickened by the substance had once lived.

Authorities believe they had found all of the ricin in several vials recovered Thursday from a Las Vegas motel where Roger Von Bergendorff had been staying, but they also wanted to check the home in Riverton, outside Salt Lake City.

“We are taking all the precautions necessary to ensure public safety,” FBI agent Timothy Fuhrman said at a news conference Sunday.

Von Bergendorff had been staying at the Extended Stay America on Valley View Boulevard near Flamingo Road where the ricin was found and has been hospitalized since Feb. 14. He has been unconscious, so police and the FBI have not been able to question him about the ricin.

The FBI got a search warrant for Tholen’s home, where Von Bergendorff once lived.

Fuhrman would not say whether the FBI suspected that Von Bergendorff had manufactured or stored ricin in the home or the rented storage units.

Residents from three surrounding homes were allowed to return by Sunday afternoon, but the Tholen house was still closed off late in the day.

Las Vegas police said that firearms, an “anarchist-type textbook” and castor beans, from which ricin is made, were found in the hotel room where the poison was found.

Fuhrman said investigators still were trying to figure out why Von Bergendorff would have ricin but said there were no signs of terrorist activity.

Neighbors say Von Bergendorff lived in the Tholen home for about a year before moving to Las Vegas about a year ago.

As little as 500 micrograms of ricin, about the size of the head of a pin, can kill a human, according to the Centers for Disease Control and Prevention.