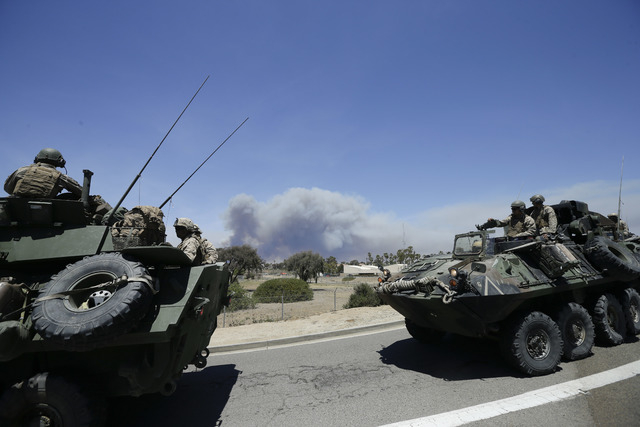 Marines move military vehicles near the entrance to Marine Corps Camp Pendleton in front of smoke plumes from the Las Pulgas wildfire burning on base Friday, May 16, 2014, in Oceanside, Calif. San Diego County officials said Friday five wildfires have been 100 percent contained. Still, crews were focusing efforts on two large fires one in the city of San Marcos and two blazes at the Marine Corps' Camp Pendleton. (AP Photo/Gregory Bull) 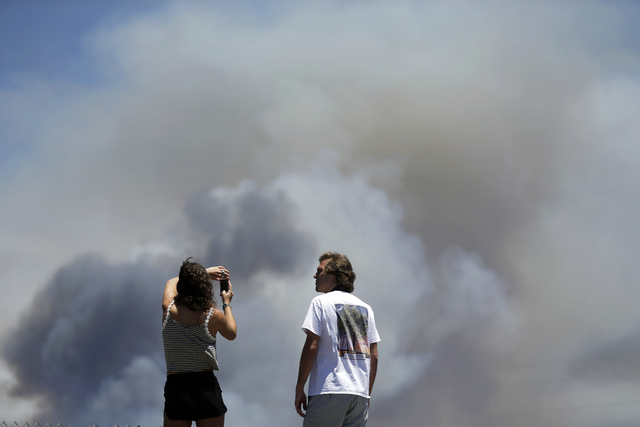 Chase and Brittany Boslet take pictures of smoke from the Las Pulgas fire burning on the Marine Corps Camp Pendleton base Friday, May 16, 2014, from a highway rest area near Oceanside, Calif. San Diego County officials said Friday five wildfires have been 100 percent contained. Still, crews were focusing efforts on two large fires one in the city of San Marcos and two blazes at the Marine Corps' Camp Pendleton. (AP Photo/Gregory Bull) 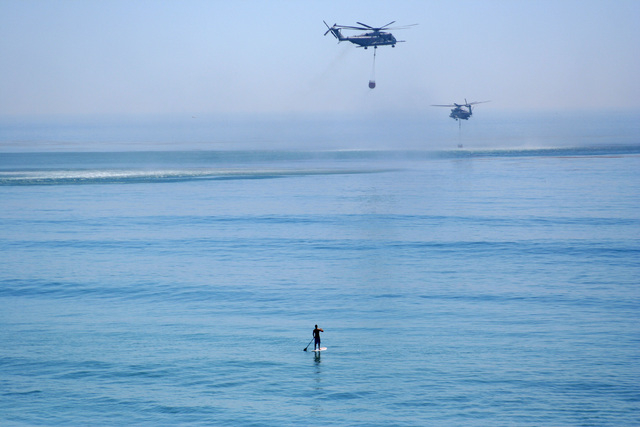 In this May 16, 2014 photo, a paddle boarder watches as two firefighting helicopters take on water from the Pacific Ocean off of San Clemente, Calif. The water-dropping helicopters were part of a larger effort combating three wildfires at the nearby Camp Pendleton Marine base. The fires prompted about 8,400 military personnel and their families to be sent home from various parts of the sprawling coastal base between Los Angeles and San Diego. (AP Photo/Bailey Bianco) 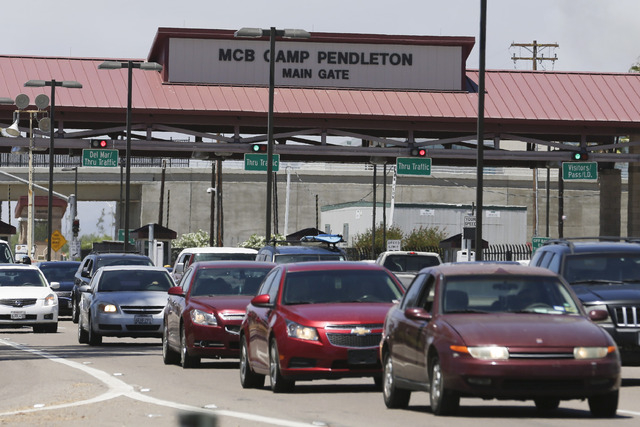 Cars leave the Marine Corps Camp Pendleton base during a partial evacuation due to wildfires Friday, May 16, 2014, in Oceanside, Calif. San Diego County officials said Friday five wildfires have been 100 percent contained. Still, crews were focusing efforts on two large fires one in the city of San Marcos and two blazes at the Marine Corps' Camp Pendleton. (AP Photo/Gregory Bull) 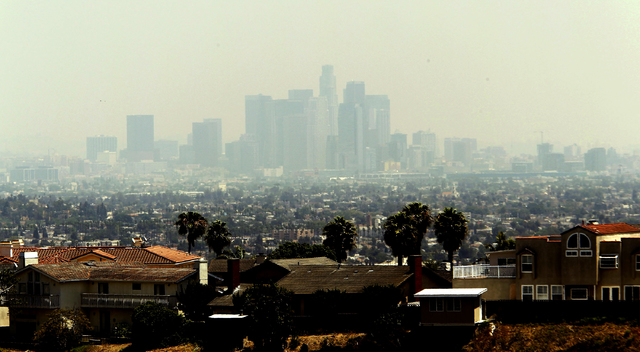 A smoky haze obscures the Los Angeles skyline Friday May 16, 2014. Smoke from several wildfires that have burned more than 1, 500 acres in Southern California have drifted north into the city.(AP Photo/Nick Ut)

ESCONDIDO, Calif. — The last of tens of thousands of evacuees returned home Saturday after firefighters scoured charred hillsides north of San Diego to guard against a resurgence of flames that ripped through the region this week.

For those battling a series of blazes for days, the relief was mixed with a sense of dread that drought-sapped vegetation, high temperatures and low humidity portend a long fire season ahead.

The California Department of Forestry and Fire Protection has responded to more than 1,500 fires this year, compared with about 800 during an average year.

“Normally, I don’t even put wildfire gear in my vehicle until the end of April. This year I never took it out,” Kirk Kushen, battalion chief of the Kern County Fire Department, said at a base camp in Escondido. “We never really completed the 2013 fire season. It’s been a continuation.”

At least 10 fires spanning 39 square miles have chewed a destructive path through San Diego County since Tuesday, destroying 11 houses, an 18-unit apartment complex and two businesses. A badly burned body was found in a transient camp, and one firefighter suffered heat exhaustion.

The first blaze was caused by a spark from construction equipment, according to state officials, but it could take months to get to the bottom of the most damaging fires. Alberto Serrato, 57, pleaded not guilty Friday to an arson charge in connection with one of the smaller fires, but authorities say they don’t believe he started it, just added brush to it.

Ocean breezes and lower temperatures Saturday aided firefighters, who focused on a 1,000-acre blaze on the Camp Pendleton Marine base and a 4-square-mile blaze that started in the suburb of San Marcos.

Firefighters doused remaining hotspots with hoses and water-filled backpacks, sawed large logs and raked soil with shovels and other hand tools to ensure the ground was moist enough to prevent fires from returning.

Kushen, who was working his 10th straight day and was nearly 27 hours into his shift as his team prepared to go rest at a hotel, saw between 15 and 20 destroyed houses or other structures while combing the hills in and around San Marcos for smoke and smoldering brush.

San Marcos, a suburb of 85,000 people where strip malls and new housing tracts mix with older homes, slowly returned to normal as more roadblocks were removed.

“It’s such a wonderful blessing to be back,” Jamie Williams said as he unloaded three bags of clothing from his car that he took when ordered to evacuate Wednesday night. “It was almost a teary-eyed kind of thing.”

Most evacuations were lifted, except for one neighborhood in San Marcos.

The tinder-box conditions have put firefighters on alert throughout California. The state firefighting agency went to peak staffing in the first week of April, instead of its usual start in mid-May.

Battalion Chief Kevin Taylor of the Paso Robles Fire Department in central California usually doesn’t leave home until late July to assist other agencies during the fire season. He was dispatched to the Los Angeles area in January and led a crew that began work near San Diego on Thursday.

“There hasn’t been a break,” said Taylor, as he ate lunch under a shaded tree amid orders to be ready to move on three minutes’ notice. “It’s almost a 12-month fire season.”