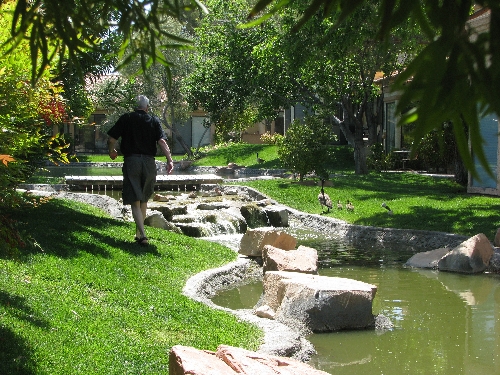 The little gated community of Brookline Springs near Pecos Road and Russell Road holds around 75 homes clustered around a central network of ponds, streams and waterfalls. Everyone’s backyard opens to what is essentially a communal backyard park.

The water features are a rarity in the desert, and although they were original built as an amenity for the people living there, they now officially belong to the waterfowl. Thanks to Brookline Springs resident Rick Mills, the neighborhood’s common area has been officially named by the National Wildlife Federation as a certified backyard habitat.

To say that Mills is an animal lover is an understatement. He hosts an annual birthday party with a dozen or so guests for Kia, his beloved 23-year-old cat. When he realized she was having trouble jumping to her favorite napping spot, Mills built a bridge across the cabinets in the kitchen.

When he heard a story on TV about a cat that had been shot in the mouth with a pellet gun, he rushed to see to the vet who was caring for it.

“Some jerk shot a piece of its tongue out,” Mills said. “The owner was a single mom with two kids and no money. I just left my credit card there and said do what you need to. That cat was supposed to be on a feeding tube the rest of its life, but it got so well that it was eating on its own. That was worth every penny spent.”

Mills moved into his Brookline Springs home 18 years ago, when it was only three years old. The ducks were already well established in the ponds and streams. That was part of what drew him to the place. He used to buy 50-pound bags of chicken feed for them, but he had to stop.

“There were times when there were 200 ducks out there,” Mills said. “I don’t feed everybody now, I just take care of the guys that need taking care of.”

The “guys that need taking care of” vary from month to month. Mills is a regular visitor to Animal Kingdom Veterinary Hospital at 1325 Vegas Valley Drive, where he helps out rehabbing injured wildlife by bringing a select few to his backyard to recuperate before they spread their wings and fly away.

It was only a few years ago that the tranquil flow of water in Mills’ neighborhood was nearly stopped.

“A few years ago they started shutting down the water features around town,” Mills said. “I thought if they shut down this place it would all go to hell and the ducks would be out of luck.”

Until that point, his habit of treating the backyard as his own personal wildlife sanctuary had been looked down on by some of his neighbors, but Mills had had some dealings with the U.S. Fish and Wildlife Department and he had a plan that he took to his home owners association.

“I told them that someone from the board had to apply to have this certified as a registered backyard wildlife habitat,” Mills said “That way the water couldn’t be shut off. They didn’t think it would work, but they tried, and it did.”

Margie Klein, an independent environmental educator, teaches a class in the spring and fall at the University of Nevada, Las Vegas, which instructs people on how to do just that. The course, which Klein teaches with Paula Garrett, a research scientist with the UNLV arboretum, is called “Creating Your Own Backyard Wildlife Habitat.” The most recent session was May 14. Course dates for the fall session have not been set yet.

“We teach people to choose the right plants and provide a habitat that will attract birds, lizards and beneficial insects,” Klein said. “We try not to encourage rodents because they attract predators like coyotes and bobcats, and we don’t want to encourage them further into the valley.”

Klein added that May is Backyard Wildlife Habitat Month, making it the perfect time for people to make a difference in their own backyard.

“You pay $20 to certify your backyard,” Klein said. “You get a membership, they’ll plant native trees for you and you get a sign for your yard.”

Mills and his wife, Bonnie, have dual U.S. and Canadian citizenship, so they were particularly excited in the fall of 2007 to wake up one morning and find a pair of Canada geese in their backyard.

“I went out and fed them some bread, and they’ve come back every year,” Mills said. “They have nests here and raise their babies here. They aren’t afraid of me. They’ll walk right into the house like they own it.”

Mills said the geese have been so accustomed to his home that they will often tap on his sliding glass door demanding food. They aren’t the only animals that demand his attention.

“One day, I was out there feeding the ducks, and I felt something scratching on my leg,” Mills said. “It was a turtle looking up and me like he was saying, ‘Feed me, too.’ The animals and I get along famously.”

Bonnie makes sure that Mills doesn’t get too full of himself in his backyard refuge.

“Why’d you kill those bears then?” she asked him playfully.

Mills shook his head with a smile and explained.

“When I was 14 years old I shot two bears up in British Columbia,” Mills said. “I didn’t shoot them for food, I shot them to be a big shot, rotten kid, and to this day I regret it. Every time Bonnie wants to take the wind out of my sails, she brings it up.”

These days, the bears seem far from his mind. Kia dozes happily on a cabinet in the kitchen, and her vet predicts that she’ll easily celebrate her 25th birthday. A pair of rescued Chinese walking ducks are settling in the shrubs behind the bedroom, and baby ducks and geese paddle contentedly in the water.

“We get hundreds of hummingbirds here in the summer,” Mills said. “At night there are four or five families of baby ducks and the geese and their babies and the turtles swimming out there. It’s like you died and went to heaven. I don’t care how bad a mood you come home in, you go sit out there and all is well.”