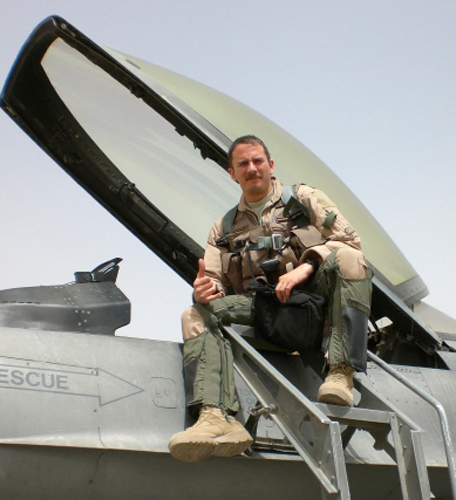 The humble West Fargo native was quick to change the subject when someone would mention his accomplishments, his sister said.

The experienced Air Force instructor pilot liked to plan things out and choose his paths carefully, his dad said.

And the new father possessed a strong yet quiet faith, the kind that has comforted his family since he died on June 28 when his fighter jet crashed during a combat training exercise flown out of Nellis Air Force Base, his widow told The Forum last week in the family’s first extensive public comments about the crash.

Last month, an Air Force investigation concluded Ziegler blacked out because of gravitational forces during a high-speed maneuver.

"I’ve always believed, and still do, that everything happens for a reason and a purpose, and so I didn’t need a source or object to blame or anything like that," she said.

Sitting on the couch at her mother-in-law’s house in West Fargo, surrounded by framed pictures of Eric as their 13-month-old daughter slept in the next room, Sarah didn’t hesitate when asked about that reason.

"I think it’s part of God’s plan for all of our lives," she said. "And it’s I think so others can learn from it, whether it be pilots or just people looking at Eric’s life, and maybe his story can just be an inspiration to a kid in West Fargo who might want to fly airplanes."

Eric’s desire to fly didn’t develop until college. Sports were his first love, said his father, Lynn Ziegler. As a senior at West Fargo High School, Eric helped lead the Packers football team to a state title in 1999. He also played baseball and ran track.

Beyond sports, Eric enjoyed fishing and was active in his church youth group, said his mother, Val Ziegler.

He met Sarah Kotte, a student at Fargo South, in June 1998 when both attended the Summer Scientific Academy at the U.S. Air Force Academy in Colorado Springs, Colo.

Their mothers worked at a hospital together and, playing matchmaker, made sure Eric and Sarah knew each other would be there.

By senior prom, both had been accepted to the Air Force Academy. For one picture, Sarah wore combat boots to complement her prom dress.

During their sophomore year at the academy, Eric took an interest in fighter pilots’ tales of the challenges and camaraderie their careers offered. He gradually decided to pursue flying, while Sarah, whose imperfect eyesight kept her out of the cockpit, became an aircraft maintenance officer.

After graduating from the academy in 2003, they bounced around several bases as Eric continued his pilot’s training. The couple tied the knot in 2004.

With his training completed, Eric spent about 14 months with a combat squadron in South Korea before he and Sarah were stationed in September 2007 at Spangdahlem Air Base in Germany.

Eric twice deployed to Iraq, first from January to June 2008 and then with Sarah from May to September 2009. They celebrated their fifth wedding anniversary with dinner in the chow hall at Joint Base Balad on a 110-degree day.

In September 2010, Eric joined the 442nd Test and Evaluation Squadron at Nellis. Sarah decided to leave the Air Force for a new career path: mother.

June 28 started out as a normal day, Sarah said. Sarah said she and Eric spoke only briefly about that afternoon’s mission: a proficiency training exercise, his last before heading off to the selective U.S. Air Force Weapons School, to which he’d already been accepted.

Twenty-six minutes into the flight, Eric was attempting a high-speed turn that likely involved 8 Gs or more when the jet stopped maneuvering and nose-dived, according to the crash report summary. There was no evidence that he tried to eject or maneuver the jet before it crashed in a remote area of Lincoln County about 20 miles west of Caliente and about 150 north of Las Vegas.