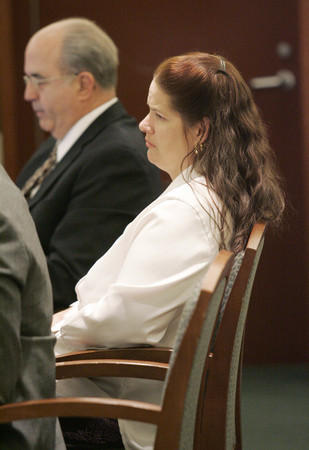 Ochs told 911 operators, paramedics, medical staff, police and Child Protective Services investigators that the boy, known as Baby Boy Charles, was injured when he was pushed over by her two children, then ages 2 and 3.

She also told authorities that Baby Boy Charles had slipped and banged his head in the bathtub two days before his injuries were reported on Aug. 2, 2006.

On Tuesday, while testifying in her own defense, Ochs told a District Court jury that neither account was true. She is charged with first-degree murder by child abuse.

Ochs now says Baby Boy Charles fell from the top of the washing machine to the floor of her home, near Sahara Avenue and Fort Apache Road.

He suffered a skull fracture and swelling of the brain. Doctors who treated him found a high likelihood of nonaccidental trauma to be the cause of the injuries.

Ochs said the injuries to her foster son were an accident, which happened after she left him alone.

She said she had gone into a nearby bathroom to check on the two older children, who were fighting over the toilet.

Ochs left Baby Boy Charles on top of the washing machine, where she was preparing to change his diaper.

Ochs said she was gone for about 30 seconds. She heard a thud and came back to find the baby on the floor.

"It was a stupid thing. I knew better. I didn’t do it maliciously," she said during four hours of testimony.

She said the boy was OK when she picked him up. She later checked on him in his crib.

When she found he wasn’t breathing, she said, she tried to resuscitate him.

The baby vomited in her mouth and began to breathe. Ochs then called 911.

She told the operator that the back of the baby’s skull felt mushy and that he had a large lump on his head.

Ochs said she had lied about how the baby was injured because she feared what would happen if authorities learned the truth. "I was terrified they would take him away."

She added that she thought telling the truth would not have changed anything once he was in the hands of medical professionals.

Prosecutors have maintained that a fall such as the one Ochs described would not have killed the infant. Authorities think some type of abuse was involved.

In one of the more dramatic moments during Ochs’ cross-examination, prosecutor Vicki Monroe asked, "What caused you to snap that day?" The implication was that Ochs had done something to cause the baby’s injuries.

Ochs, who appeared angered by the question, did not have to respond because her attorney, Robert Langford, quickly objected to the question. Judge Michael Villani sustained the objection.

Earlier in the trial, prosecutors called three physicians who testified that Baby Boy Charles had suffered two separate traumatic injuries to his head. They each agreed that a single fall might explain one of the injuries but not the other.

Clark County deputy medical examiner Gary Telgenhoff said that while a fall from a washing machine might cause a fracture, it was unlikely to cause as severe a fracture as the one suffered by Baby Boy Charles.

Dr. Meena Vohra, a pediatric critical care physician who treated the baby at Summerlin Hospital Medical Center, also testified. She said that when the baby was brought in by paramedics, his injuries were so severe it was clear he would not survive.

"The history that was given at the time as to how these injuries occurred was not consistent with the way the child was presented," she said.

The defense is expected to continue presenting their case today. Prosecutors then will call rebuttal witnesses.

The trial, which began last week, could continue into next week.