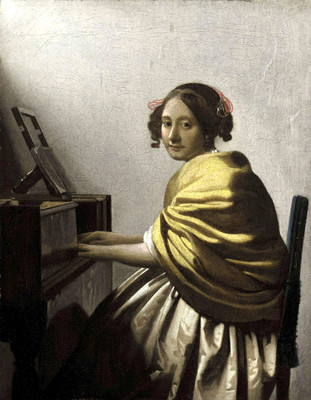 Resort developer Steve Wynn has sold the Johannes Vermeer painting he purchased four years ago for $30 million, sources have confirmed.

The identity of the buyer is not known.

Wynn’s acquisition of “Young Woman Seated at the Virginals,” the first Vermeer to appear at an auction since 1921, had the art world abuzz because Sotheby’s in London would not identify the buyer, who paid more than five times its pre-sale estimate.

The painting, barely the size of a book at 9 7/8 inches by 7 7/8 inches, was on display in the since-closed Wynn Las Vegas gallery before Wynn had it moved to his office.

Vermeer, considered one of the great Dutch masters and foremost colorists, painted the scene in 1670, five years before his death at age 43.

Only 35 of his paintings have survived.

Gay rights groups are asking Jerry Lewis to apologize for the second time in a year for an anti-gay slur. Asked for his opinion last week on the sport of cricket, Lewis told an Australian television station it was “a fag game.” He added a visual: he pretended that he was holding an imaginary bat and made an effeminate gesture, according to The Associated Press. Lewis, 82, apologized for using the same word during his annual telethon a year ago. … Cirque du Soleil spokeswoman Anita Nelving has confirmed Criss Angel‘s claim here last week that the Luxor’s new show, “Believe,” is the No. 1 best-selling Cirque show. Angel’s comment caused an uproar among doubters after a storm of negative reports and responses. Nelving told me Saturday that the four weeks of previews were sold out and grossed $5 million. She told local freelance writer and podcaster Steve Friess of VegasHappensHere.com that “In terms of daily sales, currently ‘Believe’ is averaging higher or equal to our other top-selling productions in Las Vegas.” The magic production launches Friday. … Caesars Palace headliner Cher is a guest on the “Ellen DeGeneres Show” on Nov. 3 (3 p.m., Channel 8, KLAS-TV). Maybe Ellen can squeeze more information out of Cher on her health issues that caused her to cancel six shows this fall and another four earlier this year. … What happened to Paul Rodriguez? He was to host “The Real Deal!,” the new poker-themed stage show at The Venetian. Vinnie Favorito has the role.