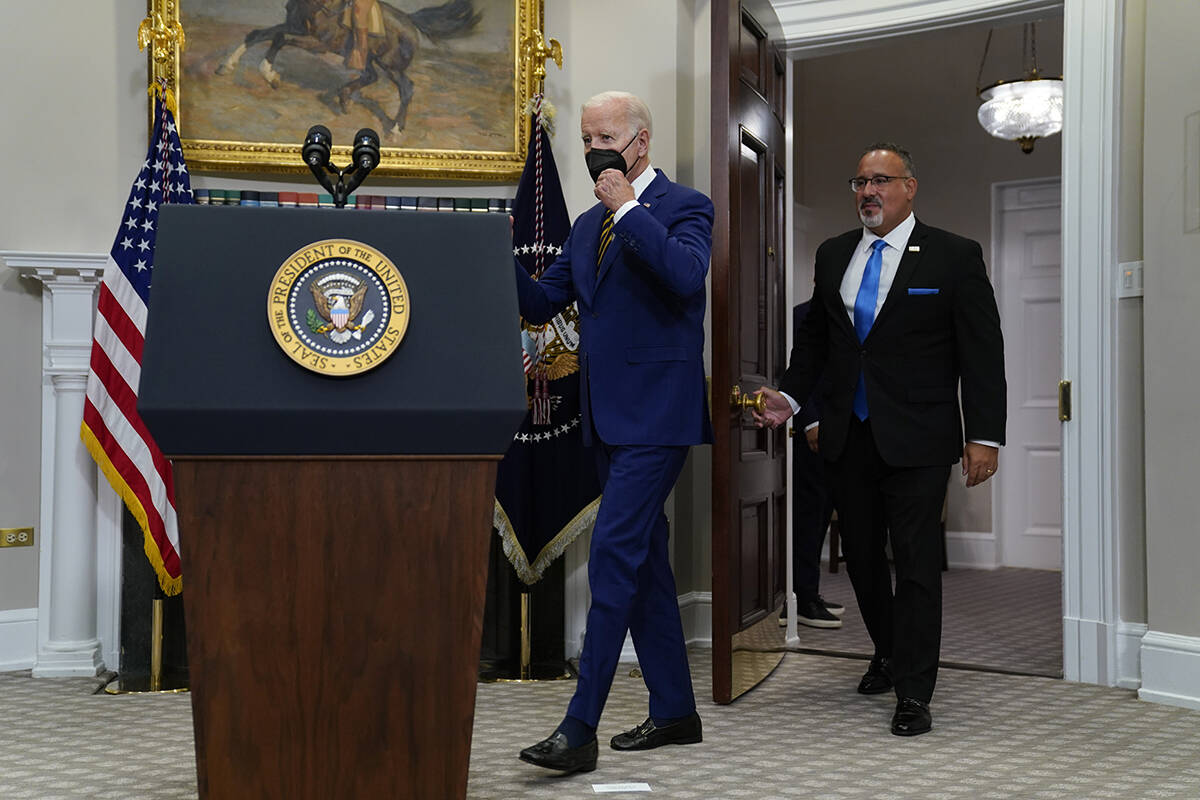 Biden knew he was taking a big political gamble, but he wanted to make good on a campaign promise to wipe out significant amounts of student loan debt for more than 40 million Americans. His plan calls for canceling $10,000 in debt for those earning less than $125,000 per year and $20,000 for those who had received Pell grants for low-income families.

The political gamble is his apparent hope that voters who favor loan forgiveness, a strong faction in his party, outnumber those who see forgiveness as a slap against those who dutifully paid back their loans without getting a break or worked to avoid taking them out in the first place.

That’s the message from Georgia Republican Rep. Marjorie Taylor Greene, who lashed Biden’s move in a Newsmax appearance as “completely unfair” to “taxpayers that never took out a student loan, taxpayers that pay their bills and maybe even never went to college and are just hardworking people.”

That was a typical and predictable reaction from the right. But I wasn’t expecting to see her soundbite retweeted by the White House with the added caption, “Congresswoman Marjorie Taylor Greene had $183,504 in PPP loans forgiven.”

Other GOP congressmen were similarly zinged by the White House, including Florida’s Matt Gaetz, Pennsylvania’s Mike Kelly, Florida’s Vern Buchanan and Markwayne Mullin and Kevin Hern, both from Oklahoma.

The student loan debate continues, along with the meme warfare. Whichever side you take, I think it’s healthy for “Dark MAGA,” as Biden now calls Donald Trump’s domination of the Grand Old Party, to think twice before singling out loans to struggling families and individuals as a “moral hazard” while offering the same sort of help to employers.

Yet the apologists are not all wrong to say the Paycheck Protection Program loans aren’t exactly the same as student loans. The PPP is a central part of the Coronavirus Aid, Relief and Economic Security Act, or CARES Act, which was created to help small businesses to retain their employees during the pandemic.

Federal student loans have a longer and more complicated history since the Cold War years and President Lyndon Johnson’s Higher Education Act of 1965 in a new push to expand college and technical education opportunities to working class baby boomers like me.

Since then, tuition at good state universities such as mine have grown from a few hundred dollars a semester to thousands of dollars, especially after state governments in President Ronald Reagan’s era put new limits on how much they could tax or spend to subsidize higher education. Increasingly, students and their families have been left holding the bag on college costs that don’t go anywhere but up.

What to do about it?

Here is where I turned from Twitter to call Richard Vedder, economics professor emeritus at Ohio University, where I was one of his students. He since has gained fame and, in some academic circles, infamy as an author-crusader against rising college costs and a senior fellow at Oakland’s libertarian Independent Institute.

As I expected, Vedder roundly criticized Biden’s loan forgiveness as adding to the larger long-range problem of soaring college costs more than solving it. “Universities have become wards of the state and reliable and dependable political allies of big government,” he said. Loan forgiveness, in Vedder’s view, “will enable schools to raise fees even more and solidify the administration’s relationship with an important ally.”

That won’t do much, he noted, to counter the troubled outlook of higher education. In the 1960s, when I was a student, the proportion of Americans in college doubled, he noted. In the past decade, it declined.

That’s not healthy for our nation’s future. Unfortunately election years tend to be the worst time to tackle serious challenges. But, somehow we need to do it — with more than memes.