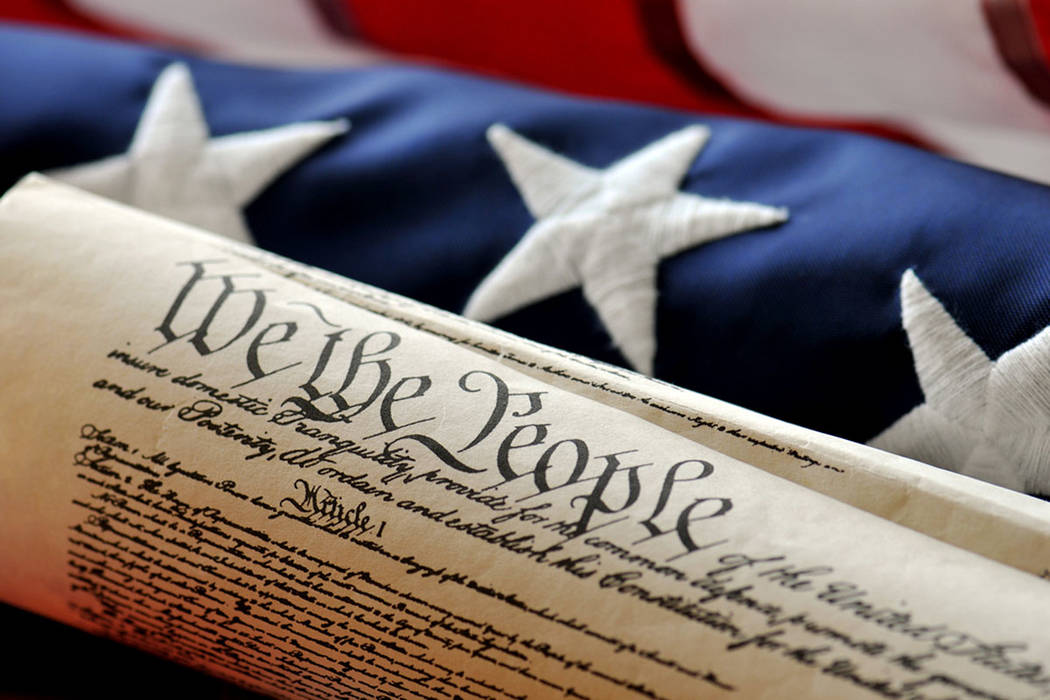 Hard-working people want to be responsible citizens but often don’t know how. What are we to make of the never-ending parade of news, the partisan voices yelling at one another, the seeming impossibility of understanding “the big political picture” without devoting a lifetime of study to it?

I don’t have easy answers, but along comes a special day, created by Congress, that will help us make sense of our world if we put some effort into it: Constitution Day, a national observance of the signing of the U.S. Constitution on Sept. 17, 1787. It may not be a holiday from work, but it is an opportunity to learn about the rights and responsibilities of living in this country.

How should we take advantage of the opportunity? We might find a lecture to attend at a university such as UNLV. But there is no substitute for reading the Constitution for ourselves, with the help of a guide. The Constitution is easy to find in print and online, and one interactive guide is provided by the nonpartisan National Constitution Center (constitutioncenter.org/interactive-constitution). The guide explains the provisions of the Constitution in an easy-to-use format, and offers essays by scholars with different interpretations of those provisions, discussing what they agree and disagree on. If you want to understand, for instance, what the “free exercise” of religion has meant to different people over the centuries, it is an excellent place to look.

The best guide, however, can actually be found in an old book: The Federalist Papers, a collection of 85 newspaper essays written by Alexander Hamilton, James Madison and John Jay to promote ratification of the Constitution. It is certainly not a musical and isn’t the easiest read, as 18th-century writing differs from what one finds in newspapers today. But stick with it, and you will be rewarded with, for example, explanations of how the size of this country helps prevent one faction from tyrannizing over the people as a whole (essay No. 10), and of how the framers of the Constitution used ambition — instead of trying to choke it — to make the wheels of government turn (essay No. 51).

To understand the Constitution, it helps to understand the people who created and ratified it, including the country in which they lived. For that purpose, I urge on you the best book on U.S. politics ever written: Democracy in America by Alexis de Tocqueville (I recommend the translation by Harvey C. Mansfield and Delba Winthrop).

Yes, Tocqueville was a Frenchman, but sometimes it takes a foreigner to recognize who we are. He wrote in the early 1800s, decades after ratification of the Constitution, but his analysis is still relevant today.

Tocqueville understands 21st-century Americans, especially our tendency to withdraw from civic engagement and escape into small circles of family and friends. He has a word for it: individualism. To us, it may be a relief from the stresses of life, but Tocqueville shows that it threatens our democracy. Yet he does not come to scold us, rather to encourage us to make the most of our social and political institutions: civic and political associations, freedoms of religion and press, even juries.

Now, when politics may seem messier and more out of control than ever, we need to learn Tocqueville’s lesson that freedom does not exist in a vacuum. Free people are those who can govern themselves, and uneducated people do not have a hope of governing themselves. Uneducated people depend on the benevolence of their leaders, and benevolence will not always be forthcoming.

It would be naïve for us to tell ourselves that we do not need to study the Constitution, that we can trust in it to last forever. It is a marvelous document. But our future under it will be brighter and longer if we understand and appreciate why it is marvelous.

— David Fott is a political science professor at UNLV.