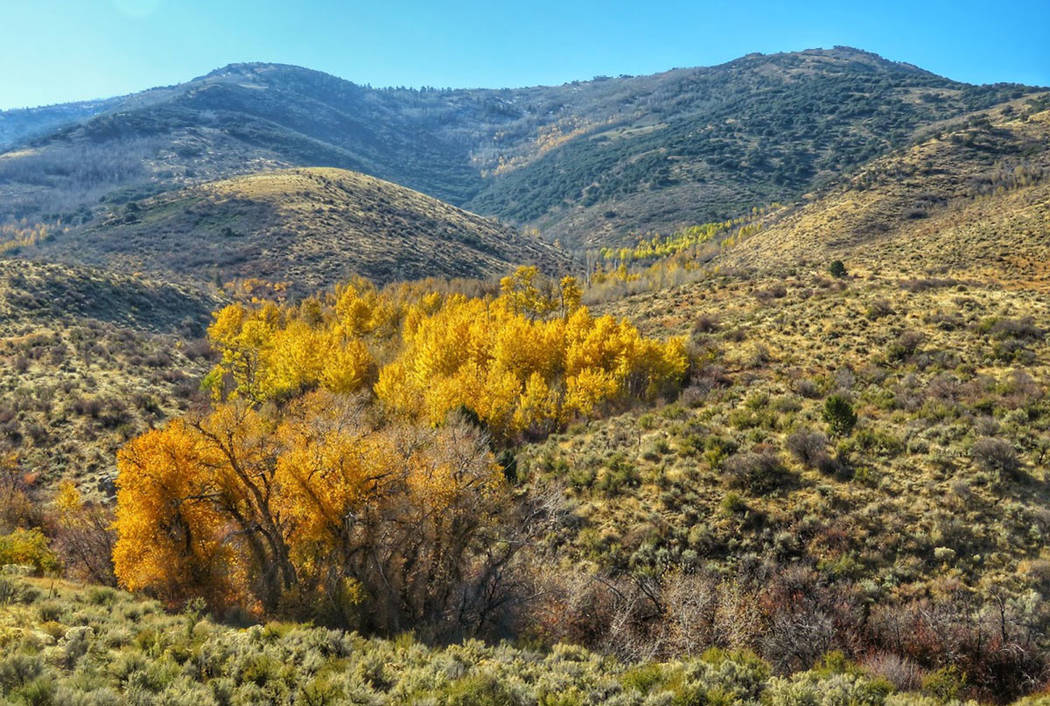 Fall leaves color the Ruby Mountains of Northern Nevada, where the U.S. Forest Service is studying whether 54,000 acres should be opened up for oil and gas exploration. (Patrick Donnelly/Center for Biological Diversity)

The Bureau of Land Management’s most recent Nevada oil and gas lease sale is perhaps the most egregious example yet of the agency auctioning off this state’s land, heritage and life blood to the lowest bidders.

The BLM offered 48 parcels for sale, consisting of 111,420 acres. Much of that land, while largely absent any real oil and gas potential, includes areas critical for fisheries, recreation and wildlife habitat.

Of those parcels, two sold for the minimum bid of $2 per acre. The rest, all 107,446 remaining acres, are now available for noncompetitive leasing at the bargain basement price of $1.50 per acre. Any public land that is leased through this process remains locked up for at least a decade. This follows on the heels of other similar sales that have offered up a stunning 1.9 million acres of Nevada for lease.

There is certainly nothing conservative about this fire sale approach to land management.

This mad rush to lease huge chunks of Nevada to oil and gas prospectors is all the more bizarre given the fact that Nevada’s geology is mostly devoid of oil and gas. Where is the logic in conducting massive lease sales when the prospects for economical amounts of oil and gas are so scant?

This leasing obsession might be somewhat understandable if there were a serious shortage of those resources, but that is not the case. In fact, it is just the opposite; there is a glut of oil and gas on the market.

In light of these realities, the BLM’s Nevada lease sales make zero sense. It is akin to someone frantically breaking up all their furniture to stoke the fireplace in the heat of summer.

Concerned about potential big game, fishery and water supply impacts, Gov. Steve Sisolak, the Nevada Department of Wildlife and local water districts pushed back, earning a temporary reprieve for some parcels slated for the November auction.

Unfortunately, the BLM could offer them up again at any time, and equally important lands are already slated for auction in this month.

Further, the administration’s oil and gas focus is coming at the expense of other economically important industries that depend on public lands. Outdoor recreation for example, which contributes more — $200 billion more — to the national GDP than mining, oil and gas.

Past administrations, including those of conservative leaders such as Theodore Roosevelt and Ronald Reagan, did quite the opposite. They championed the responsible stewardship and multiple use principles that have guided America’s public land management for more than a century.

Moreover, they understood that the true conservative path is a balanced approach, where conserving our fish and wildlife habitat, providing opportunities for outdoor recreation and protecting our drinking water sources are priorities, too.

Today, however, this tried-and-true approach is being turned on its head, threatening public access, resource quality and the diverse revenue streams that Western communities depend on.

More than a century ago, Theodore Roosevelt cautioned about America’s lands and waters being hijacked by special interest profiteering. He warned of “shortsighted men who in their greed and selfishness will, if permitted, rob our country of half its charm,” and “waste the heritage of … unborn generations.”

The selling off of Nevada public land will continue as long as the Trump administration continues to subordinate all other natural resource values — even essential water supplies for Nevada communities — to farfetched oil and gas development prospects.

The people of this state deserve better.

— Dave Jenkins is the president of Conservatives for Responsible Stewardship, a national nonprofit grassroots organization.