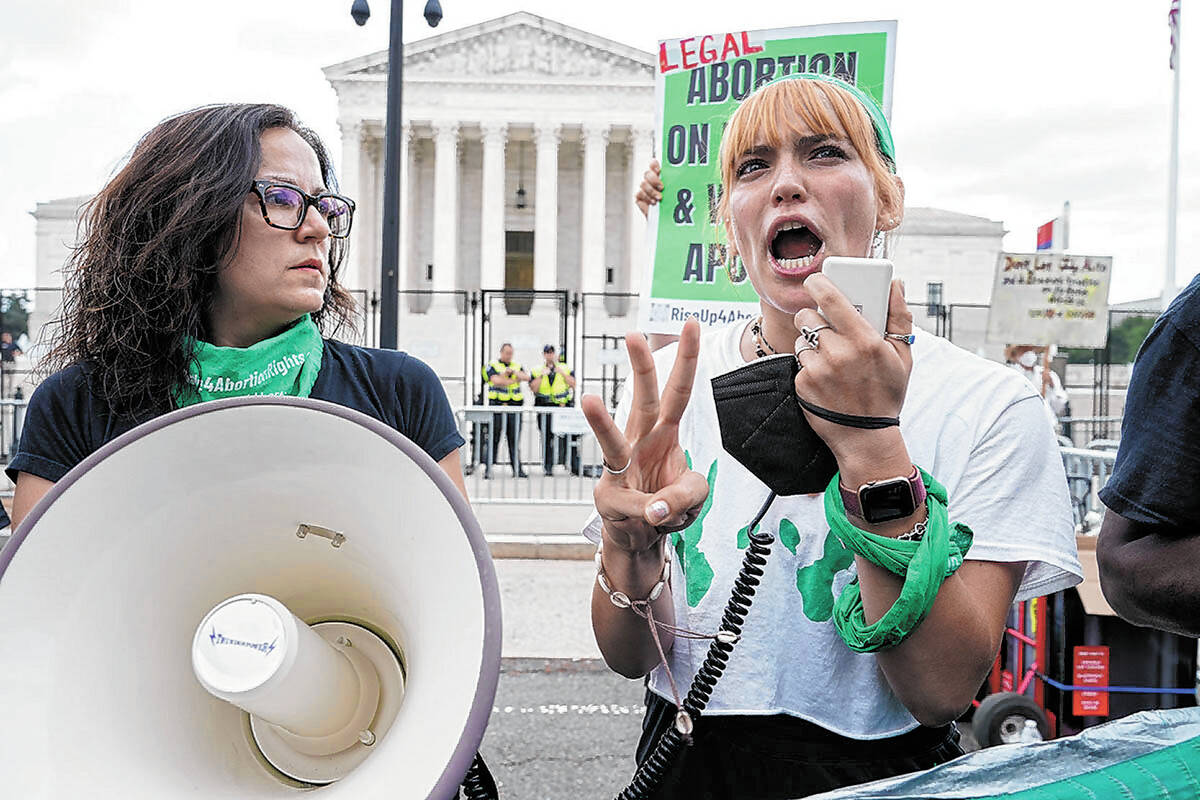 Abortion-rights activists react outside the Supreme Court in Washington, Friday, June 24, 2022. The Supreme Court has ended constitutional protections for abortion that had been in place nearly 50 years in a decision by its conservative majority to overturn Roe v. Wade. (AP Photo/Jacquelyn Martin)

While there is strong disagreement on abortion, there should be agreement on this: Rioting, looting, vandalism and violence are inappropriate responses to the Supreme Court’s decision to overturn Roe v. Wade.

On Friday, the court delivered its much-anticipated ruling in Dobbs v. Jackson Women’s Health. The six Republican-appointed justices upheld a Mississippi law banning abortion after 15 weeks of pregnancy in most circumstances. Five of those justices went further and overturned the abortion precedents in Wade and Planned Parenthood v. Casey.

“Roe was egregiously wrong from the start. Its reasoning was exceptionally weak, and the decision has had damaging consequences. And far from bringing about a national settlement of the abortion issue, Roe and Casey have enflamed debate and deepened division,” Justice Samuel Alito, who penned the majority decision, wrote. “It is time to heed the Constitution and return the issue of abortion to the people’s elected representatives.”

“Whatever the exact scope of the coming laws, one result of today’s decision is certain: the curtailment of women’s rights, and of their status as free and equal citizens,” Justices Stephen Breyer, Sonia Sotomayor and Elena Kagan wrote.

But let’s remember that even the late Justice Ruth Bader Gisburg questioned the legal reasoning behind Roe.

In some states, the ramifications for Friday’s decision were immediate. In more than a dozen states, abortion is now generally outlawed.

In Nevada, however, there will be no changes. Nevada voters approved via referendum the current law, which limits abortion in the third trimester. Any reforms must also be voter approved. Likewise, the availability of abortion will not change in most blue states. This is federalism.

But such nuances are unlikely to calm abortion activists. After the decision was announced, riot police assembled outside the Supreme Court building. Major protests are likely to be ongoing in the coming weeks. Expressing your opinion peacefully is the right of every American. Engaging in violent behavior isn’t.

Those are wise words. Institutions in our democratic republic must not be subjected to violent mobs seeking to force compliance with their agendas. Officials shouldn’t face threats to their physical safety for carrying out their duties. There is no excuse for those who would commit acts of violence in an effort to threaten the very structure of our democracy. That’s the case the Jan. 6 committee has been making — and, often times, effectively so.

The Democratic Party’s commitment to those principles will now be put to the test. In many ways, that test started after a draft of the Dobbs decision leaked. In recent weeks, a man traveled across the country with the intent of assassinating Justice Brett Kavanaugh. Pro-abortion groups have been protesting in front of justices’ homes, in potential violation of federal law. Pro-life groups have been firebombed and vandalized in several states.

So far, the response has been less than vigorous. House Speaker Nancy Pelosi dragged her feet in passing a bill providing extra security for the Supreme Court members and their families. The Justice Department has turned a blind eye to demonstrators at the justices’ private residences.

The rhetoric is getting heated, too. “The hell with the Supreme Court,” Rep. Maxine Waters, D-Texas, said. “We will defy them.” Outside the Supreme Court, Rep. Alexandra Ocasio-Cortez, D-N.Y., joined a crowd in chanting “illegitimate” and “into the streets.”

The country can withstand vigorous debate and heated rhetoric. There is a process in place for abortion activists to make their case before elected representatives in each state. But violence — whether on Jan. 6 or in the wake of a Supreme Court decision — must be condemned and the perpetrators held accountable.