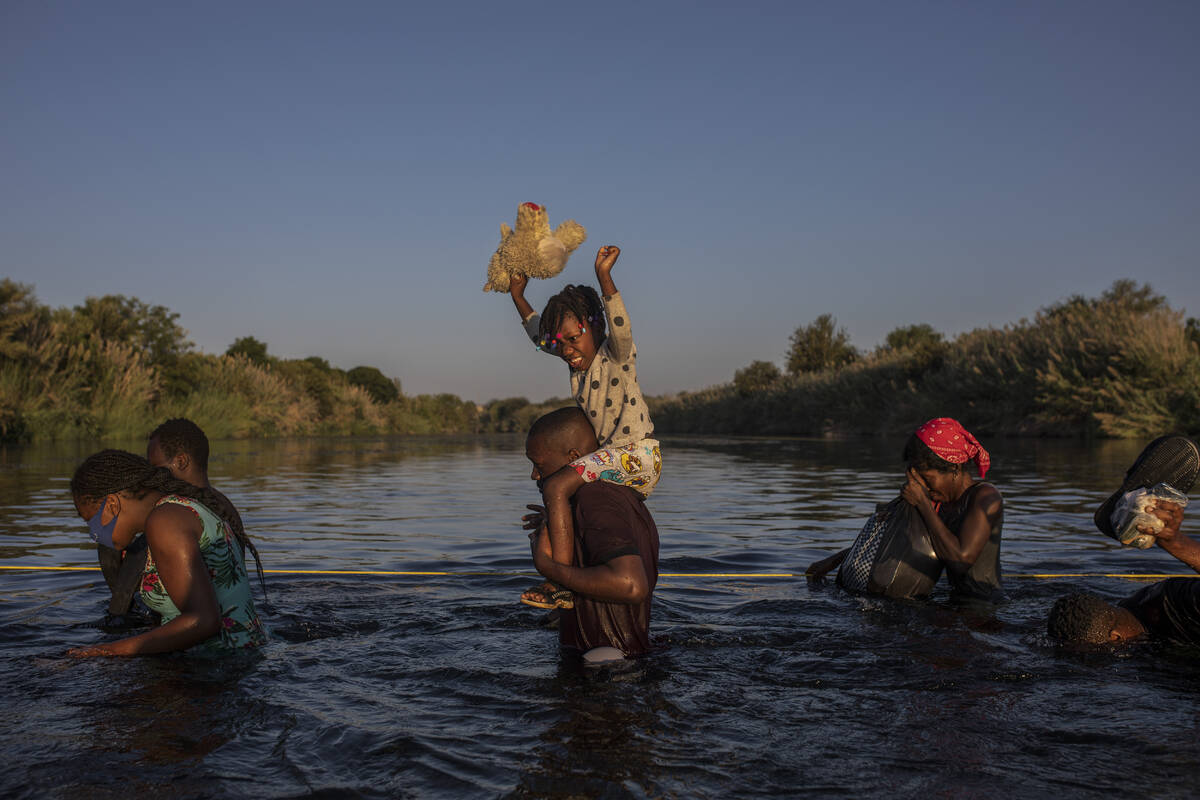 A little girl holds her stuffed animal high above the water as migrants, many from Haiti, wade across the Rio Grande river from Del Rio, Texas, to return to Ciudad Acuña, Mexico, Monday, Sept. 20, 2021, to avoid deportation. (AP Photo/Felix Marquez)

President Joe Biden has spent weeks downplaying the border crisis. The 14,000 people seeking shelter under a bridge along the Texas-Mexico border suggests a different approach is needed.

Last week, thousands of want-to-be immigrants gathered at the town of Del Rio, Texas. The town of 35,000 is around 150 miles west of San Antonio. Many are Haitian migrants who want to claim asylum.

Even in the best of circumstances, processing that many people takes time. The sheer numbers quickly overwhelmed officials.

That meant people had to wait. For thousands, the shelter of choice was the Del Rio International Bridge. It provided some shelter from the heat. Migrants set up tents and used sticks and leaves to create temporary shelters. Many waded back and forth across the Rio Grande to buy food and water in Mexico. On Friday, U.S. Customs and Border Protection temporarily closed the port of entry.

Two problems stand out here. One is the humanitarian crisis. Living under a bridge isn’t a great situation for anyone. The lack of sanitation facilities and necessities is concerning.

Then there is the border itself. One function of the federal government is to control who comes into the country.

There are vast disagreements on things like how many people should be allowed to come here and for what reasons. There should be agreement, however, that the government should determine which noncitizens are allowed to cross the border.

U.S. immigration policy should be built on the following two complementary sentiments.

As a whole, immigrants have and continue to provide substantial benefits to the U.S. And there should be a thorough and orderly vetting process in place to determine if someone is allowed into the country under a framework approved by Congress.

For instance, an Afghan translator who served with the U.S. military should be welcomed into the country along with his family. That’s why Congress created Special Immigrant Visas.

An immigrant who is fleeing political persecution, like the Cuban refugees the Biden administration warned to stay away, has a strong case for asylum.

Unfortunately, Mr. Biden has spent months signaling that the border is wide open to those seeking better economic opportunities. That’s led to high levels of illegal immigration. Holding facilities are overwhelmed, and now migrants are seeking shelter under a bridge. This is a mess of Mr. Biden’s own making. It’s certainly not too late, though, for his administration to get its act together.