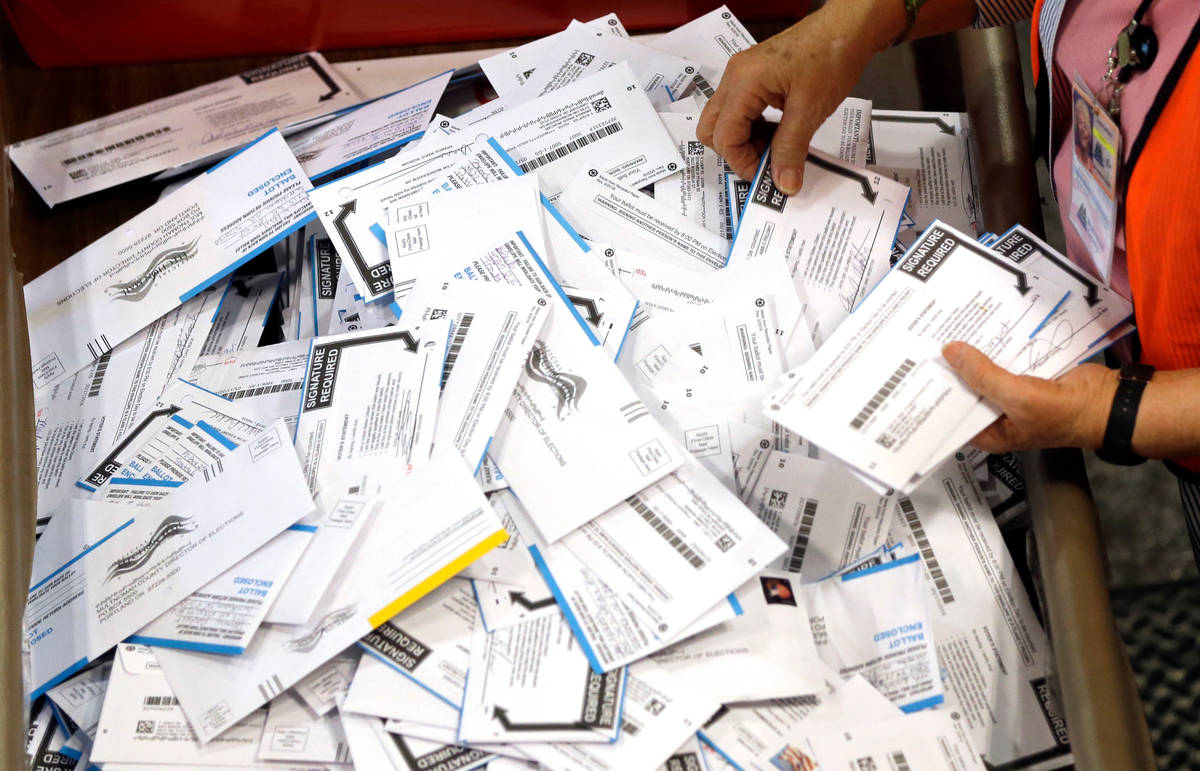 FILE - In this May 17, 2016, file photo, ballots are prepared for counting at Multnomah County election headquarters in Portland, Ore. The coronavirus has knocked presidential primaries back several weeks as officials worry about voters crowding into polling places. If the disease remains a hazard in November, Democrats say there's only one solution to preserve the November election, national voting by mail. (AP Photo/Don Ryan, File)

Making the June primary an all vote-by-mail affair was a prudent response to the coronavirus outbreak. Taking active steps to undermine the integrity of the election isn’t.

Unfortunately, that’s exactly what a host of Democratic groups are doing. After Secretary of State Barbara Cegavske announced that June’s primary would be conducted primarily by mail, Democrats sued. Among other demands, they wanted more than one in-person polling place per county, ballots mailed to inactive voters and the elimination of signature verification.

The Clark County Commission is filled with Democrats, so what happened next isn’t surprising. The county decided to give the litigious groups almost everything they wanted. In response, Democrats dropped their preliminary injunction but not their lawsuit.

Clark County will now have three polling places open on election day instead of just one. Fair enough. But the point of an all-mail election is to prevent people from gathering at polling places. It’s the height of hypocrisy for Democrats, who frequently criticize President Donald Trump’s calls to reopen the economy, to demand more in-person gatherings. At least this move is unlikely to present opportunities to commit fraud. Voters who show up in person won’t be using normal voting machines. They will cast provisional paper ballots.

Mailing ballots to inactive voters is of greater concern. It’s worth noting that “inactive” voters aren’t just those who didn’t vote in the most recent election. At the start of every federal election year, the Election Department mails voters a new registration card to help determine if they may have moved. If a card is returned because it is undeliverable or the recipient no longer resides at that address, the Election Department sends a forwardable postcard asking the voter to provide the new address. The voter is deemed inactive only if he or she doesn’t respond within 30 days.

Inactive voters are inactive because they no longer live where the county has now agreed to send a ballot. “Based on past experience, at least 90 percent of (ballots mailed to inactive voters) will come back undeliverable,” Loreno Portillo, Clark County’s assistant registrar of voters, said in a late April affidavit.

That’s the best-case scenario. There are already pictures and videos of ballots piling up outside of Clark County apartment complexes. The only safeguard against someone successfully and illegally returning those ballots is signature verification. It’s not much of a standard, yet Democrats inexplicably demand that election officials drop signature verification entirely.

Knowingly mailing a ballot to a wrong address is bad enough. Combining that with the elimination of signature verification is an open invitation to shenanigans and makes absolutely no sense. Nevada’s courts and election officials must reject these efforts.