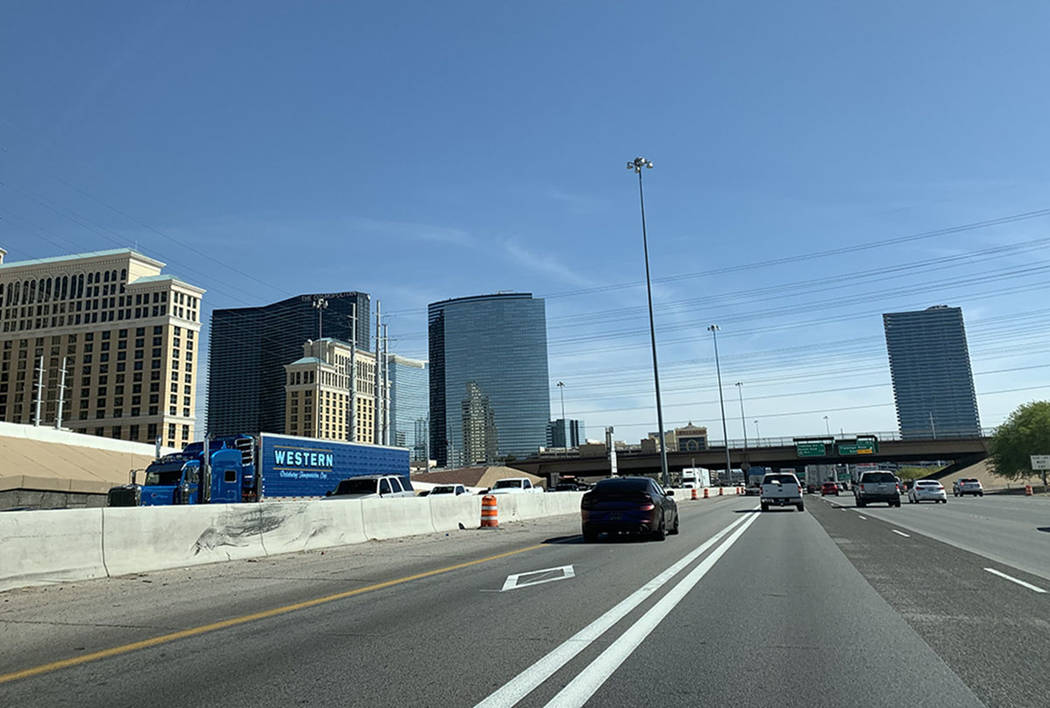 One of the biggest gripes since Project Neon’s completion and the introduction of the 22 miles of HOV lanes—aside from them being in existence at all—is the spacing of the entry exit points for the lanes. (Las Vegas Review-Journal)

Even Gov. Steve Sisolak has gotten in on the act, claiming that the imposition of 24/7 high-occupancy vehicle lanes and the hundreds of millions of taxpayer dollars spent creating restricted carpool ramps and exits as part of the costly and disruptive Project Neon were mandated by Washington bureaucrats.

“It was part of the agreement that was made with the federal government to get the funding to get (HOV lanes) in here,” the governor said this month. “So it’s not just something that you can just eliminate suddenly.”

Sounds plausible. One problem, however: It’s not true.

There were no federal requirements — none — forcing the Nevada Department of Transportation to build HOV lanes as part of Project Neon. The Congestion Mitigation and Air Quality Improvement Program (CMAQ), administrated by the federal government, does demand that road projects constructed with funds provided under the act include high-occupancy vehicle lanes. But while the Federal Highway Administration reports that Nevada received more than $34 million in such funds for fiscal 2019, NDOT spokesman Tony Illia said no CMAQ money was used for Project Neon.

In addition, NDOT’s decision to convert all HOV lanes to 24/7 enforcement was made arbitrarily and independently. Nothing in federal law requires carpool lanes outside of peak traffic hours.

After initially pointing to CMAQ requirements to justify the expanded HOV system, Mr. Illia last week cited a 2002 lawsuit brought by the Sierra Club in an effort to scuttle an earlier expansion of U.S. Highway 95 west of the Spaghetti Bowl. As part of a settlement in 2005, the state agreed to take various measures to reduce air pollution near three schools close to the highway. HOV lanes are part of that commitment, Mr. Illia explained.

Again, however, nothing in that 14-year-old settlement necessitates 24/7 HOV lanes in 2020. The schools in question are all a good distance away from the carpool flyovers and ramps built near the intersection of U.S 95 and Interstate 15 and far removed from the HOV restrictions on I-15.

Gov. Sisolak insists the state will study HOV lane usage for at least 18 months before making any changes. NDOT’s director, however, said it will be three years before the agency can “conduct a formal review and comprehensive assessment of HOV operations after collecting, collating and analyzing three years of data.”

But don’t expect NDOT’s “formal review” to include much more than basic traffic counts. Despite having a more limited HOV network in place in Southern Nevada for more than a decade, state transportation officials have virtually no data on who actually uses the lanes or whether they have increased carpooling.

Regular freeway drivers, however, already know the answers. “They’re being used the same today as the day they first opened,” Las Vegas City Councilman Stavros Anthony said. “There’s nobody using them. Most of the drivers are single drivers, and if they are two per occupancy, they were probably driving as a double-occupant anyway. … The HOV lanes are not causing people to double-up, and they aren’t taking vehicles off the freeway.”

Southern Nevada’s HOV network is a monument to fashionable environmentalism. Meantime, the Nevada Highway Patrol must now waste time enforcing HOV restrictions at the expense of more serious priorities, and local taxpayers who helped pay for the cost of Project Neon are prohibited from using its most beneficial features. None of this makes sense, particularly when there is scant evidence that restricting usage and placing more burdens on general-use lanes reduces congestion any more than simply opening up new freeway capacity to all motorists.

Contrary to Gov. Sisolak’s assertions, there are no federal roadblocks preventing the state from scrapping the carpool restrictions that accompanied Project Neon, the state’s most expensive public works project. Mr. Anthony and other local officials should continue to turn up the heat. At a minimum, state officials should immediately drop the 24/7 restrictions, opening up the lanes to all drivers, outside limited morning and afternoon commute times.

All these excuses for inaction don’t add up.