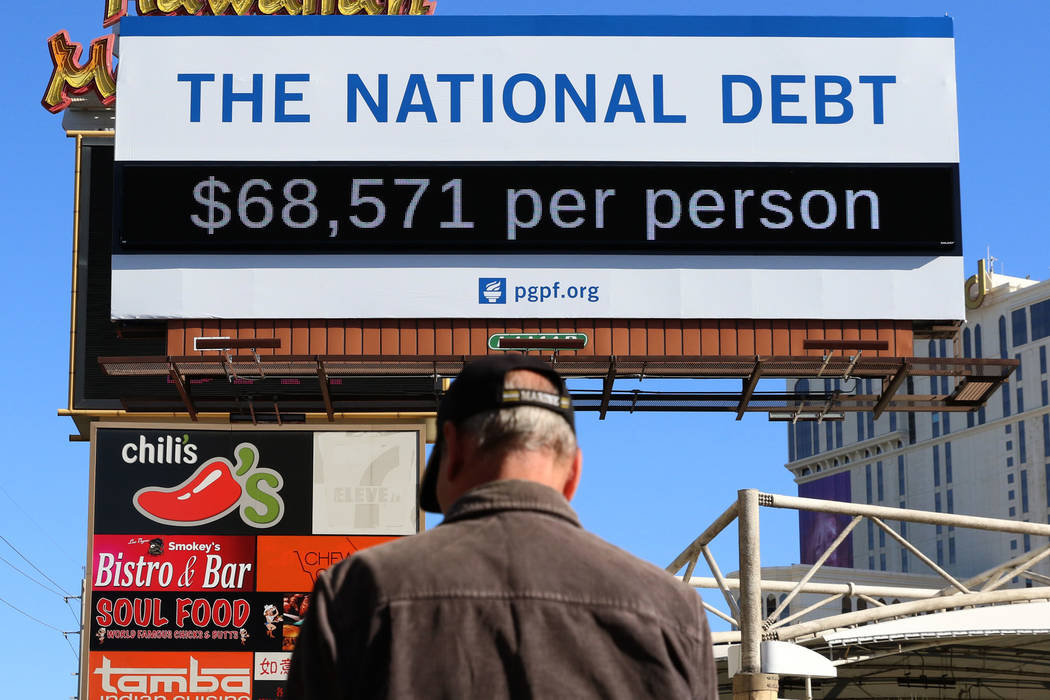 If only “What happens in Vegas, stays in Vegas,” applied to the national debt.

Last week, the Peter G. Peterson Foundation erected a national debt clock on a Strip billboard. It features a running total of the debt — around $22.6 trillion and rising by the second. Because that number is unimaginably large, it also showed the share of debt each American owes. That now approaches $69,000 — for every man, woman and child.

This is the most important topic almost no politician wants to talk about. President Donald Trump has had several high-profile successes during his first term. Debt reduction, however, hasn’t been among them. The government is running an annual deficit of more than $1 trillion, with no end in sight.

Democrats like to blame the Trump tax reform passed two years ago. But federal revenues have long been on a one-way trajectory — straight up. Washington doesn’t have a revenue problem, it suffers from a debilitating spending addiction.

Consider entitlement programs such as Social Security and Medicare. Even before he officially launched his presidential campaign, Mr. Trump said he wouldn’t reform Social Security or Medicare to make them more viable in the long term. That’s not realistic if we expect future younger workers to ever see a portion of their current contributions. The Social Security Administration projects that its reserve fund will run dry in 2036. Absent a congressional fix, benefits will be automatically reduced. Given how untenable that would be politically, there would likely be a payroll tax increase. Projections also show that Medicare will be out of money by 2026.

There’s an important reason to address these issues now. It makes the solutions less painful.

While Mr. Trump doesn’t want to address the deficit problem, Democrat presidential candidates are outbidding themselves to make it worse. Several candidates, most notably Sens. Bernie Sanders and Elizabeth Warren, are calling for “Medicare for All.” The artificially low cost estimate for that boondoggle is $32 trillion over 10 years. To put that number into perspective, consider that the combined mortgage debt for every American is $10.3 trillion. Sen. Warren won’t even be honest with the American people and acknowledge that the price tag of her new handouts — including universal child care, wiping out most student loan debt and a federal housing program — will require a massive middle-class tax hike.

These aren’t even the most expensive of the plans. The major Democratic presidential candidates have all signaled some level of support for the Green New Deal. That environmentalists’ pipe dream would cost between $52 trillion and $93 trillion. Massive new taxes on the “rich” won’t begin to finance the need of Washington pols to mainline other people’s money.

And the debt clock flies upward, a monument to the dangers of Beltway profligacy.