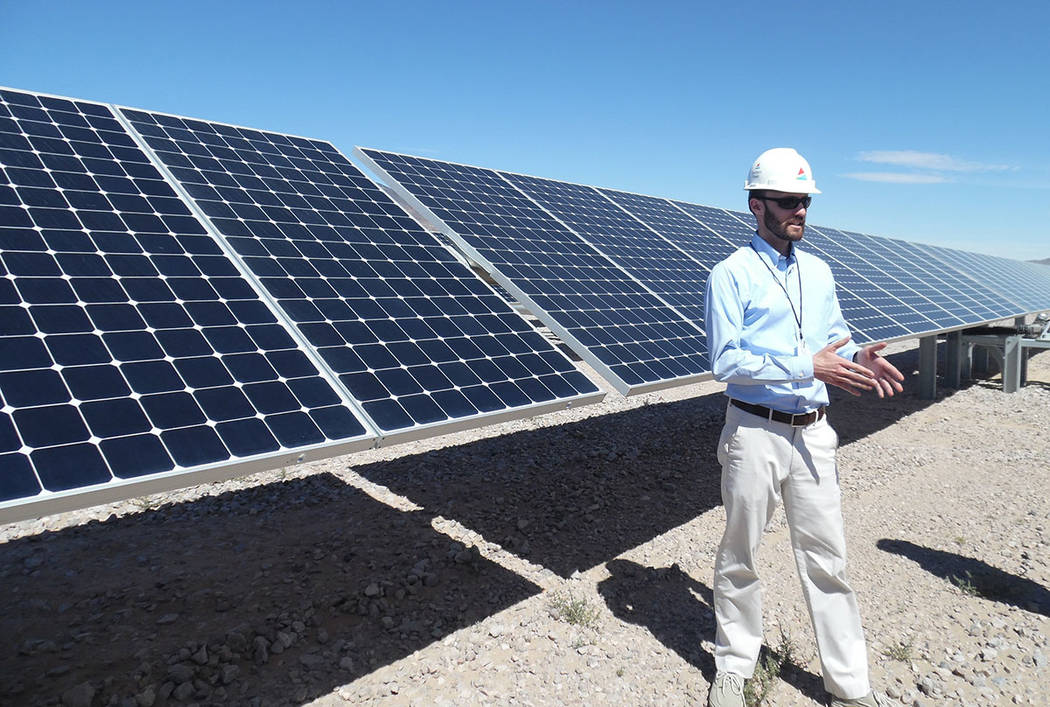 Andew deRussy, an engineer with Southern Power's engineering and maintenance team, explains how energy is generated on each module on the solar panel during a tour of the Boulder Solar I facilty in the Eldorado Valley in 2017. (Hali Bernstein Saylor/Boulder City Review)

Green energy isn’t very green. That’s the surprising contention of a new documentary backed by Michael Moore. Yes, that Michael Moore. The same radical collectivist who’s made a career of putting out liberal propaganda films such as “Bowling for Columbine” and “Sicko.”

“Planet of the Humans” is a new documentary directed by Jeff Gibbs, who produced “Bowling for Columbine.” Mr. Moore is the film’s executive producer, and the movie recently debuted at his Traverse City Film Festival in Michigan.

According to The Associated Press, the film asserts that environmentalists have oversold the benefits of renewable energy. Some of the film’s findings are eye-opening.

Environmentalists point to Germany as a country that’s doing it right, with more than 35 percent of its power coming from renewable sources. The movie finds, however, that 70 percent of the power Germany counts as renewable comes from biomass — a fancy term for burning trees. Biomass releases 50 percent more carbon dioxide than coal and more than three times as much as natural gas. Ironically, Germany receives carbon credits for every tree it burns.

Mr. Gibbs and Mr. Moore critique wind energy for requiring enormous amounts of copper and rare earth minerals. Wind farms also require developing large tracts of land. Solar energy gets dinged for its dependence on mining coal and quartz. They were even shocked to find a company owned by Charles and David Koch receiving solar tax credits. Electric cars sound great, but they depend on the fossil-fuel-powered electrical grid.

Even Al Gore gets dinged, with the film asserting that he’s more focused on cashing in than saving the planet.

“It was kind of crushing to discover that the things I believed in weren’t real,” Mr. Gibbs told the AP. “Not only are the solar panels and wind turbines not going to save us … but (also) that there is this whole dark side of the corporate money.”

They aren’t the only ones who’ve noticed that renewable energy is heavily dependent on things that aren’t so renewable. Writing in The Wall Street Journal, Mark Mills notes that wind turbines and solar panels consist of nonrenewable parts. If enough solar panels are produced to meet the 2050 Paris Accords goals, the resulting waste will weigh more than twice as much as the world’s current plastic waste. An electric-car battery requires extracting and processing more than 500,000 pounds of raw materials.

As Mr. Moore and Mr. Gibbs have uncovered, renewable energy proponents have been much better at making promises than keeping them. But the duo seem particularly aghast to discover that government subsidies are like lanterns to a moth and that any transition to green energy will require massive investment from evil industrialists and capitalists who might turn a profit. Who knew?