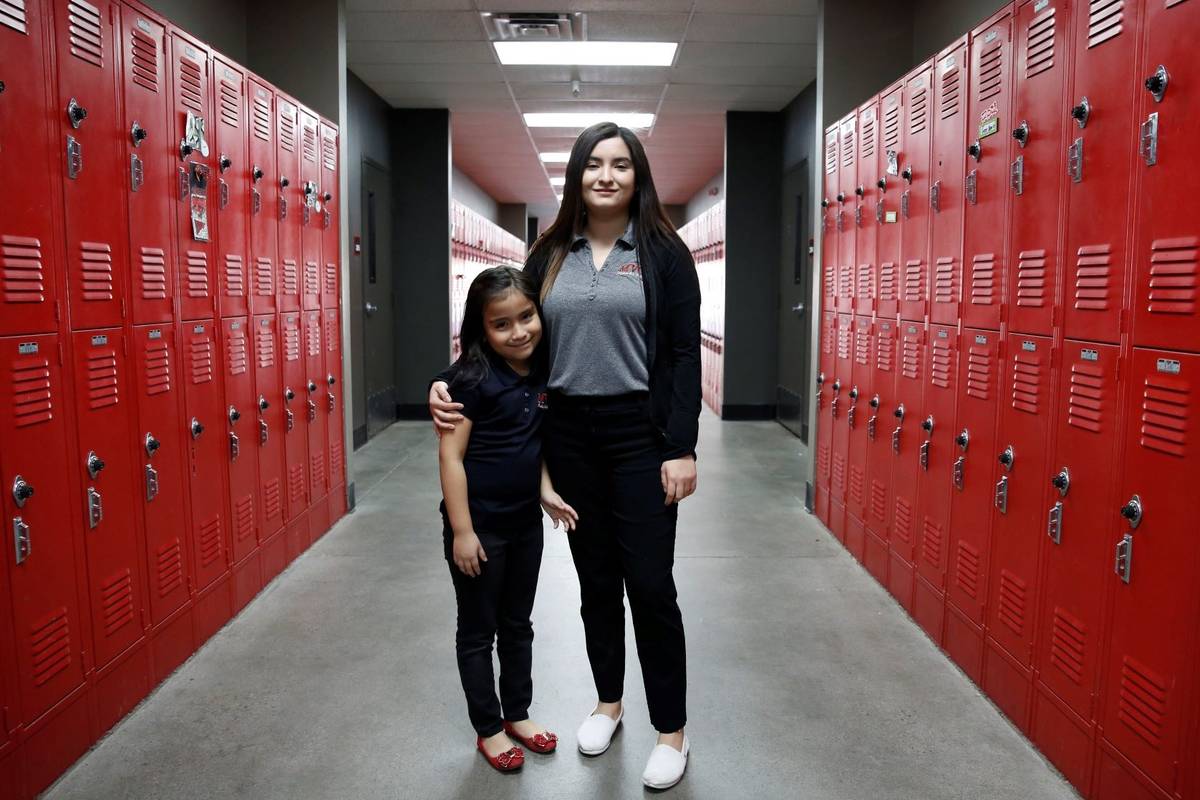 Daniela Lopez, a high school senior at Mountain View Christian School, right, poses for photo with her sister, Kiara Alvarez Vega, 6, also a student at MVCS, inside their school in this January 2018, file photo. Daniela was able to attend Mountain View as a result of Nevada's school choice program. (Bizuayehu Tesfaye/Las Vegas Review-Journal)

The future of school choice in Nevada may depend on the state Supreme Court’s willingness to uphold the Gibbons Tax Restraint Initiative.

This month, the Nevada Supreme Court heard arguments in a case involving the Opportunity Scholarship program. School choice isn’t the only thing at stake. So is the constitutional requirement — overwhelmingly passed twice by voters — that bills increasing revenue require a two-thirds vote in both houses.

The Legislature allocated $5 million in tax credits during the first year of the program. In subsequent years, that amount was to increase by 10 percent annually. The annual growth was on automatic pilot and did not require subsequent legislative approval. Thus, if lawmakers reduce the amount of available tax credits, the result is an increase in state revenue.

But any bill that increases revenue requires two-thirds approval in both houses. Nevada voters added that requirement to the state constitution in the mid-1990s. The language is intentionally broad. The mandate applies to any bill “which creates, generates or increases revenue in any form.”

In 2019, Democrats removed the 10 percent growth component in the original Opportunity Scholarship legislation without a single Republican vote. Most Democrats have long opposed school choice in lockstep with teachers unions, which fear the competition.

Notably, the Department of Taxation tagged the proposal with a fiscal note, finding that the change “would increase general fund revenue by $665,500 in fiscal year 2019-20” and by even more in later years. No surprise. That was the whole point of the bill.

That should have triggered the two-thirds requirement. But the Legislative Counsel Bureau — which has lately become an arm of majority leadership — declared the proposal needed only a simple majority in each house. The bill subsequently failed to receive a two-thirds majority in the Senate. The Institute for Justice, representing those affected by the change, sued.

“In this case, what ultimately happened is the Legislature froze those tax credits,” LCB lawyer Kevin Powers told the Supreme Court during oral arguments. “So the revenue stream is flat. It remains the same.”

This is a clever way to avoid the point. If the Legislature hadn’t acted in 2019, the value of tax credits would have increased, reducing revenue. In this case, a flat revenue stream is proof AB458 actually increased revenue.

Note the sleight of hand here, too. The constitutional requirement applies to bills that increase revenue. A flat revenue stream may indeed be a sign that there was no increase, but that’s not always the case, as Mr. Powers wants to the court to believe.

This didn’t used to be controversial. Just a few years ago, the LCB itself required a two-thirds vote on a bill extending temporary tax increases. Now, Mr. Powers argues those types of bills don’t increase revenue.

This distinction has far-reaching implications. In 2019, legislative Democrats passed two other bills by simple majority that extended taxes which were set to decline. Nevada Senate Republicans sued. Last September, a District Court judge ruled that violated the state constitution’s two-thirds requirement. Undoubtedly, the Supreme Court will get the final word on that case.

If legislative Democrats find the Gibbons Tax Restraint provision to be inconvenient, they are free to persuade voters to change it. But let’s not pretend it doesn’t mean what it explicitly says. There’s no wiggle room there even if Democrats hope the Nevada Supreme Court allows them to invent some. Instead, the justices should rule accordingly and find that “any” increase in revenue means any increase.