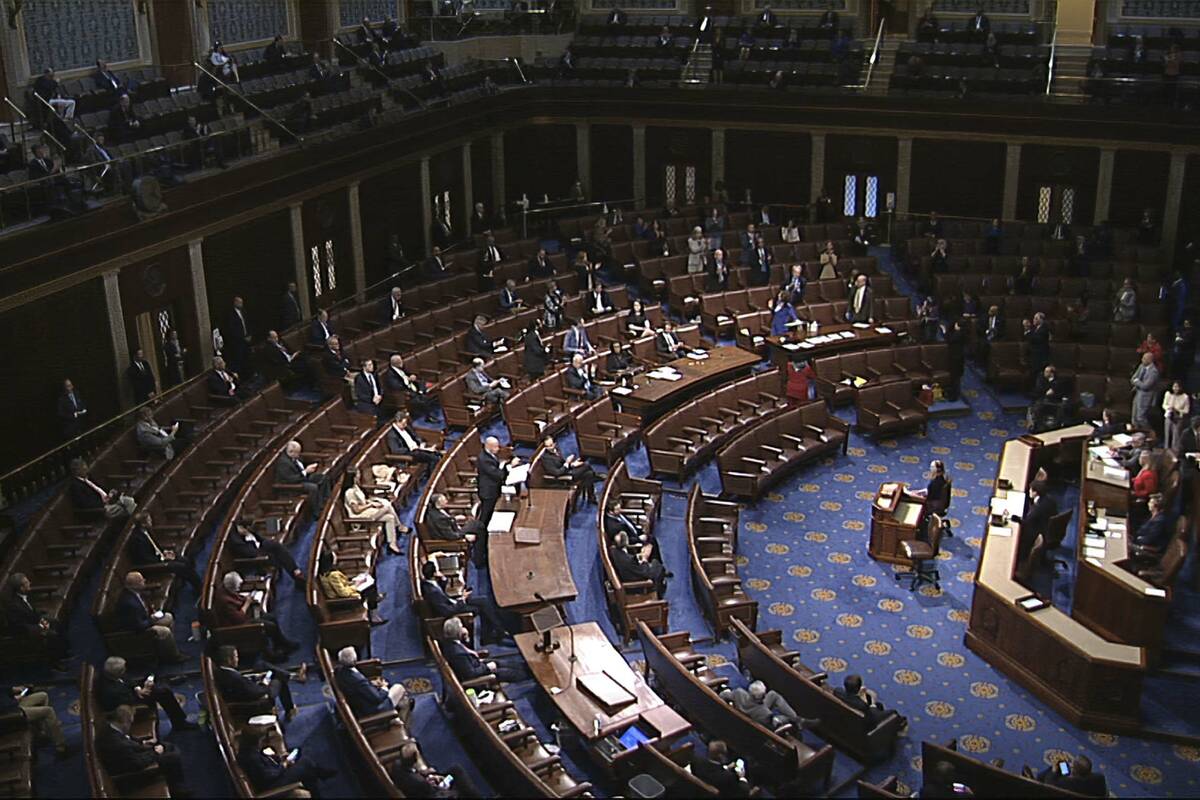 In this image from video, members of the House debate on the coronavirus stimulus package on the floor of the House of Representatives at the U.S. Capitol in Washington, Friday, March 27, 2020. (House Television via AP)

The White House drove the country into an inflation mess because it refused to listen to economists and others who predicted the administration’s massive multitrillion-dollar spending spree would overheat the economy. Next time — let’s hope there isn’t a next time, but … — such willful ignorance may be more difficult to maintain thanks to a change in how the House scores legislation.

It was 18 months ago that President Joe Biden uttered the famously wrong line, “There’s nobody suggesting there’s unchecked inflation on the way — no serious economist.” Oops. Months later, annualized inflation was running at 9.1 percent, a 40-year high, evoking memories of Jimmy Carter.

The president had been warned by even some liberal economists but chose instead to take the magic beans and depend on the counsel of those who argued that the government can print unlimited amounts of money without consequence.

Since then, inflation has slowed somewhat but remains problematic. The Bureau of Labor Statistics reported last week that December numbers showed prices climbing by 6.5 percent compared with 12 months earlier. While that’s down somewhat from last year’s highs, consumers remain bushwhacked by high food prices, which have climbed a whopping 11.8 percent in the past year.

For reference, the inflation rate was 1.4 percent when Mr. Biden entered the Oval Office just two years ago.

Mr. Biden and Democrats no doubt have trillions more they would love to spend. But that will be more difficult with Republicans now running the House. In addition, a new House rule negotiated as part of the deal that elevated Kevin McCarthy to speaker will potentially sound the alarm bell about the ramifications of runaway government outlays.

The new requirement, Roll Call reports, would demand that “the Congressional Budget Office and Joint Committee on Taxation to incorporate macroeconomic effects, like changes in economic output and employment and inflationary impacts, into their official cost estimates for ‘major’ legislation.”

Such analysis by the nonpartisan budget scorekeepers employed by Congress will shine a light on how huge government spending bills can distort the economy, crippling job creators, stunting economic growth and … yes … even creating inflationary pressures. That, in turn, will potentially make it more challenging for Mr. Biden and the modern monetary theory adherents to hoodwink the voters about their reckless policies.

Republicans were properly chastised for the chaos surrounding their efforts to elect a new speaker. But a handful of the concessions to which Rep. McCarthy agreed represent a step forward in exposing fiscal lunacy. More complete analysis of the consequences of major spending bills is one such example.