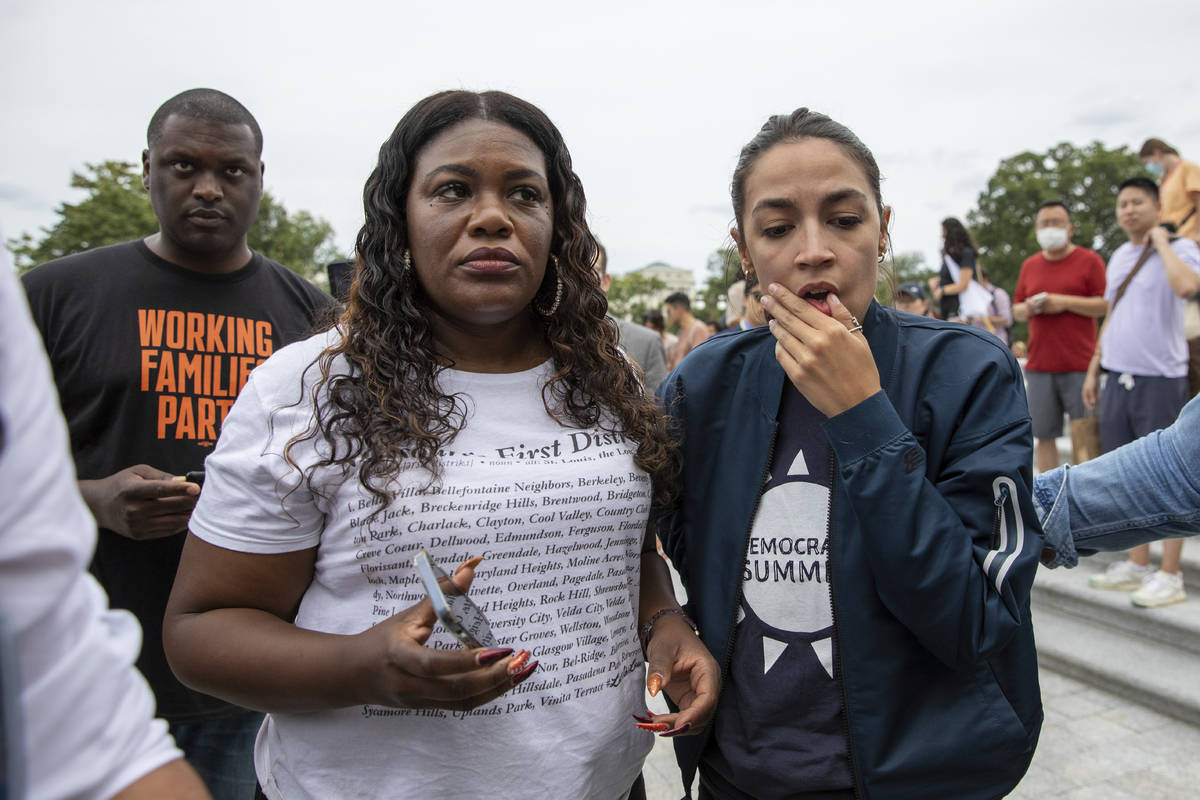 Rep. Cori Bush, D-Mo., and Rep. Alexandria Ocasio-Cortez, D-N.Y., react to the announcement that the Biden administration will enact a targeted nationwide eviction moratorium outside of Capitol Hill in Washington on Tuesday, Aug. 3, 2021. (AP Photo/Amanda Andrade-Rhoades)

But when staffers at Current Affairs sought to create a socialist-style worker co-op, Mr. Robinson fired them for acting like, well, socialists.

The five banished staffers outlined the drama via a group letter on Twitter.

“On August 8th, editor-in-chief Nathan J. Robinson (author of “Why You Should Be a Socialist”) unilaterally fired most of the workforce to avoid an organizational restructuring that would limit his personal power,” they wrote in a letter posted by Lyta Gold, the former managing and amusements editor. “Yes, we were fired by the editor-in-chief of a socialist magazine for trying to start a worker co-op.”

The fired workers wrote that staffers had been exploring different organizational models to better represent the publication’s socialist values. The business manager was even supposed to “help shepherd the magazine through the process of creating a more democratic workplace.”

“When we finally got around to discussing organizational models during a Zoom meeting on August 7th, Nathan became agitated,” they wrote. “He insisted that in our attempt to set shared internal values, we were disregarding his vision for the Current Affairs as published in the first issue.”

As the magazine grew, his vision evolved — and it didn’t look so egalitarian.

“The organization has been heading slowly for some sort of reckoning where it was going to have to be made clear once and for all what kind of authority I wanted to have over it,” he wrote in an email. “And I was in denial about the fact that the answer is I think I should be on top of the org chart, with everyone else selected by me and reporting to me.”

He added that he “still thought of it as my project over which I should have control.”

This is a normal and even healthy feeling. Part of creating an organization is being in charge of it. You might even call it pride of ownership. That’s something that comes along with private property rights.

Of course, if you’re running an organization dedicated to advancing the idea of community ownership, that same worldview is bound to cause some problems.

The workers said that Mr. Robinson has since tried to take back his comments. He agreed to pay them through September, although the magazine will “take a one-month hiatus.” To be fair, paying people who aren’t working does seem more on brand for a socialist publication.

Perhaps this will offer those involved time to reflect on why socialism and its collectivist cousin, communism, continue to fail spectacularly in the real world.