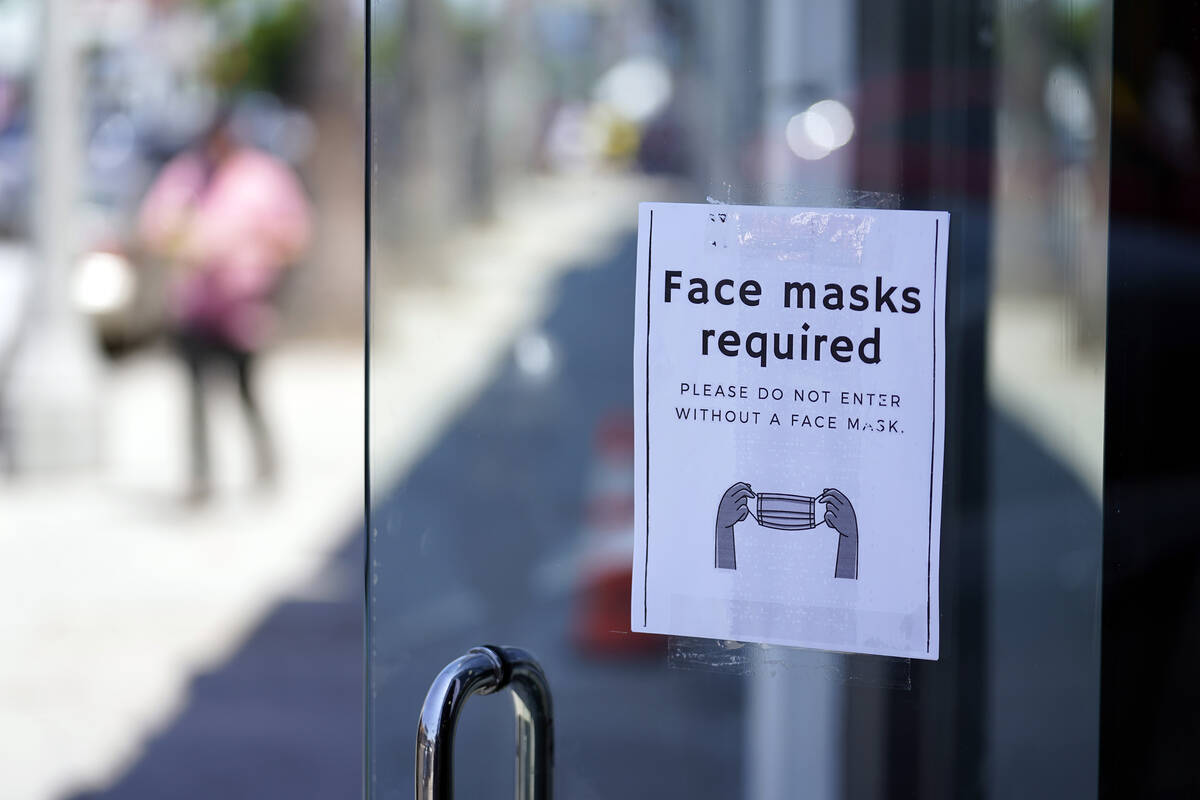 With confirmed case counts quickly falling in Clark County, public health officials believe the latest coronavirus surge is in retreat. Now would be a good time for Gov. Steve Sisolak to re-examine his mask mandate.

“I’m pretty comfortable saying that, specifically in Clark County, I think the worst of the omicron wave is over,” Kyra Morgan, state biostatistician, said Thursday.

Southern Nevada is following a pattern that can be seen in many parts of the country and abroad. When the omicron variant exerted itself in the United States in November, it spread with intensity. Yet it was far milder than previous iterations of the virus. “The available evidence suggests that Omicron is less threatening to a vaccinated person than a normal flu,” David Leonhardt of The New York Times reported. The sheer infectiousness of omicron, however, ensured it would sicken more people, causing problems for many health care facilities.

But in many places, such as South Africa and England, omicron has fallen off as quickly as it became dominant. That appears to be happening now across the United States, including in Las Vegas. And that presents an opportunity to re-examine existing COVID protocols. “When should asymptomatic people stop interrupting their lives because of a COVID exposure?” Mr. Leonhardt asks. “Above all, when does COVID prevention do more harm … than good?”

Most of Nevada has been under a mask mandate in public indoor settings since late July when Gov. Sisolak coupled his order with a Centers for Disease Control guideline on community pervasiveness of the virus. Six months later, state officials have offered little evidence that the edict has led to fewer infections. Nor are there any numbers showing that the nine other states which have imposed similar restrictions on their citizens have kept COVID at bay.

In addition, while studies have shown that surgical masks and N95 respirators can play a role in curbing the spread of the virus, the flimsy coverings used by most Americans do little to slow omicron. “Some experts have said that cloth masks are inadequate to protect from the variant,” the Times reported this month.

Mask mandates for children in schools have come under increasing scrutiny as well, given that the virus represents little danger to young people. “At the top of the list of policies we should rethink once the (omicron) wave recedes is mandatory masks for kids at school,” wrote three public health experts in The Atlantic this month, making the argument that constant masking is dangerous for the physical and mental health of children. “Two years into this pandemic,” they write, “keeping unproven measures in place is no longer justifiable.”

We have entered a new stage in this pandemic, whether some politicians want to admit it or not. Vaccines are widely available and highly effective in terms of limiting extreme cases. Omicron has greatly increased natural immunity across the U.S. population. For many Americans, the disease no longer dominates their concerns as they seek a return to normalcy after 23 long months.

A similar dynamic is at work in Europe, where the United Kingdom, Ireland, Denmark and the Netherlands have all dropped mask and other mandates in recent days.

Nevadans have largely complied with Gov. Sisolak’s mask edict for more than half a year. But the fact that the great majority of governors — Democrat or Republican — have declined to impose a similar requirement without triggering a public health calamity indicates that the governor could safely relax the restriction. Nevada’s ongoing mask order is outside the mainstream.

State public health officials said in December that the omicron variant and holiday season were reason enough to extend the mask directive into 2022. The holidays have passed and the surge is waning. Those who prefer to wear face coverings should certainly be free to do so. Likewise, employers should enjoy the autonomy to make decisions about whether workers or customers must mask up. But it’s time for Gov. Sisolak to rescind his one-size-fits-all order and to trust Nevadans to make their own risk assessments about face coverings.