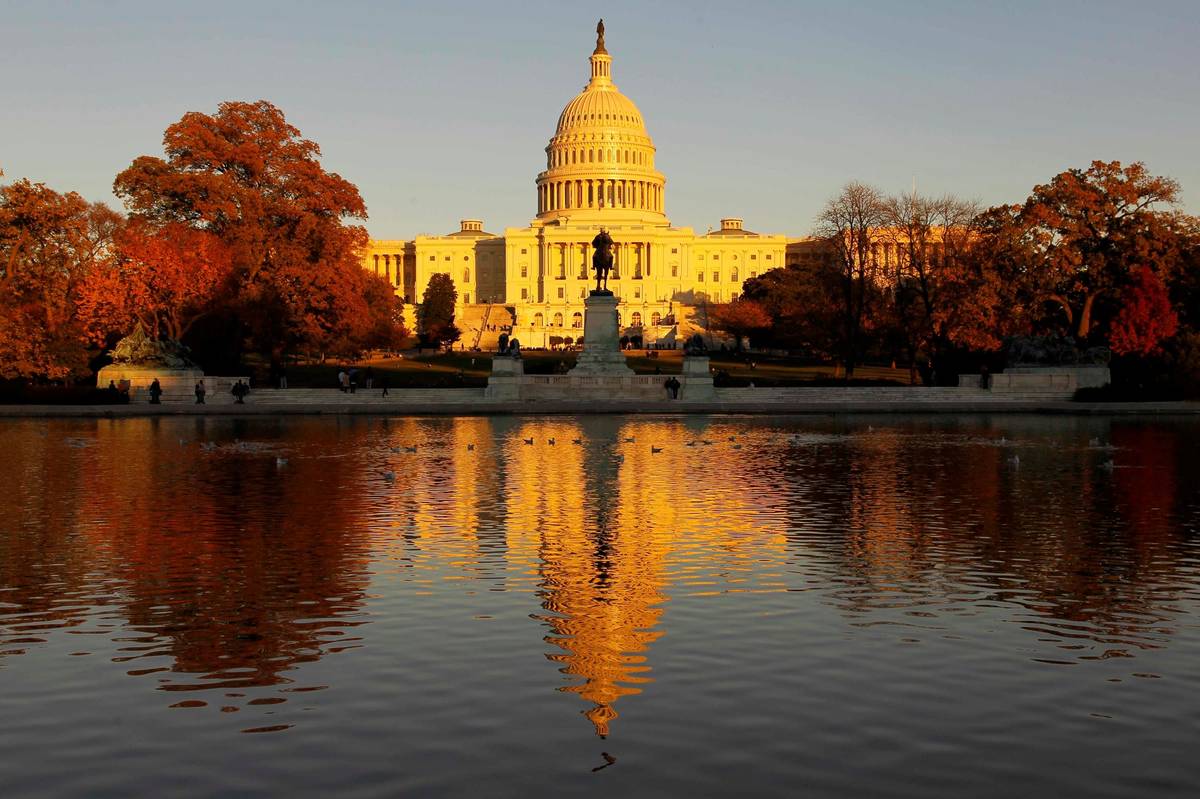 The US Capitol is bathed in the setting sun and seen in the reflecting pool on Capitol Hill in Washington. (AP Photo/Alex Brandon)

Congressional Democrats insisted that the $2.2 trillion coronavirus stimulus bill include numerous restrictions on how corporate recipients could operate after pocketing the relief. Yet as they now seek billions more to help state and local governments weather cratering tax revenues during the pandemic, Democrats are in no hurry to impose similar constraints on the public sector.

Late Monday, the two sides were near a deal to supplement the $350 billion Paycheck Protection Program with another $320 billion. Efforts to replenish the fund had been delayed thanks to partisan clamor from Democrats that such legislation also include taxpayer bailouts for state and local governments hemorrhaging tax revenue because of the economic shutdown.

But while Democrats were adamant that coronavirus relief for corporations come with a litany of conditions involving executive compensation, stock buybacks and the like, they embraced the opposite attitude regarding how the public sector could use a similar bounty. Don’t think state and local Democrats didn’t notice.

For instance, The New York Times reported that the head of the Illinois state Senate clanged his tin cup last week in an effort to secure billions in federal aid to shore up the state’s troubled public pension system. The National Governor’s Association told Congress that states need “unrestricted financial support of at least $500 billion.” Note the word “unrestricted.” Imagine how Democrats would react if the airline industry made a similar demand.

Never mind that the pension fiasco in Illinois long predates the coronavirus. Democrats now see this crisis as a convenient vehicle to force taxpayers across the country to cover the costs of the financial mismanagement that characterizes many profligate blue states.

So far, Republicans have fought off these efforts. But there’s talk of yet another stimulus, this one to provide relief to governments. The GOP will be under pressure to jump on board such legislation, and should at least insist that public-sector bailouts be conditional.

President Donald Trump and Senate Majority Leader Mitch McConnell “could use their newfound financial leverage to demand policy reforms that would diminish the long-term structural dysfunctionality” of states such as Illinois, columnist Ira Stoll suggested this week. That could include tying pension reform to the aid.

“When New York and Illinois start asking Washington for a bailout,” Mr. Stoll notes, “what they’re really doing is asking taxpayers who live in better-managed states” to pay the bill for their “gold-plated contracts with public employee unions.”

Mr. Stoll is spot on. If Democrats insist that federal taxpayers ride to the rescue of state and local governments, the president and congressional Republicans mustn’t go along absent assurances of financial reforms that put these jurisdictions on a more sustainable trajectory.