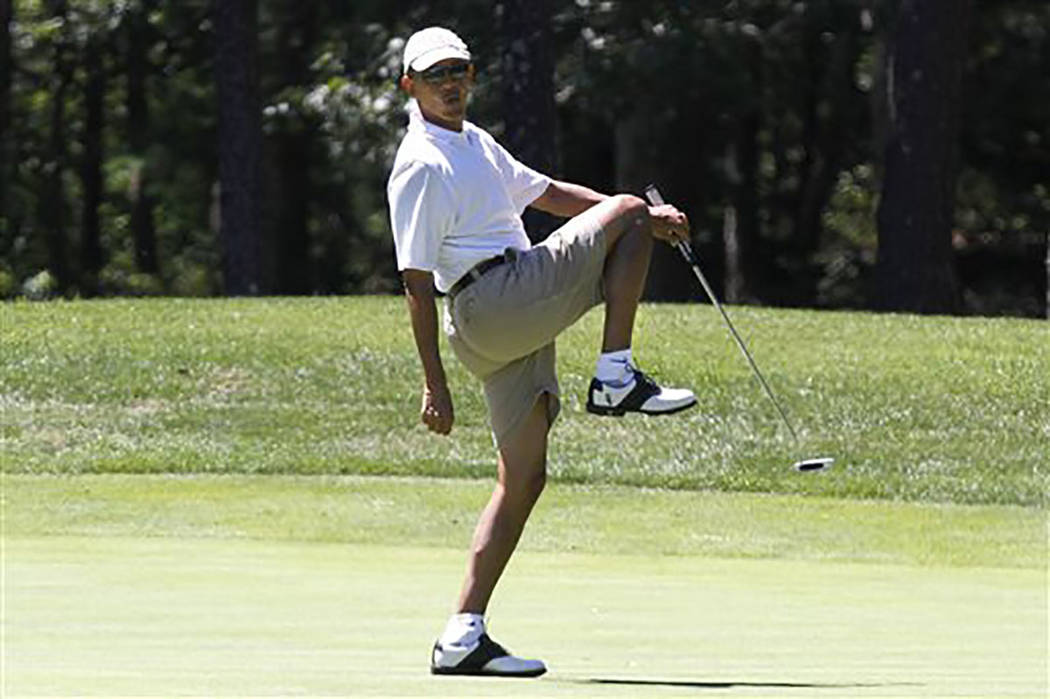 President Barack Obama reacts as he misses a shot while golfing on the first hole at Farm Neck Golf Club in Oak Bluffs, Mass., on the island of Martha's Vineyard in 2013. (AP Photo/Jacquelyn Martin)

During his first address to the United Nations, in 2009, former President Barack Obama warned that “no nation, however large or small, wealthy or poor, can escape the impact of climate change.” He told the General Assembly that “rising sea levels threaten every coastline” and “on shrinking islands, families are already being forced to flee their homes as climate refugees.”

However, given the former first couple’s impending purchase of a $14.8 million mansion on Martha’s Vineyard, the Obamas appear to be either impervious to the effects of climate change or guilty of exaggerating its dangers.

According to Forbes, the nearly 7,000-square-foot estate sits on 29 acres with a driveway roughly a third of a mile long. The sprawling home has seven bedrooms, 8.5 bathrooms, a pool surrounded by a garden and access to private beaches.

The Obamas have been renting the property since August, and are in the process of buying it from Boston Celtics owner Wyc Grousbeck.

There’s nothing wrong with the former president purchasing a large home, of course. Why, even the socialist firebrand Bernie Sanders has three properties of his own. But the optics of Mr. Obama residing in an enormous island home seem hypocritical, at best. After all, he did spend eight years lecturing the American people about the importance of minimizing their carbon footprints and the looming crisis of eroding shorelines.

In addition, Mr. Obama once famously said that at “a certain point, you’ve made enough money.” Apparently, he and Michelle haven’t reached that point. Between speaking fees, book contracts and their Netflix deal, the couple’s net worth is roughly $40 million, according to Business Insider. Good to know they still have room to work with before they begin to voluntarily turn over their assets to federal or state bureaucrats.

If comfortable members of the progressive gentry set don’t take global warming seriously, why should anyone else?

Oh, and those “shrinking islands” Mr. Obama was so worried about? Turns out the notion of rising seas swallowing up island nations is actually more climate alarmism designed to erode opposition to a massive government takeover of the American economy. Studies reveal that many of the “endangered” reef islands in the Pacific and Indian oceans have actually increased in land mass in recent years.

“The implication,” National Geographic reported in 2015, “is that many islands — especially less developed ones with few permanent structures — may cope with rising seas well into the next century.”

And that includes Martha’s Vineyard, we presume.