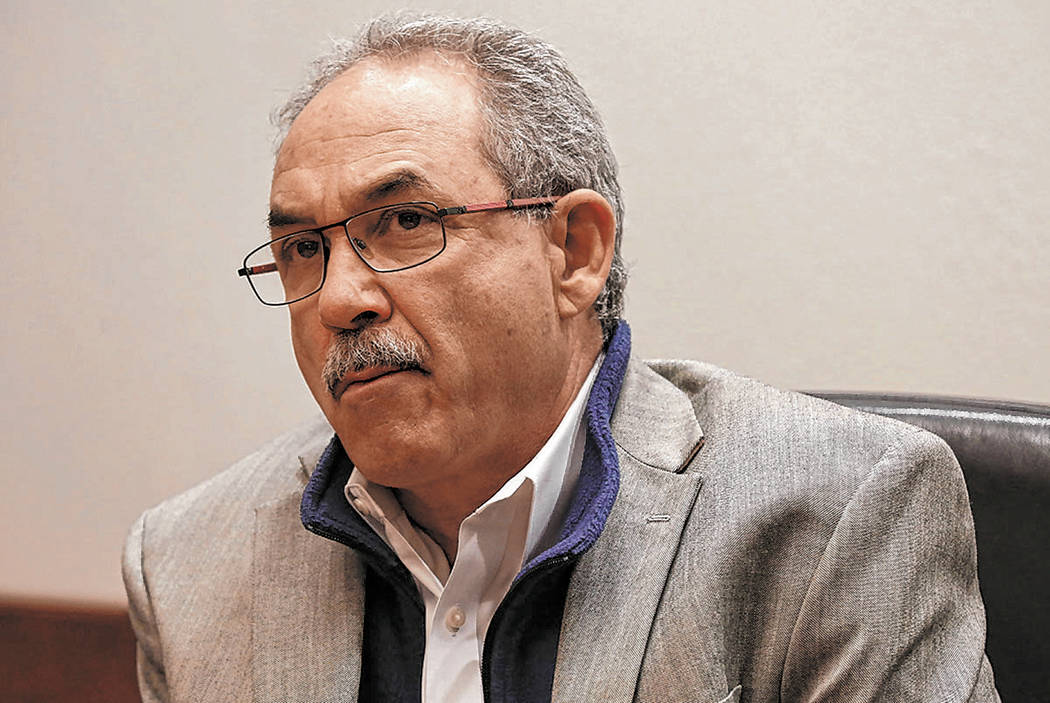 Mr. Vellardita, who runs the Clark County Education Association, finally revealed last week the details of his long-simmering plan to transfer billions of dollars from taxpayers to his labor organization. The breadth of the money grab is impressive.

First, the union seeks to raise taxes by $300 million each year on the state’s largest gaming companies, which already supply nearly 40 percent of the Nevada’s general fund budget. (Full disclosure: The Review-Journal’s ownership also owns Strip casinos. But this paper has a well-documented, decades-long track record of skepticism when it comes to large tax hikes.) Mr. Vellardita seeks to qualify the gaming tax hike for the ballot, either forcing lawmakers to act in 2021 or putting the question before voters in 2022.

Next, the union unveiled a similar plan for the sales tax. Mr. Vellardita seeks to boost the levy by 1.5 percentage points and direct the money toward statewide education spending. Once again, the strategy is to qualify the proposal as an initiative, either forcing the Legislature to enact the tax hike next year or allowing Nevada voters to pass judgment in 2022. If enacted, this measure would jack the pot by a projected $1.1 billion annually while saddling Clark County residents with one of the country’s highest sales tax rates.

The combined effect of these tax hikes would be to separate taxpayers from their money to the tune of $1.4 billion each year. To put that in perspective, the state’s entire general fund revenue stream didn’t hit $1.4 billion until the late 1990s. Let’s also not forget that this comes less than five years after lawmakers imposed the largest tax hike in state history to boost public school funding.

“This vote,” then-Gov. Brian Sandoval said in 2015 after the Legislature passed the $1.4 billion tax package, “moves us one step closer to cementing the legacy of public education by both raising accountability as well as increasing investment in order to suit the needs of generations to come.”

That was then, this is now. It seems like such a long time ago. And recall that legislative Democrats cynically responded in later sessions by repealing or watering down many of the promising education reforms that accompanied that tax increase.

Speaking of accountability, there is nothing of the sort included in either of Mr. Vellardita’s proposals. Instead, the union boss envisions all sorts of expensive initiatives, including smaller class sizes (read: more teachers, thus more union dues), additional teacher raises and “providing economic security” (read: more money) for educators as a means of reducing attrition.

Conspicuously absent from Mr. Vellardita’s grand blueprint is any mention of student achievement or what Nevadans can expect to get in return for their greatly enhanced contributions. Will taxpayers receive refunds if the massive influx of cash fails to move the needle when it comes to the state’s dismal math and reading scores? Will the new levies eventually sunset (hardy har har!) absent evidence of any concrete academic progress? Will anything be done to address underperforming administrators or teachers?

We all know the answers to these questions because they’re part of a pattern that’s been repeated over and over again in which taxpayers are asked to shovel more and more money into the education establishment’s black hole because this time … well, because we’ve never really tried this approach and this time it’s sure to work. When the results are spotty, at best, self-styled education activists blame a lack of resources and again break out the beggars gear. Rinse and repeat.

Mr. Vellardita is a smart man who has shown an occasional unconventional streak by his willingness to challenge convention and accept reform such as increased school choice. Politically, this tax gambit may be a chip intended to get the various players to the negotiating table to facilitate some sort of bipartisan deal next year in Carson City. Perhaps he has more to offer. We’ll see. Because asking Nevadans to approve billions in new school taxes — absent any serious measures designed to improve student outcomes — is not without risk.