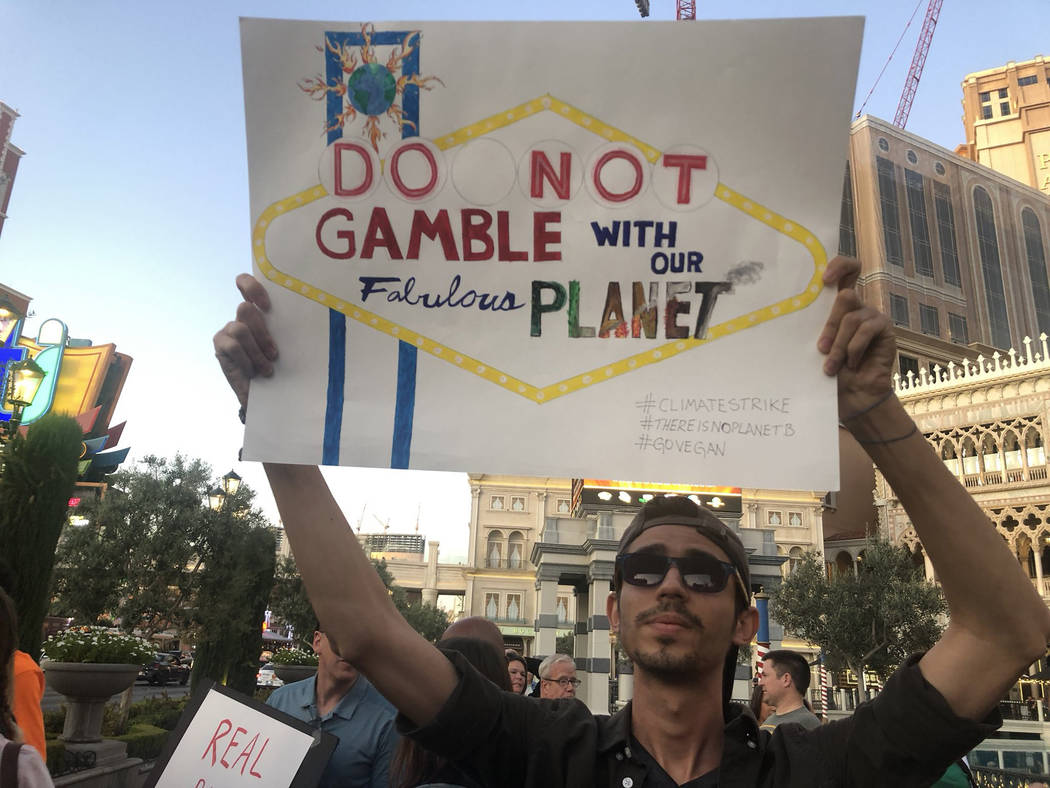 Katelyn Newberg/Las Vegas Review-Journal Israan Mendes, 24, holds a sign as more than 100 people protest Friday, Sept. 20, 2019, outside The Venetian in Las Vegas as part of a “global climate strike” to demand action to fight climate change.

It’s easy to preen when railing against fossil fuels. It’s much harder to stop using them. Just ask students at Saint John’s College at Oxford University.

Last month, a group of protesters at the prestigious English university demanded that the administration divest from fossil fuel companies. Obviously, entitled and grandstanding students aren’t limited to the west side of the Atlantic. The students were upset that the college has millions of pounds invested in fossil fuel companies, such as BP and Shell. They also wanted the college to declare a “climate emergency.”

“I am not able to arrange any divestment at short notice,” he wrote, as reported by the Times of London. “But I can arrange for the gas central heating in college to be switched off with immediate effect. Please let me know if you support this proposal.”

Turns out that shivering throughout the night is too high a price to pay for stopping a climate emergency. One of the students who issued the demand accused Mr. Parker of not taking them seriously.

“You are right that I am being provocative, but I am provoking some clear thinking, I hope,” he retorted. “It is all too easy to request others to do things that carry no personal cost to yourself. The question is whether you and others are prepared to make personal sacrifices to achieve the goals of environmental improvement.”

This logic was too much for Fergus Green, a graduate student who helped organize a larger climate protest.

“This is an inappropriate and flippant response by the bursar to what we were hoping would be a mature discussion,” Mr. Green said. “It’s January, and it would be borderline dangerous to switch off the central heating.”

Yes, turning off the heat when it’s freezing outside isn’t comfortable or safe. But that would be the result were climate protesters to succeed in shutting down natural gas and other fossil fuel companies. Eliminating such energy sources doesn’t eliminate the need for human beings to stay warm. The traditional method of heating homes — wood-burning stoves — isn’t great for the environment or reducing carbon emissions either.

This hypocrisy is a significant and common problem for climate change alarmists. Consider Democratic presidential front-runner Sen. Bernie Sanders, who urges the complete decarbonization of the economy by 2050. He also spent $1.2 million last quarter on private jets, tops in the field.

A word of advice to those concerned about climate change. Before you advocate draconian energy policies, be ready to propose solutions you’re willing to tolerate yourselves.