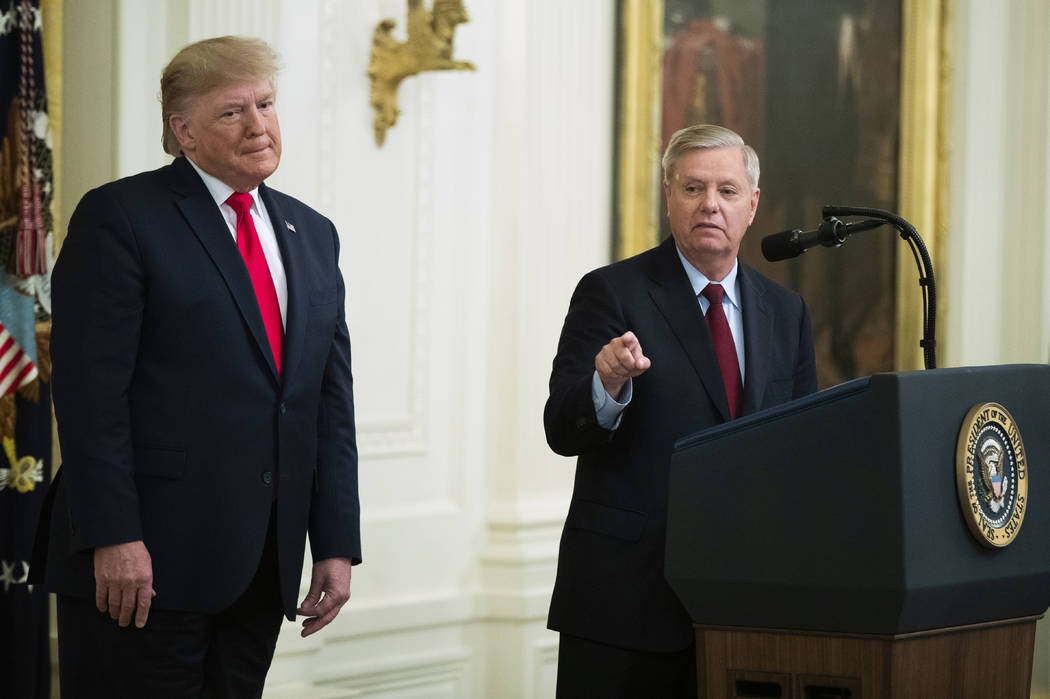 President Donald Trump listens to Sen. Lindsey Graham, R-S.C., speak during a ceremony in the East Room of the White House where Trump spoke about his judicial appointments, Wednesday, Nov. 6, 2019, in Washington. (AP Photo/Manuel Balce Ceneta)

Sen. Lindsey Graham of South Carolina was a courageous Republican when he took on rival presidential hopeful Donald Trump in 2016. Then, in 2019, Graham became a spineless specimen — at least according to his detractors — because he learned how to work with Trump.

I know because I’m on Twitter where tweeps frequently hail the like-minded for their breathtaking bravery in taking a stand with which the Twitterer agrees, while denouncing those with different views as quivering curs.

There’s something called a Courage Campaign that is fighting for a more progressive politics — and it issues a “courage score,” described as “The People’s Report Card of California.” Surprise: The report card pretty much awards A’s to very progressive state lawmakers, C’s to the rare moderate Democrat and lousy grades for conservatives.

Because we all know the amazing courage one must have to support liberal policies in California.

As the impeachment proceeding continues and the prospect of a Senate trial looms, the usual scolds are sharpening their dull knives and lamenting the lack of Republicans who have the backbone to support impeachment.

Do these same virtue signalers laud the pluck of Reps. Collin Peterson of Minnesota and Jeff Van Drew of New Jersey — the two Democrats who bucked their party and voted against holding House impeachment hearings? Not so you’d notice.

Does anyone really think that only two House Democrats think that impeachment is a bad idea — even though it is almost assured that the GOP Senate will not convict?

I should hope that having seen what happened after Bill Clinton’s impeachment — Clinton’s poll numbers remained high, the Senate did not convict and Democrats gained five seats — there are more than two House Democrats who see impeachment as a losing proposition.

Figure the rest are true believers who want to punish Trump for doing wrong, or they’re realists who understand that in 2019, few voters want nuance.

During the 2016 primary, Graham was a sharp Trump critic — he called Trump a “jackass” — and he didn’t vote for Trump in November. For that reason, Never Trumpers are sorely disappointed that he found a way to work with Trump, even to tee off with the president at a Trump property.

They apparently think it’s nobler to sulk in a corner, call POTUS names and not listen to the voters who put Trump into the Oval Office.

But as Graham told The New York Times Magazine, “If you don’t want to get re-elected, you’re in the wrong business.”

For the record, I think it was wrong — inexcusable — for Trump to suggest that Ukrainian President Volodymyr Zelenskiy look for dirt on former Vice President Joe Biden and his son Hunter, who somehow made some $50,000 a month working for a well-connected Ukrainian energy company.

I also don’t think the former veep should have styled himself as the American enforcer ready to take on Kyiv corruption while his son was living large Kyiv-style.

But after two and a half years watching the left bet it all on a Russian scandal that never paid off, I’m all for leaving Trump’s fate to the voters in 2020.

Graham probably saw his finest moment last year when he challenged Senate Democrats’ effort to sink Brett Kavanaugh’s nomination to the U.S. Supreme Court by sliming the new justice’s reputation with unsubstantiated accusations that went back to his high school years. It was a dark moment, as Democrats forgot the very basic American tenet that the burden of proof is on the accuser, not the accused.

It didn’t take courage for Graham to change the atmosphere in the Senate that day — he’d just had enough.

And he’s not alone.