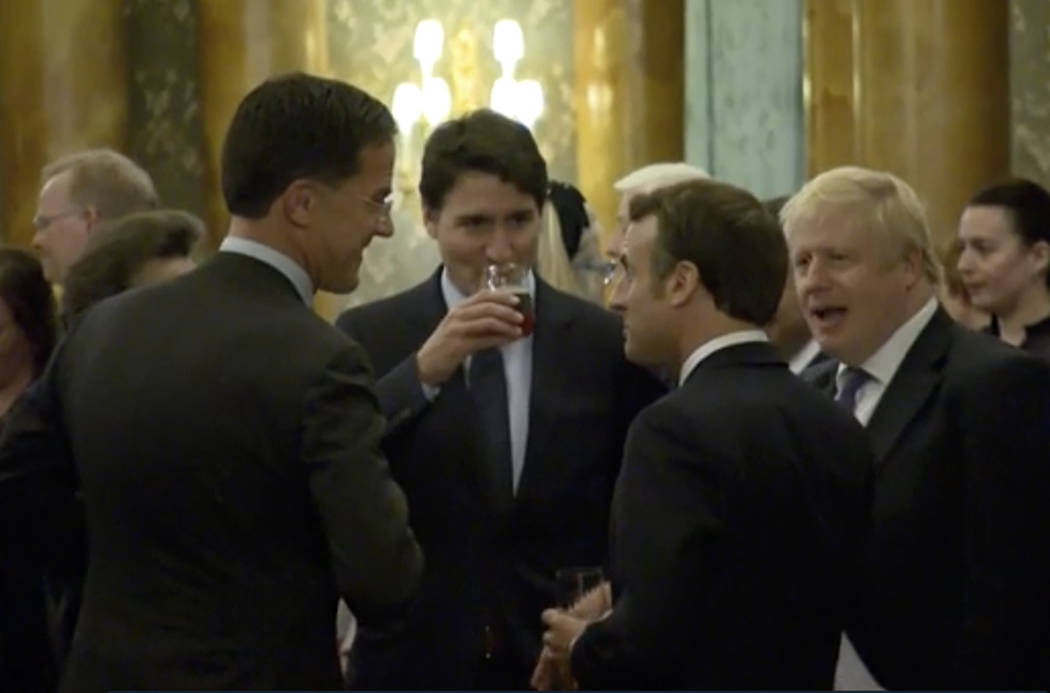 In this grab taken from video on Tuesday, Dec. 3, 2019, Britain's Prime Minister Boris Johnson, right, speaks during a NATO reception. While NATO leaders are professing unity as they gather for a summit near London, several seem to have been caught in an unguarded exchange on camera apparently gossiping about U.S. President Donald Trump’s behavior. In footage recorded during a reception at Buckingham Palace on Tuesday, Canadian Prime Minister Justin Trudeau was seen standing in a huddle with French President Emmanuel Macron, British Prime Minister Boris Johnson, Dutch Prime Minister Mark Rutte and Britain’s Princess Anne. (Host Broadcaster via AP)

On Wednesday, President Donald Trump abruptly left a NATO summit near London and canceled a scheduled news conference after Canadian Prime Minister Justin Trudeau was caught on camera amusing fellow big shots as he marveled at Trump’s long-winded sessions with the press. He exhibited a classic case of being able to dish it out but not take it.

Foreign policy guru Ian Bremmer tweeted out the video with a comment: “This happens at every NATO summit with Trump. Every G7. Every G20. The US President is mocked by US allies behind his back.”

Having watched the video repeatedly, I think Trudeau wasn’t so much mocking Trump as commiserating with British Prime Minister Boris Johnson, French President Emmanuel Macron and Dutch Prime Minister Mark Rutte. All three have had their own experiences playing minor characters with bit speaking parts as Leading Man Trump delivers soliloquies to the press pool.

It’s common for leaders to take a couple of press questions at these meet-and-greet sessions. But Trump likes to hear himself talk so much that his press availabilities with NATO Secretary General Jens Stoltenberg, Macron and Trudeau lasted about 52 minutes, 39 minutes and 30 minutes, respectively. If Trump talked for another hour, they could have winded up on Gilligan’s island.

Trump tweeted he canceled the presser because “we did so many over the past two days.” Like that’s ever stopped him before.

Foreign policy types call the meetings “bilats” — or bilateral meetings — but with Trump, bilats have the feel of extended monologues.

In the military, they’d call this asymmetrical warfare. Trump says whatever he likes, and the other leaders cannot protest in kind lest they tick off the prickly leader of the free world.

And unlike the other heads of state, Trump is unencumbered by his past pronouncements.

Tuesday morning as Trump welcomed Stoltenberg, he went after Macron for making “a very, very nasty statement” about NATO. (Macron called NATO brain dead in an interview published last month in The Economist.) But as a candidate, Trump called NATO “obsolete.”

At his first NATO summit in 2017, while participating in a dedication ceremony for a memorial to 9/11 and NATO’s mutual defense pact, he berated NATO leaders for not paying their fair share. Diplomats would call his dressing down in Brussels inappropriate.

How dare Macron do as Trump did?

Then when the two presidents were in the same room, Trump was conciliatory. The American president said that Macron and he disagreed on NATO and trade — a “minor dispute.” But no worries, “I think we’ll probably be able to work it out.”

Which brings to mind the other problem with Trump’s rambling exchanges with reporters. The tough-taking president is great at making brash salvos, but then he takes them back.

Wednesday when asked about the Trudeau video, Trump responded, “Well, he’s two-faced. And with Trudeau, he’s a nice guy.”

So which is it? Naughty or nice? Trump’s answers are, as he would say, two-faced. Problem: If Trump doesn’t really mean what he says, why should others care what he says?

What is this, you may ask, a journalist who complains that Trump talks too much to the press?

No, the issue here is that Trump doesn’t speak carefully. He’ll say anything, then take it back. He puts quantity over quality. If Trump didn’t talk endlessly, methinks, he actually might speak with more precision. As it is, the longer Trump talks, the more he repeats and contradicts himself.

I’ve given up on fact checking everything Trump says because fact-checking would become the whole story.

On Tuesday, FactCheck.org compiled a list of Trump’s false claims that day. The list included Trump’s claim that captured Islamic State fighters “are mostly from Europe.” Wrong, the “overwhelming majority” are from Iraq and Syria. Trump inflated the amount of territory controlled by Islamic State under Obama. The U.S. trade deficit with the European Union has gone up under Trump, not down as he claimed.

Trump also said America “never used to win” World Trade Organization cases before he took office. Wrong, reports FactCheck.org. The U.S. has historically won most of the cases it has brought to the WTO against other nations.

Of course what Trump does is more important than what he says. For all his bluster, Trump has prodded NATO nations to spend more on their own defense. It’s a signal accomplishment, and it could have been the focus of many stories on the two-day NATO summit — if Trump had any message discipline.

Instead the big take-away is that Trump canceled a news conference because Trudeau impolitely said Trump talks too much, which everybody knows.

He talks so much that he steps on his own message, even as the whole world is watching and his presidency is at stake.