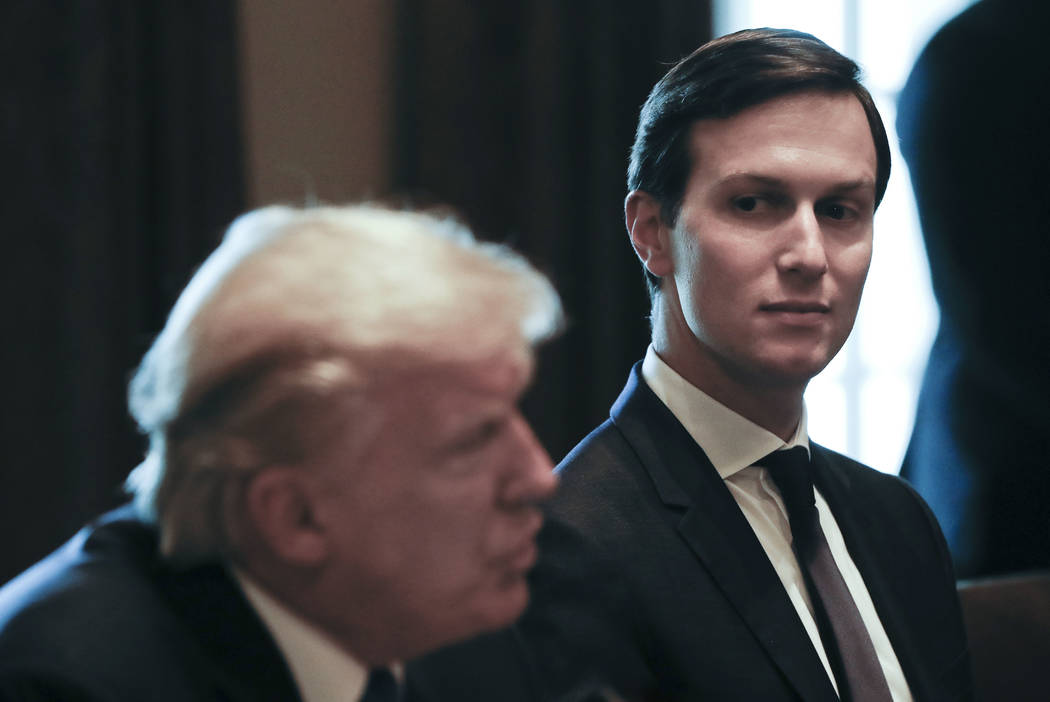 FILE - In this July 25, 2017 file photo, White House Senior Adviser and envoy, Jared Kushner, listens at right as President Donald Trump speaks during a meeting in the Cabinet Room of the White House in Washington. (AP Photo/Pablo Martinez Monsivais, File)

WASHINGTON — President Donald Trump wants to help federal inmates “who have served their time get a second chance.” That’s what he said in his 2018 State of the Union address.

“Like me, Jared understands because of dealing with the BOP (Bureau of Prisons) and his father,” observed Pat Nolan, director of the American Conservative Union Foundation’s Center for Criminal Justice Reform and a former California GOP state lawmaker who served 29 months in federal prison on a racketeering conviction.

Nolan has been at the forefront of a bipartisan movement to overhaul the federal criminal justice system spurred by the left’s aversion to big spending on prisons and the right’s support for smaller, less invasive government. The conservative side of the initiative calls itself “Right on Crime.”

He lauded Kushner for quickly learning “what’s important to do and what we can’t do.”

During President Barack Obama’s second term, congressional standouts like Sens. Chuck Grassley, R-Iowa, and Dick Durbin, D-Ill., worked together on legislation to reduce federal mandatory minimum sentences designed to put away drug kingpins for decades but too often used to impose stiff time on low-level offenders in the drug trade.

Obama was ready to sign game-changing legislation, and House Speaker Paul Ryan, R-Wis., was on board. All Congress had to do was pass something. But nothing happened as the 2016 election eclipsed lawmaking inside the Capitol.

Obama’s Attorney General Eric Holder did encourage federal prosecutors not to seek the harshest sentences for non-kingpins. That was progress.

Then the law-and-order Trump won the White House in November and chose Sen. Jeff Sessions, R-Ala., to be his attorney general. A former federal prosecutor, Sessions rescinded Holder’s instructions.

Big change in the federal system seemed dead, and would have been, if not for Kushner. He explained to the Las Vegas Review-Journal, “The administration wants to assist long-time prison reform advocates with their initiative to create a prison system that will rehabilitate citizens who have made mistakes, paid the price and are deserving of a second chance — which will ultimately reduce crime and save taxpayer dollars.”

In practical terms, Kushner has helped in two ways. First, his commitment tells Hill Republicans that Trump is not likely to reverse his support for prison reform.

Kushner also found a way to co-opt Sessions — by convincing inmate advocates to delay their push for sentencing reform in exchange for Sessions not standing in the way of their rehabilitation goals.

Voila. The Justice Department now “is working closely with the White House to develop legislative reforms that further the president’s goals for prison and re-entry improvements,” said spokesman Drew Hudson.

Nolan and others with “Right on Crime” see hope in the Prison Reform and Redemption Act, sponsored by Rep. Doug Collins, R-Ga., that would require prisons to assess inmates’ recidivism risk, encourage drug treatment and offer incentives for inmates to participate in recidivism reduction programs.

Collins said his bill would create “a federal prison-wide system for evaluating the risk of every individual prisoner for re-offending and then offering evidence-based resources — like mental health care, vocational skills, substance abuse treatment and faith-based programs — that make them less likely to re-offend when they are released.”

Sens. John Cornyn, R-Texas, and Sheldon Whitehouse, D-R.I., have teamed up on a similar bill that seeks to aid prisoner re-entry into society.

Offering programs to help inmates turn straight should be a popular idea. “Whatever one’s view is of the federal sentencing laws — whether you think they are too fair, too harsh or too lenient — there should be agreement that it is critical for the GOP to have programs for transitioning federal inmates back into society,” DOJ Inspector General Michael Horowitz wrote in a 2017 report.

Many criminal justice reformers don’t think the Collins bill goes far enough. Like Nolan, they want a bill that pares back federal mandatory minimum sentences that too often put away low and mid-level offenders away for decades, even life. Even under Trump, they won’t settle for inmate-centered reform only.

For example, Eric Sterling, who founded the Criminal Justice Policy Foundation to correct excesses in federal drug laws that he helped write as a House aide in the 1980s, thinks Kushner and Nolan have set the bar too low.

“A traditional Washington approach is to say, ‘Always take half a loaf rather than no loaf,’” said Sterling. In this case, “conceptually it doesn’t make sense to just try to fix problems with prisons when you’re not addressing the flows of people coming into prison.”

Sterling recalled how drug-war opponents pushed Congress to reduce a sentencing disparity that fell disproportionately on black offenders. The federal sentence for possessing five grams of crack cocaine was five years in prison, same as for possessing 500 grams of powder cocaine, a drug of choice for white offenders. It took years for Congress to pass a measure addressing the disparity with the Fair Sentencing Act of 2010, though it merely reduced the disparity.

But Derek Cohen of the Texas Public Policy Foundation sees the Collins bill as “a good first step.” He hopes reformers don’t let the perfect get in the way of the good.

Over the last decade, Cohen said, Texas officials concentrated on strengthening treatment and re-entry programs for offenders — and it worked. The number of state inmates declined.

Brooke Rollins, president of the Texas Public Policy Foundation, is leaving her perch in Austin to push for reforms nationwide. And she’s going to work for Kushner.