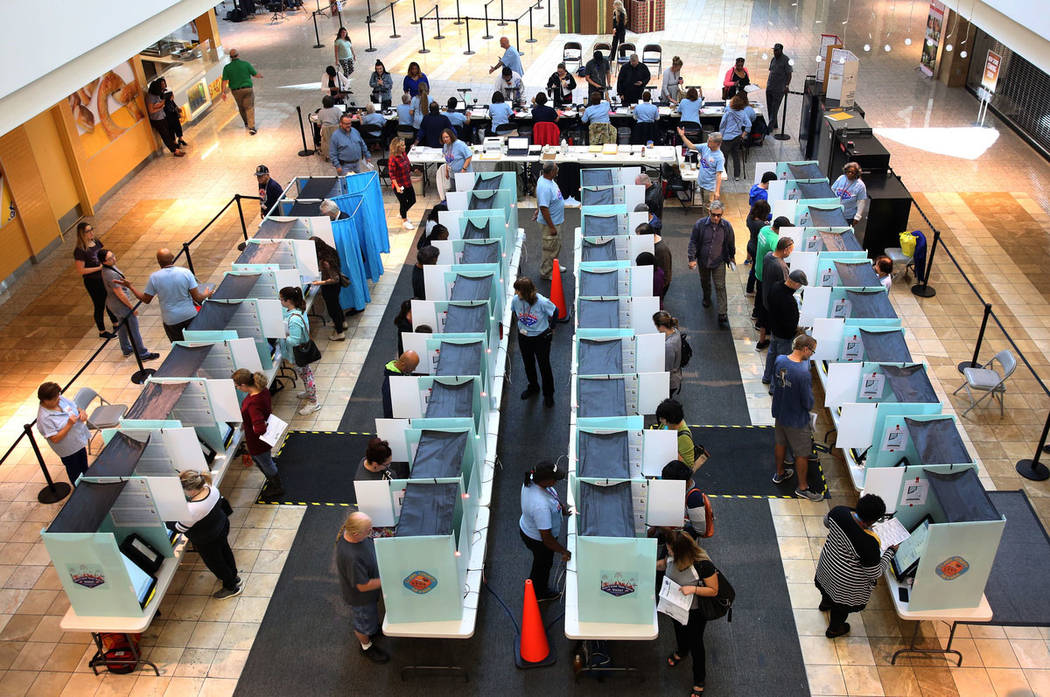 Voters cast their ballots as others sign in at a polling station at Galleria Mall on Tuesday, Nov. 6, 2018, in Henderson. (Bizuayehu Tesfaye/Las Vegas Review-Journal) @bizutesfaye

It may soon become much harder to recall a public official from office in Nevada.

And if it does, we have the meritless, ill-considered and failed recalls of a trio of Nevada state senators to thank.

To be clear: There was absolutely no legitimate reason to try to recall these women. The motive was entirely political, to capture three Senate districts for the GOP in advance of the 2018 elections. (The best case could be made against Farley, who’d switched her voter registration from Republican to nonpartisan and caucused with the Democrats in the 2017 Legislature. But Farley had already decided she would not seek re-election in 2018.)

It was a foolish and short-sighted abuse of the recall process, which is designed as a safety check for voters to remove a misbehaving elected official who otherwise refuses to resign.

The Farley recall fizzled, but the Woodhouse and Cannizzaro petitions were filed. After a judge ordered the verification of all signatures, officials determined both petitions had failed to collect enough valid signatures to trigger recall elections.

Recall proponents didn’t stop there: They argued the issue all the way to the state Supreme Court, with increasingly desperate claims. Justices unanimously rejected the appeal.

Some might argue the story should end there: The system worked as it should, an attack on democracy was turned away by the state constitution and the legal system.

But Democrats are using the controvery to toughen Nevada’s laws in ways that would make it much harder for voters to oust an elected official. The proposed law was obviously inspired by the Woodhouse-Cannizzaro misadventure.

Senate Bill 450 passed with a bipartisan 16-5 majority in the upper house and awaits a hearing in the Assembly’s Legislative Operations and Elections Committee. Among other things, it would require county clerks to verify every single signature on a recall petition, rather than using a statistical sample. (An initial sampling of the Woodhouse and Cannizzaro petitions showed they were valid.)

The bill would require recall organizers to pay for counting signatures, unless the group submitted an affidavit saying that payment would be a financial burden. If paid signature gatherers were used to circulate recall petitions, the organizers would not be able to seek a waiver.

If a recall election were held, contributions would be limited to $5,000 max, and donations could not be used in any other race. Ethics rules that prohibit incumbent lawmakers from raising money during a legislative session would be lifted in case of a recall.

Fundraising reports would be required while petitions were being circulated, allowing the public (and the target of the recall) to see who’s bankrolling the effort.

The bill would also allow people who signed the petition, but changed their minds, to sign “strike requests” to remove their signature, not only during the petition-circulation period, but even after petitions are submitted. And recall organizers would have to submit all the signatures they’d collected by the halfway mark of the 90-day circulation period, which would alert recall targets to the identities of signers (whom they could then ask to sign a “strike request”).

Finally, it would make lying about the intent of the petition or affixing a false signature a Category E felony instead of a misdemeanor. It was alleged during the Woodhouse-Cannizzaro affair that would-be signers were misled about the nature of the petition.

These reforms would certainly stop some of the abuses that characterized the recent recalls. But they undoubtedly would make it harder to recall officials when there is legitimate misconduct in office.

Ordinarily, a person could chalk this bill up to incumbents protecting themselves from obstreperous voters. But this time, a clear trail of abuses inspired the changes. When looking to place blame, don’t look at craven Carson City politicians, look at the people who cynically tried to use recalls to change the partisan makeup of the state Senate.

Oh, by the way, Cannizzaro is currently the Senate majority leader. Woodhouse chairs the powerful Senate Finance Committee. And Farley is a happy foster parent. The would-be recallers? They’re all private citizens.

You know what they say: Living well is the best revenge.