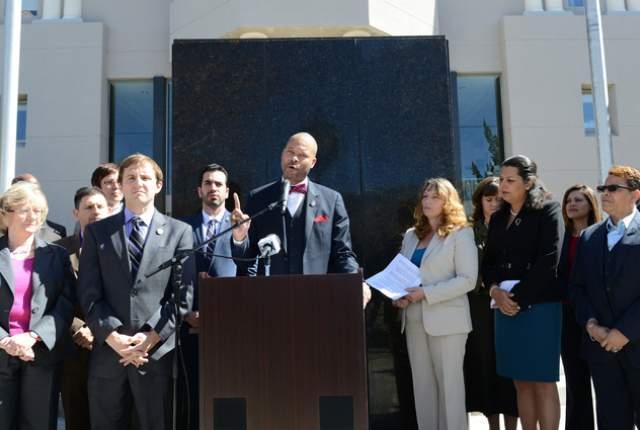 State Senate Minority Leader Aaron Ford, D-Las Vegas, will not run for Congressional District 3, instead opting to run for re-election and trying to wrest control of the upper house from majority Republicans.

The announcement ends speculation about an ongoing matchup: Senate Majority Leader Michael Roberson, R-Henderson, with whom Ford tussled over issues during the recently concluded four-month legislative session in Carson City, today announced via Twitter he was seeking the seat.

In a statement, Ford acknowledged being courted to run for Congress for the seat that Rep. Joe Heck is leaving to run for U.S. Senate.

“I would like to thank the many people who encouraged me to run for the U.S. House of Representatives,” Ford said in a statement. “While I deeply appreciate the support, I can best serve my friends, neighbors, and fellow Nevadans by running for re-election in Senate District 11. Raising four boys, I know how important it is that Nevada’s state senators focus on the kitchen-table economic issues that families all across the state deal with every day.

“Unfortunately, Republican leadership killed important bills that would have guaranteed a parent time off work to care for a sick child, helped our graduates refinance their student loans, and ensured that women earned equal pay for equal work. I’m committed to helping my party retake the state Senate majority in 2016 so that we can renew our focus on the issues that will help grow Nevada’s middle class.”

Democratic leaders have also reached out to former Secretary of State Ross Miller as a potential CD-3 candidate. Miller is now an attorney in private practice, but is still believed to be planning a run for governor when incumbent Brian Sandoval’s second term is up in 2018.

UPDATE: Republicans used Ford’s exit from the race as an excuse to gloat today. In an e-mail to reporters, a spokesman for the National Republican Congressional Committee said “national Democrats have embarrassingly lost one of their top recruits.”

“Democrats have been disappointed by crushing defeats in the 3rd District for the last two cycles, and it looks like that’s all they have to look forward to in 2016 as well,” the email adds.

“Democrats just can’t get their act together in Nevada’s 3rd District, and Aaron’s Ford’s refusal to run only solidifies their ineptitude. After two consecutive crushing defeats in CD3, it’s clear Nevada Democrats are hesitant to be the next Erin Bilbray,” said NRCC spokesman Zach Hunter.

Ouch, baby! On two fronts: One, Bilbray being used as a metaphor for failure, and two, comparing anyone to her worst-ever performance in that district in 2014.