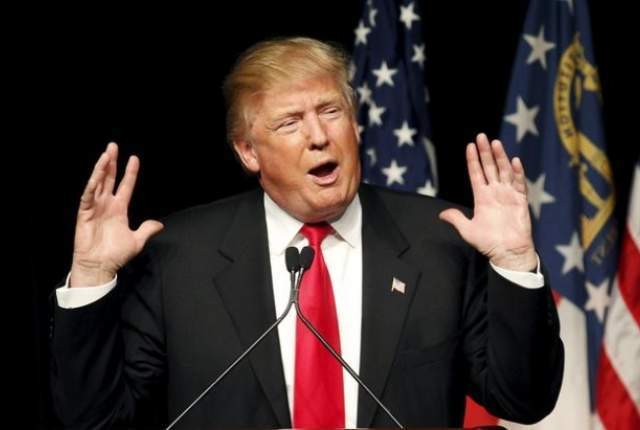 Poor Paul Ryan. The House speaker dithered like Hamlet for a month before he endorsed Donald Trump for president, immediately before Trump went on his latest race-tinged rampage.

It’s like those snake-handling Christians getting bitten by one of their venomous charges as they try to demonstrate their faith in God; the only person who’s really surprised is the guy holding the snake.

But really, now that Trump has clinched the Republican nomination, and now that efforts to find a third-party contender within the GOP are pretty much dead (David French, we hardly knew ye!), it’s time that Republicans find a way to endorse Trump without necessarily embracing Trumpism.

Ever helpful, here’s the SlashPolitics Republicans’ Guide to Endorsing Trump. Follow this simple script, Republicans, and you won’t face any more uncomfortable questions on the campaign trail!

“First off, yes, I endorse Donald Trump for president. He’s the nominee of my party, after all, and changing parties is a real pain. I mean, I assume there’s forms you have to fill out and whatnot. Plus, what am I supposed to do without all the money that comes to me as a party member? And do you know how long it took me to gerrymander this district into one I could never lose? You see my dilemma.

“But I want to make it clear that I do not support everything Trump says. For example, I don’t believe that most immigrants from Mexico are rapists or drug dealers. Put me down squarely in the ‘some of them are good people’ camp, OK? And I don’t think that just because a judge has Mexican heritage that he can’t be fair in judging a case that involves Trump, no matter how antagonistic Trump’s rhetoric becomes.

“Also, I want to make it clear I don’t support banning anybody from coming to America based on their religion. I mean, how are you even going to know what a person’s religion is, anyway? Besides, wouldn’t a Muslim terrorist just lie? But we’ve got to welcome everybody to America, like it says on the Statute of Liberty, all right?

“Oh, while we’re on the subject, I want to say for the record that I do not believe that women are dogs, fat pigs, slobs, or disgusting animals. That’s wrong, and I condemn each and every one of those horrible remarks. For God’s sake, I’m a husband and father! And that reminds me: I don’t think anybody should be talking about the size of their privates during a debate, and I hope we’ve put that stage of the campaign to rest. That’s something a candidate for the nomination of a major party should never do.

“Also, I’m one of those people who thinks that we need to calm down the rhetoric in Washington, D.C. and to stop being so mean to each other. So I’m not really down with giving people offensive nicknames, calling them names on Twitter or whatnot. In fact, I think things were better before we were all on Twitter all the damn time yelling at each other from minute to minute. So the nominee and I definitely part ways on that.

“Now, just a couple more things. … Let me see here, oh, yes, I am firmly in favor of staying in NATO under the current arrangement. NATO has been around a long time, and it’s proven to be a very useful hedge against war in Europe, and I’ll be damned if I’m going to end 67 years of cooperation just because our party’s nominee thinks it’s a bad deal.

“Oh, and while we’re on foreign policy, I’m also going to have to part ways with the nominee on nuclear weapons. I don’t think Japan, South Korea or Saudi Arabia should get nukes. Especially Saudi Arabia. I can’t say why, but trust me. I’ve got 28 pages of reasons for my position on that, all right? So I’m not down with that at all.

“Also, and this is just my view here, but I don’t think being praised by Vladmir Putin is a good thing, you know? I mean, he’s a pretty evil dude, and if he likes you, well, that can’t be a good thing. The Russians never liked Ronald Reagan, did they? Hell no, they didn’t.

“Also, yes, I do think it’s a good idea for somebody who is going to become commander-in-chief to know what the ‘nuclear triad’ is. But look, there’s Wikipedia, OK? I mean, that will still exist after the election. So chill on that.

“OK, is that it? Oh, no, wait a second, I’m also against identifying people by race at my rallies. Like ‘my African-American over here’ or words to that effect. Look, to me, a potential voter is a potential voter, and I think we should treat them all equally and with respect. We can’t let the Democrats win all the minority communities in America!

“Oh, I almost forgot: I am definitely anti-fraud. Fraud is a bad thing, and I am against it. So, if you’re, say, running classes to teach people how to get rich in real estate, and it’s basically just a scam, well, that’s not something of which I would ever approve, all right? Not that that happened, all right? I’m told that most people liked their experience at Trump University.

“And, yes, before you ask, I did see that story in USA Today last week about the 3,500 lawsuits that our nominee has either filed or been named in. OK, as a Republican, I think now might be a good time to remind people that we are the party of tort reform, and the ones who stand against frivolous and vexatious litigation. I know Mr. Trump has talked about making it easier to sue newspapers, too, but I’m very much against that, even though the press mistreats us all the time.

“All right, I think that’s it. What’s that? The wall? I presume you’re not talking about ‘Game of Thrones,’ right? Of course I’m against the wall — the Trump wall, that is. The one in ‘Game of Thrones’ seems like it’s really working so far, since the white walkers haven’t been able to get through in, like, six seasons. But building a wall on our southern border? Billions of dollars wasted as soon as somebody gets the bright idea to dig a tunnel. Oh, wait, they already have. So, no, no wall, no moat, nothing like that.

“And as far as deporting everybody who’s here illegally? Look, I’m a Republican, OK? And while I’m naturally pro-cop, I’m not necessarily down with expanding the federal workforce by thousands of new ICE officers, all of whom are going to become members of a union that’s going to donate to my Democratic opponents, all right? So that’s a non-starter for me.

“Oh, and finally, of course I think a presidential nominee should release his tax returns. It’s become tradition by now, right? Who cares if there’s an audit? That’s got nothing to do with full disclosure. So, yeah, we disagree on that.

See? It’s simple. So, Republicans, print this simple script out and carry it with you, because there’s a really good chance this question will definitely come up between now and Election Day.