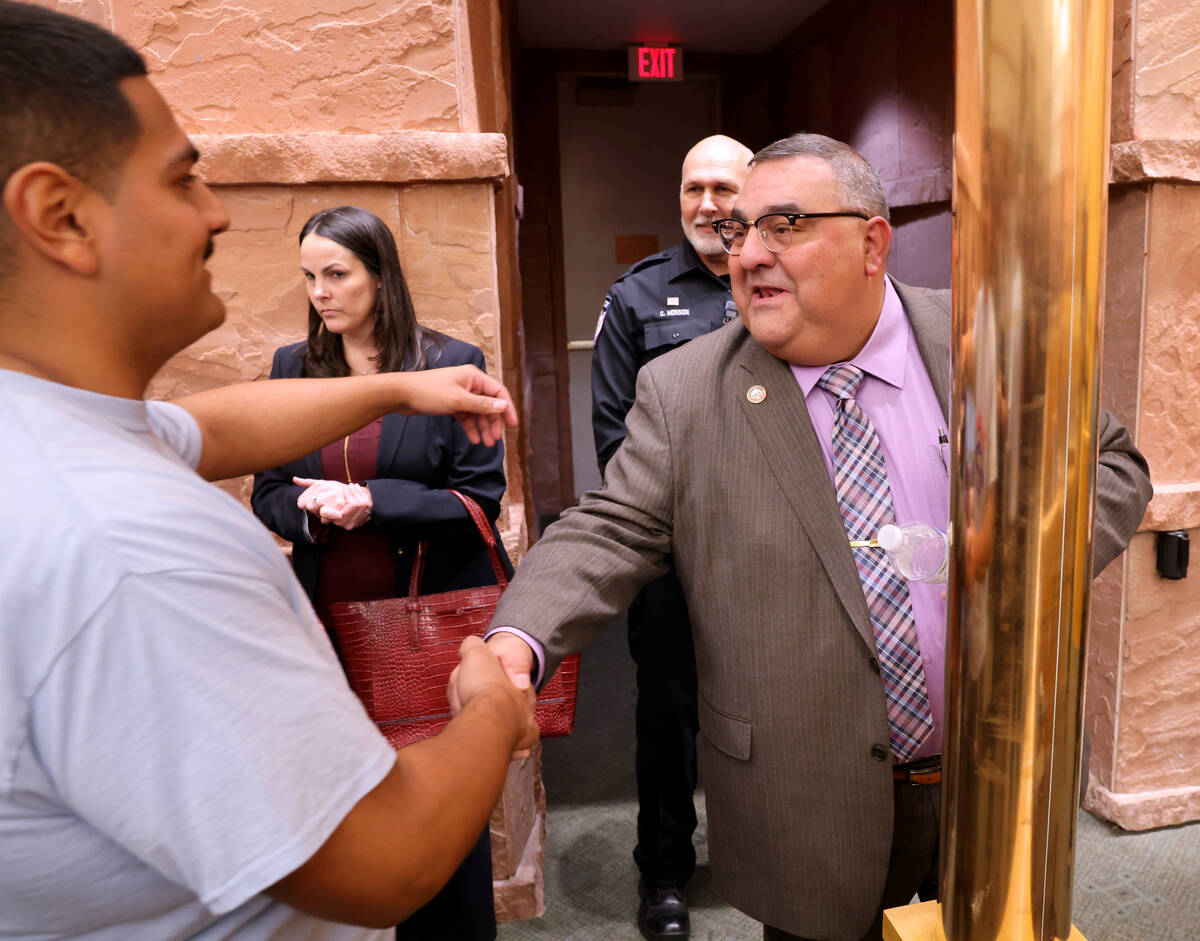 Clark County Registrar of Voters Joe Gloria gets greets a supporter after a Clark County Commission meeting where the commissioners voted unanimously to approve the results of the election at the Clark County Government Center in Las Vegas Friday, Nov. 18, 2022. (K.M. Cannon/Las Vegas Review-Journal) @KMCannonPhoto

There came a moment at the canvass of the votes of the 2022 election on Tuesday when the chief justice of the Nevada Supreme Court spoke for nearly everyone in the state.

“Madam Secretary,” said Ron Parraguirre, addressing outgoing Secretary of State Barbara Cegavske, “we thank you for your service to the state over the years, and your dedication to the office and your remarkable staff.”

The voters may not realize it, but they have Cegavske’s character, integrity and iron courage to thank for keeping the 2022 election on track. And not just that election, but elections in the past, and in the future, too.

Cegavske — a Republican former state lawmaker known for her conservative views — never backed away from a fight when she thought she was in the right. And she never gave in to pressure, whether partisan or personal, when it came to standing up for Nevada’s elections.

When Donald Trump claimed he’d really won the popular vote in 2016 if you subtracted the “illegal” votes, Cegaske dismissed that as the lie it was. When he claimed he’d won the 2020 election over Joe Biden, Cegavske said no.

When members of the Nevada Republican Party, either misguidedly or misanthropically, dropped off boxes of alleged “evidence” of election fraud, Cegavske assigned her staff to painstakingly investigate. That analysis showed no widespread fraud had occurred.

When former Attorney General Adam Laxalt claimed voter fraud as Trump’s front man in 2020, Cegavske kept her head down and stuck to the facts.

When the Nevada Republican Party censured her for failing to agree with false claims of voter fraud, Cegavske did not bend. The fact is, she is more a Republican than most of her critics will ever dream of being, and that’s her reward.

And not just Cegavske, but the dedicated employees of the secretary of state’s elections division also deserve our thanks. They’ve been reviled, threatened and made to fear for their lives. They’ve endured absurdity, asininity and approbation, simply to do the jobs they’ve sworn to carry out.

We owe them all a great debt, because without such people, democracy collapses. This is precisely why those who peddle elections falsehoods seek to diminish and even replace them.

There’s more thanks to be given, too. Here in Clark County, Registrar of Voters Joe Gloria demonstrated the patience of Job as people fecklessly accused officials of manipulating the election.

Gloria patiently answered questions and opened his vote-counting center to observers even more than in the past, while conspiracy theories and false charges swirled. He, and his dedicated and patient staff — to say nothing of the saints who volunteer to help voters cast their ballots in every election — did their jobs with humility, integrity and grace, despite the clamor.

Think of what would have happened had Cegavske or Gloria given in to the pressures or surrendered to the lies. The damage to the state would have been irreparable.

The only sad thing about the end of the 2022 election is that it will be Cegavske and Gloria’s last. She is term-limited, and he is retiring after a long career in election administration.

The voters — and here we must offer another round of thanks — did the right thing this month in the secretary of state race, rejecting the election-denying former Assemblyman Jim Marchant in favor of attorney Cisco Aguilar. He pledges to continue Cegavske’s record of nonpartisan integrity in election administration, which is an example for every secretary of state in America to emulate.

And while it will be difficult to replace someone with Gloria’s experience and record, we can do no less if we intend to keep running elections that are clean, fair, open and honest.

In the meantime, Nevada owes Barbara Cegavske and Joe Gloria — and all the men and women who worked for them and for us to ensure that our democratic republic still functions — a debt we can scarcely repay. Elections don’t just happen, democracy doesn’t just run as a perpetual political motion machine. It takes care, protection and hard work.

And it takes warriors to stand up to those who would lie in order to rob us of our birthright.

So, Madam Secretary, Registrar Gloria, and to the many hundreds of people who helped with this work, thank you for your service to our state over the years. We should not ever forget it.