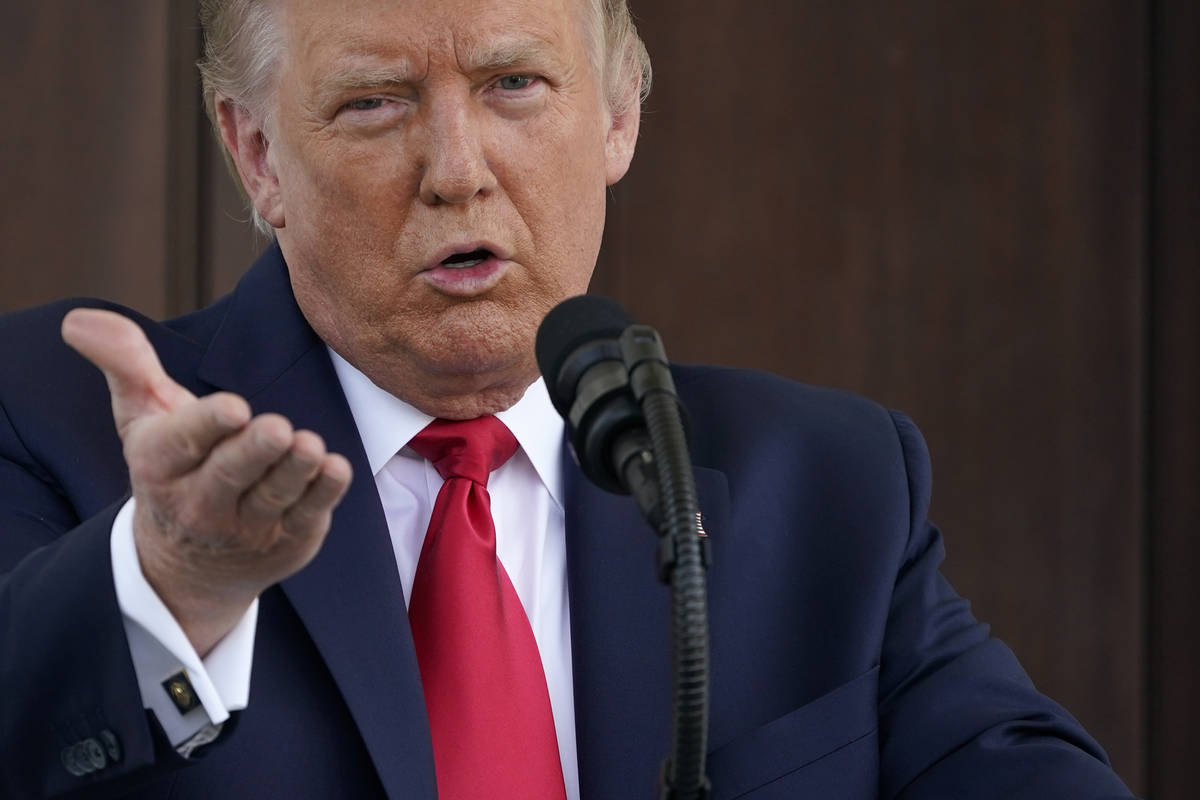 President Donald Trump speaks during a news conference on the North Portico of the White House, Monday, Sept. 7, 2020, in Washington. (AP Photo/Patrick Semansky)

Trump is being sued by former Elle columnist E. Jean Carroll, who alleges that in the mid-1990s he sexually assaulted her in a department store fitting room. After she made the accusation public last year, Trump denied the charge, adding “she’s not my type.”

Leave aside the obvious question — sexual assault might be possible if a woman was the president’s type? — Trump’s denial gave rise to a lawsuit in which Carroll says her reputation was damaged because Trump called her a liar.

According to CNN, Barr acknowledged that the White House asked the Justice Department to take over the case from Trump’s private legal team. Barr’s reasoning for agreeing to the request, critics say, is as thin as sliced prosciutto: Although the incident in question took place more than 20 years ago, Trump’s denial came after he was elected president and, as a result, he was acting in his official capacity and thus is entitled to a government-financed defense.

But America is not a monarchy, and while we do embrace the legal doctrine of sovereign immunity in certain circumstances, here the president can do wrong, legally speaking. Because Trump was clearly discussing a private matter that took place long before he was elected to office, there is no nexus to his public duties.

One of the worst things about Barr’s decision to use government lawyers to defend what is essentially a private civil action against the president is that it should be unnecessary. And had the U.S. Supreme Court not seriously erred in 1997 in a very similar case, it may not be an issue now.

In 1994, former Arkansas state employee Paula Jones sued then-President Bill Clinton, alleging that he had sexually harassed her in a Little Rock hotel room in 1991. The case wound its way through federal courts, until the 8th U.S. Circuit Court of Appeals ruled that the civil action could proceed, rejecting Clinton’s contention that it should be stayed until after his term of office.

The U.S. Supreme Court accepted the appeal and unanimously ruled (with Justice Stephen Breyer writing a separate, concurring opinion) that a civil lawsuit could proceed against the president in federal court for acts that took place before his election.

The court was wrong. Civil actions filed against presidents for things that happened before they took office should be stayed until their term is up.

Before the objection is raised — but this is America, and no one is above the law! — consider that no one is saying that, including Clinton in the Jones case. It was not a question of whether Jones (or, in the current case, Carroll) could pursue a claim in court but rather a question of when.

Although Clinton’s attorneys argued on the basis of separation of powers to stay the case until he left office — the judicial branch would have too much power over the executive in overseeing civil litigation against a sitting president — the real argument should have been a simple balancing of interests. Should a president, the most powerful man in the free world, be subjected to the distraction of civil litigation during a period when he’s discharging the duties of the most powerful office in the land?

As the late Vincent Bugliosi argued in his book “No Island of Sanity,” which examined the case in detail, “Of course the public interest outweighs the private interest. It almost always does. … To hold otherwise would be to hold that the rights of an individual in a free and democratic society are more important than the conflicting rights of millions of individuals, an obvious absurdity.”

An absurdity that eluded the court (conservatives and liberals alike) in its 1997 decision.

As a result of Clinton v. Jones, and similar rulings, we are now once again faced with a case that shouldn’t be, now with Justice Department lawyers dragooned into defending a president’s private, civil action. Had the court simply held that civil litigants must wait until a president’s term is over — without prejudicing their rights in any way — this may not be happening now.

Some partisans may argue that, while Clinton was (mostly) a notorious workaholic, Trump is said to have a far more lax work ethic and perhaps more time on his hands. But that’s an irrelevancy: Either the president should be temporarily immune from civil (not criminal) litigation or not, and what should have been good enough for a Democrat in 1997 should also be good enough for a Republican in 2020.

Elections have consequences, they say, and so, too, do court rulings.