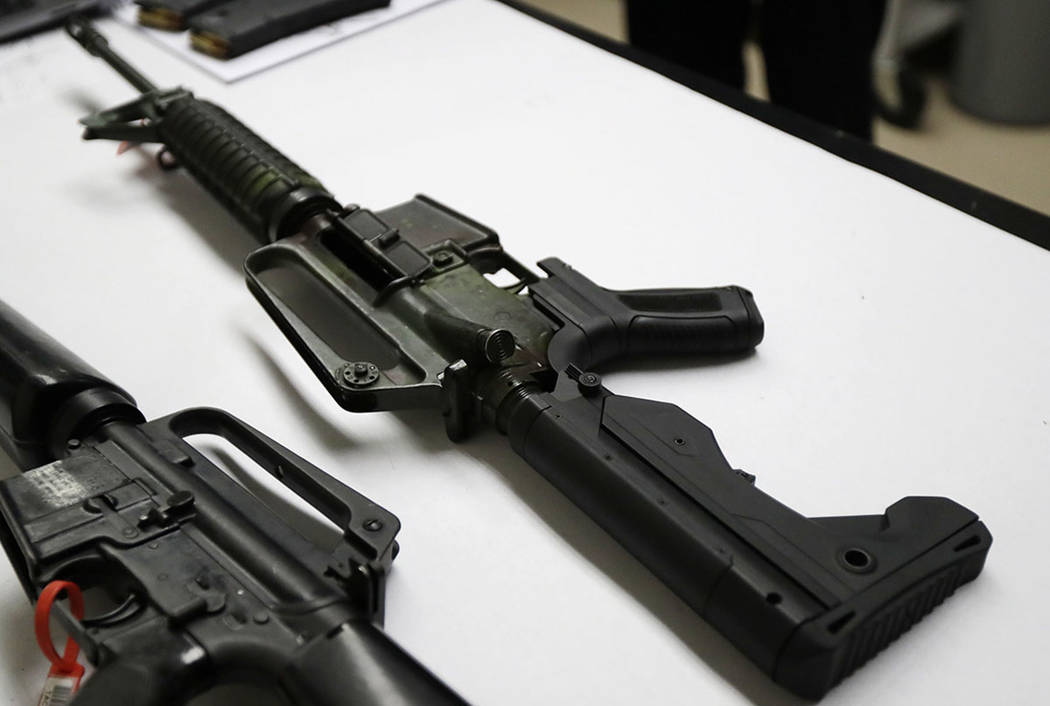 A semi-automatic rifle, at right, that has been fitted with a bump stock device sits on a table at the Washington State Patrol crime laboratory in Seattle. (AP Photo/Ted S. Warren)

New gun laws from Carson City are going to make life harder for the wrong people.

Legislative Democrats have been aggressively pushing gun control. On Monday, the Assembly and Senate Judiciary committees held a joint hearing on Assembly Bill 291. It would ban bump stocks and allow local governments to pass additional restrictions on firearms. This comes after Democrats rushed through a bill expanding background checks to private party sales during the second week of the session.

The language of AB291 is so broad that it would ban common firearm modifications, such as trigger pull adjustments, and even ban polishing certain parts of weapons. The bill’s sponsor, Assemblywoman Sandra Jauregui, D-Las Vegas, said during the hearing that she’d be willing to limit the ban solely to bump stocks. Assuming she makes those changes, that’s a good thing.

Some local government officials are eager to impose additional restrictions on firearm ownership, too.

“Without the ability to pass stronger laws to keep guns out of the hands of those who should not have them, all of our counties are vulnerable to further acts of gun violence,” former Clark County Commissioner Chris Giunchigliani said.

Underlying this belief are two assumptions. First, that guns and gun accessories are inherently dangerous. Second, that government can pass laws to reduce the access criminals have to firearms.

There are problems with both of these presumptions. A gun can kill someone, but so can a car, knife or pillow. It’s not the object itself that commits violence. It’s the person using it.

On Oct. 5, 2017, a man attempted to kidnap a young boy in Las Vegas. Justin Pearson, legally carrying a Heckler &Koch VP9 pistol, used the threat of his weapon to break up the kidnapping.

In one situation, a person using a firearm took innocent life. In the other, he helped save a life. The variable was the person — not the presence of a firearm.

If AB291 had been in effect, Clark County could have passed a law preventing Pearson from carrying his weapon. But this is the limitation of passing laws. They affect only the law-abiding. It was illegal for the Oct. 1 killer to murder. He did it anyway. Kidnapping is illegal. The man Pearson stopped tried it anyway. The only one the law would have stopped is Pearson — the person who used his firearm for good.

With this in mind, even the bump stock ban looks like little more than window dressing. You can simulate the action of a bump stock with a rubber band or stick.

If passing a law were enough to keep people safe, there’d be no reason to restrict guns. It’s precisely because criminals don’t follow the law that legislators shouldn’t restrict the ability of law-abiding citizens to defend themselves.