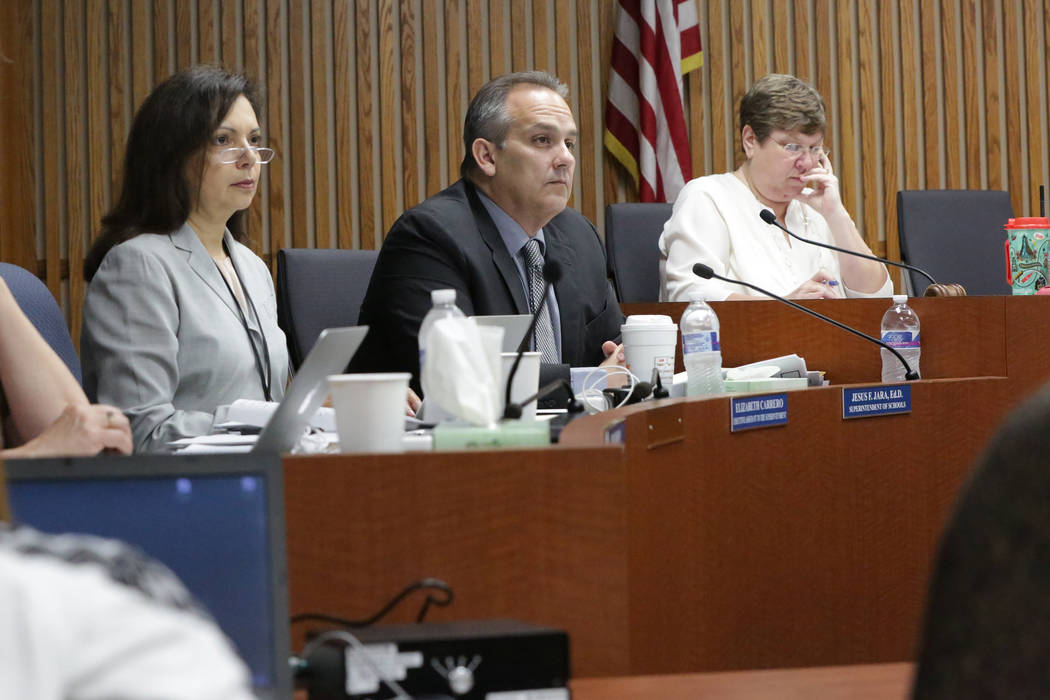 Clark County School District Superintendent, Jesus Jara, center, listens to a presentation to the board with Elizabeth Carrero, secretary to the superintendent, left, and Deanna L. Wright, trustee board president, during a meeting of the school board on Wednesday, July 11, 2018. (Michael Quine/Las Vegas Review-Journal) @Vegas88s 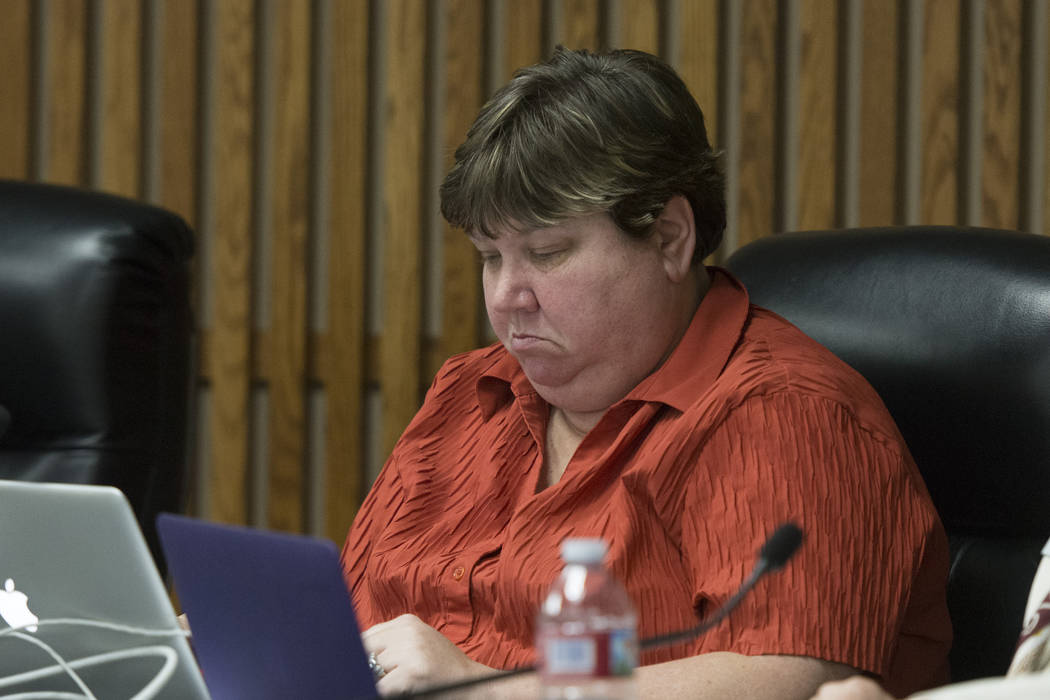 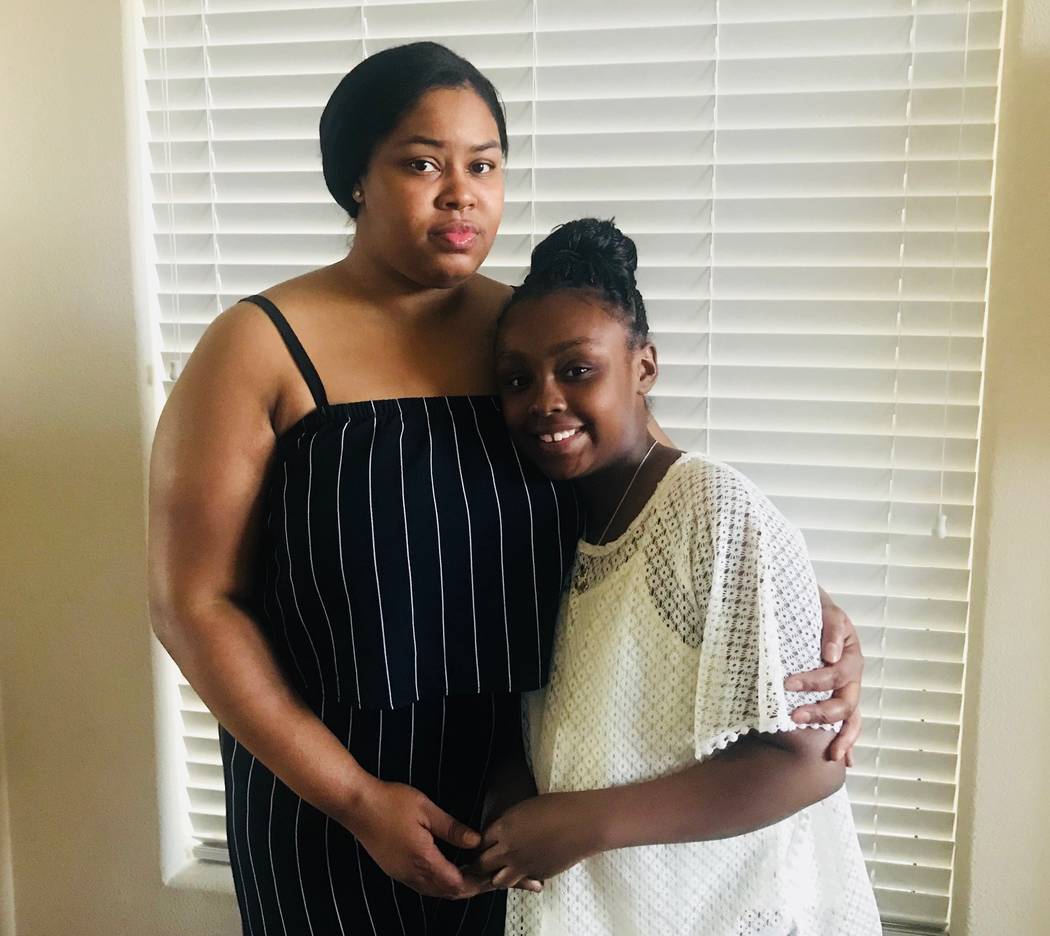 Jessica McCary, left, and her daughter, Ra'Niah Sanders, on May 14, 2018. Ra'Niah says that her teacher, Jason Wright, the husband of Trustee president Deanna Wright, threw and hit her with a desk. 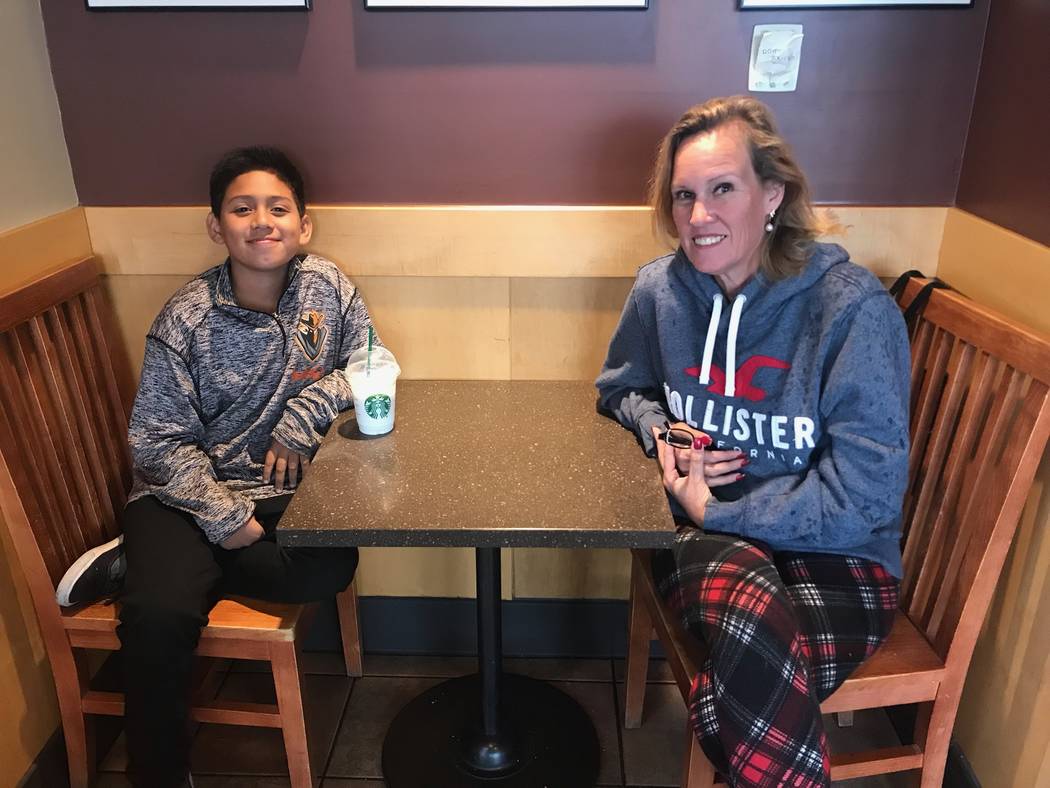 Jayden Zelaya-Ramos, 10, sits with his grandmother and legal guardian on May 1, 2018. Jayden had just finished describing how his fifth grade teacher Jason Wright, the husband of CCSD Board president Deanna Wright, kicked and yanked him at George E. Harris Elementary School during an incident on March 7, 2018. Victor Joecks Las Vegas Review-Journal @victorjoecks 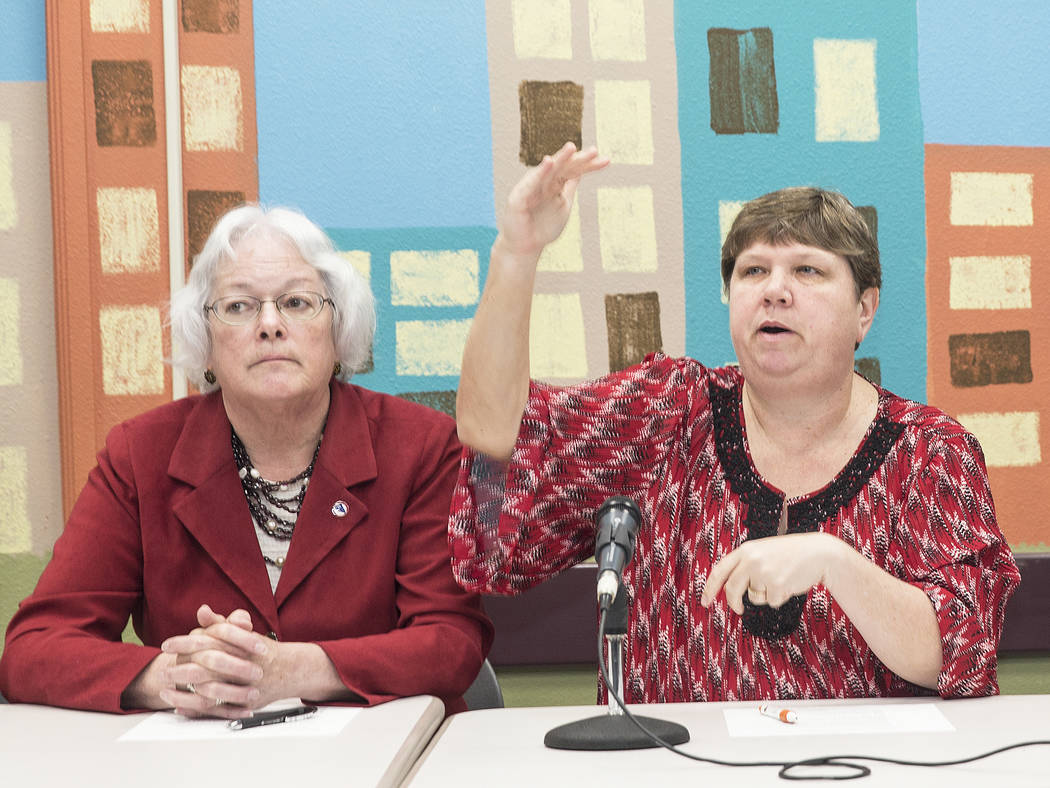 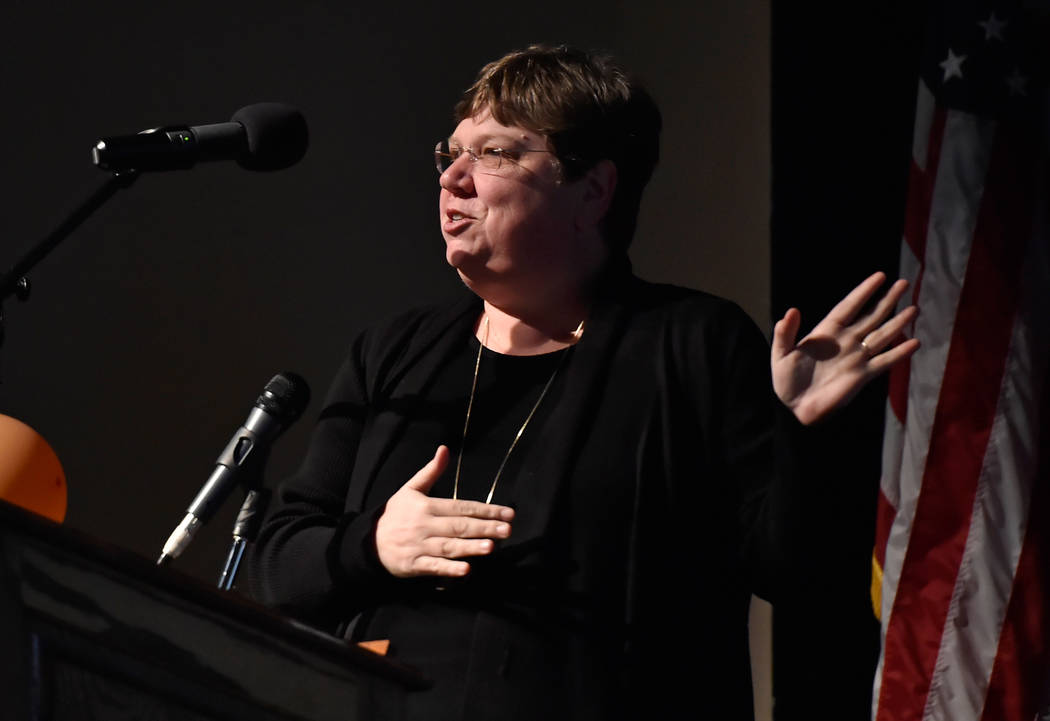 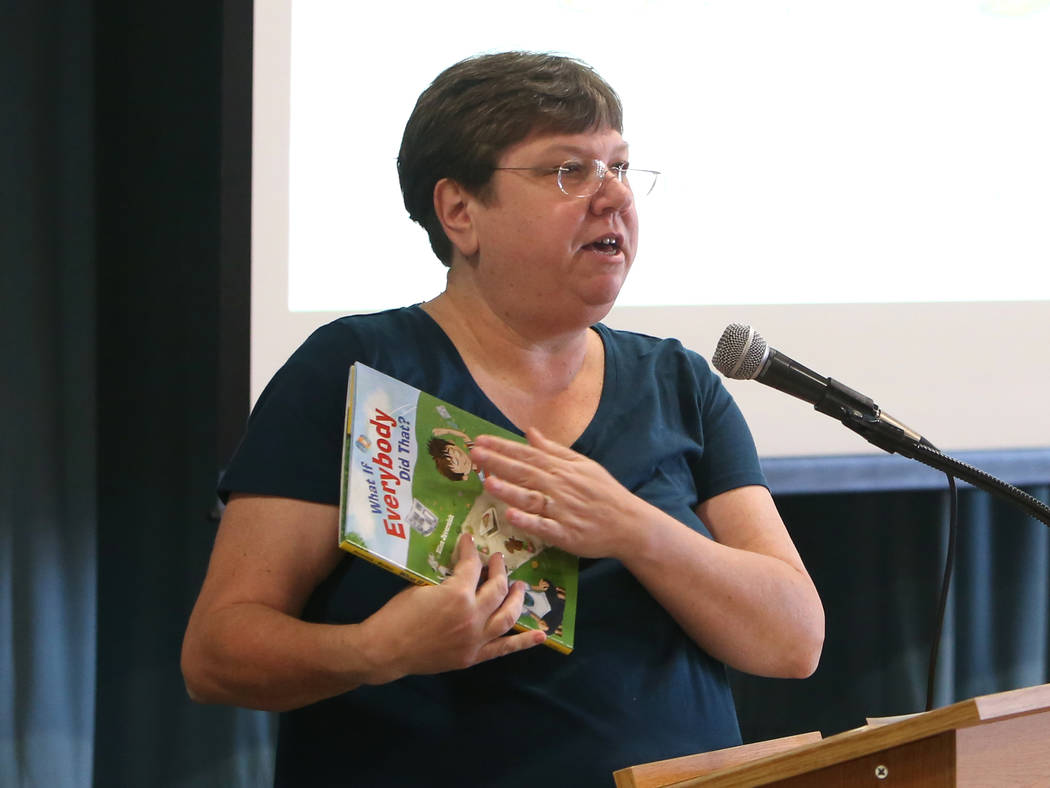 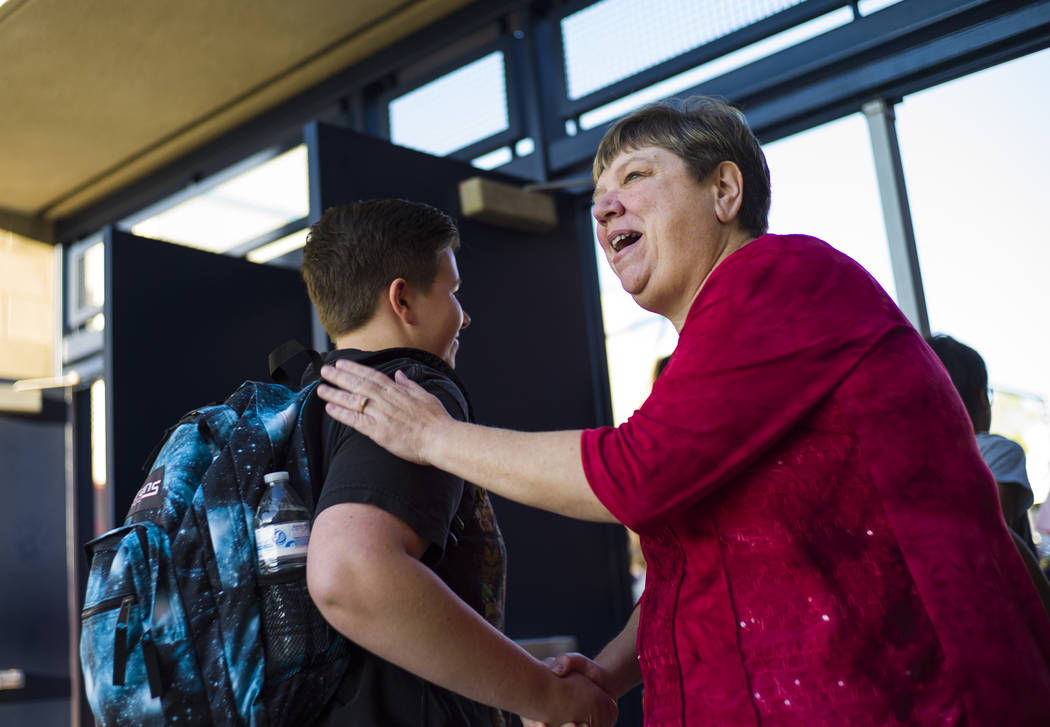 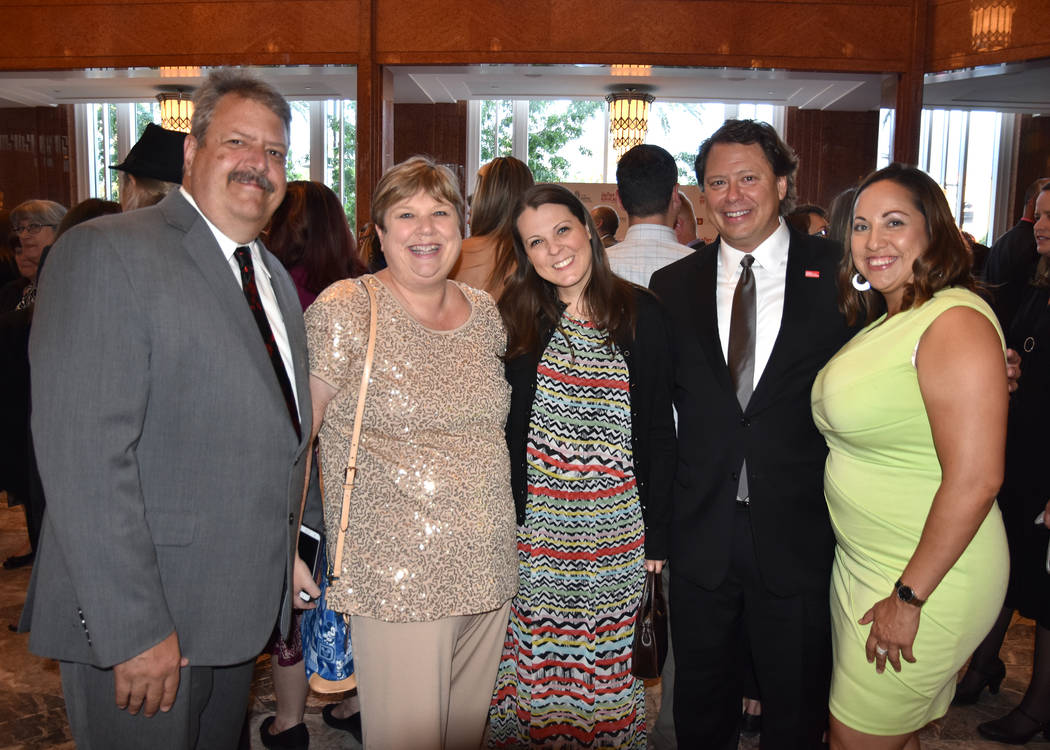 Jason Wright, left, and his wife, CCSD Board president Deanna Wright, second from left, at a function with former Superintendent Pat Skorkowsky, second from right. (Flickr)

The Clark County School District sent Deanna Wright to an anti-bullying conference in Orlando. She went to Walt Disney World instead of attending the end of the conference.

Wright is the president of the School Board. Last year, taxpayers paid for her trip to the 2017 National Conference on Bullying. The conference opened on March 1 and ended at 11 a.m. on March 3.

On March 3, at 9:53 a.m. — while the conference was ongoing — she took an Uber from her hotel to a Disney World parking lot. Late that evening, she took another Uber from Disney World back to her hotel. That’s according to travel documents obtained by a public records request.

If you’re using taxpayer money to go to a conference, you should be at the conference, not taking off to an amusement park.

Wright could have returned to Vegas the day the conference ended. Southwest had a flight from Orlando to Las Vegas that departed at 4:25 p.m. on March 3. Instead, she flew out on the afternoon of March 4. Wright’s excursion meant taxpayers paid for an extra night in her hotel, costing $169. Leaving a day late also allowed Wright to collect an extra $59 of per diem.

Why did district employees allow this, or is overlooking waste for district bigwigs considered normal?

Other records also make Wright’s trip look like a junket. Wright flew out on Feb. 27. There was a single pre-conference session on Feb. 28 at 2 p.m. Through a district spokesperson, Wright said she wanted to attend that session. But even if that’s so, Southwest had a Vegas-to-Orlando flight that arrived at 12:30 p.m on Feb. 28. The airport is 20 minutes from the hotel. Flying in early gave Wright another day of taxpayer-funded relaxation.

During her trip, Wright had nine Uber charges on her district credit card. She had the district reimburse four of the trips, because they “were transportation costs used to purchase food.” That makes it sound as if she had to drive to get food. Not hardly. The hotel had food. Wright ordered room service twice. The hotel also backs into a mall that had many dining options.

The public should be able to see where Wright went, but the district didn’t require her to submit receipts for all her expenses. Instead, it allowed her to turn in a memo listing the cost and the business name “in lieu of actual receipts.” For an organization with a multibillion-dollar annual budget, that’s asking for waste.

Wright spent $98.21 on “Renaissance Hotel F&B” on March 2. Presumably, that’s food and beverages, but the conference was held at The Florida Hotel. A Google search turns up two Renaissance Hotels in Orlando. One is by the airport. The other is at Sea World. Neither is next door to the hotel that hosted the conference. Where was she and when?

Details like that make you wonder if Wright left the conference on other days. Wright should put out her Uber receipts, and any other district employees who attended the gathering should reveal how much of the conference she skipped.

Asked in person to discuss her travel, Wright refused. She later sent an email claiming she “actively participated” in the conference, but acknowledged leaving early without saying why.

“When I travel for the school district, I’m very careful to maximize taxpayer dollars by bringing home relevant research and ideas,” emailed Wright. She didn’t respond to written follow-up questions or return a call.

This week, the School Board, including Wright, met to strategize about how to ask taxpayers for more money. That’d be a more worthy conversation if they weren’t wasting the money they already have.