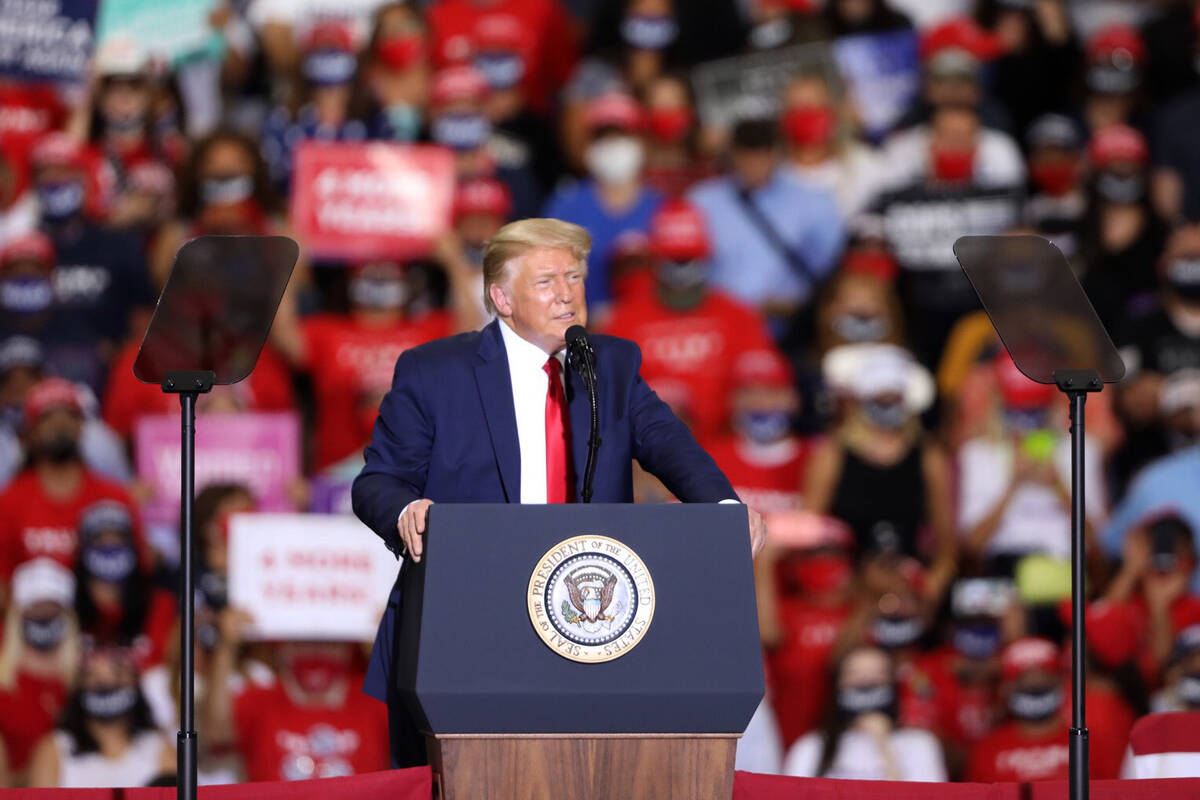 Donald Trump’s visit to Las Vegas on Friday is a good time to check in on his presidential chances, which are falling fast.

Trump is in town for an event at Treasure Island with Adam Laxalt and Joe Lombardo. Trump endorsed both men in their primaries. Unlike some of Trump’s other selections, both will be strong general election candidates.

The same can’t be said for Trump himself if he runs for president in 2024. Unfortunately, another Trump run seems inevitable. Reportedly, he’s considering officially declaring his candidacy within the next few weeks.

That would be a tactical mistake. It puts him in a no-win situation for November. If Republicans do well in the midterms, he would receive little credit because that was expected. If Republicans underwhelm, he would look like an electoral anchor and a surefire loser in 2024.

Instead of declaring, he would be better off spending heavily on his preferred candidates. If they win, Trump can plausibly claim credit, and they would owe him politically if he runs for president. If they lose, Trump can say it shows why Republicans need him at the top of the ticket generating excitement.

Trump’s rush to announce his 2024 intentions is a sign of weakness. He’s reacting rashly to voters’ interest in other candidates. For instance, a recent New Hampshire poll showed Florida Gov. Ron DeSantis leading Trump and other candidates.

While Trump generally leads in polling, DeSantis’ upswing is unmistakable. It’s likely to continue as voters learn more about his political courage and policy accomplishments. In contrast, Trump’s obsession with the 2020 election has worn thin with many Republican voters.

One thing to watch for in Friday’s remarks: DeSantis endorsed Laxalt and headlined a Las Vegas rally for him. Will Trump resist taking a shot at DeSantis over who deserves the most credit for Laxalt’s victory? The correct answer is Laxalt. But Trump doesn’t like to share praise.

If he did, his path forward would be clear. He could rest confidently in his generational accomplishments — from the Supreme Court to foreign policy. He also reshaped Republican Party priorities and opened new inroads to minority voters. Future Republican nominees, such as DeSantis, would be his legacy, not his competitors.

Instead, Trump appears ready to throw that away because his ego craves being the center of attention.

If Trump wants to be president again, here’s what he should do — wait.

While I think DeSantis would be favored in a head-to-head match-up, Trump has a much better chance in a crowded field. The best way to ensure many candidates is for Trump to stay out initially. Candidates other DeSantis who appear interested include Mike Pence, Nikki Haley, Mike Pompeo, Ted Cruz and Glenn Youngkin. Without Trump, there would probably be a dozen or more hopefuls. That would give Trump the opportunity in October 2023 to declare the field is so divided that he feels a duty to run and unify Republicans.

Strategic patience and discipline, however, aren’t Trump’s strong suits. If he had deployed them throughout his presidency and second campaign, he wouldn’t have lost in 2020.