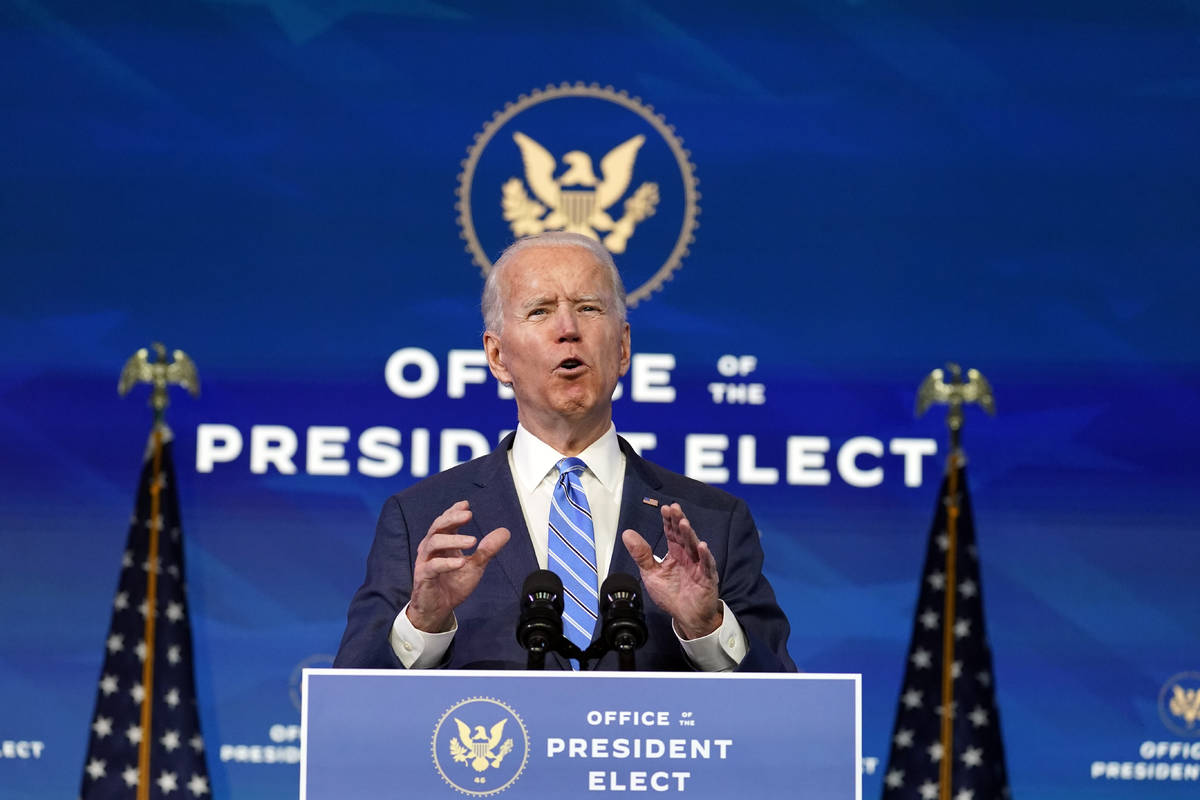 President-elect Joe Biden speaks about the COVID-19 pandemic during an event at The Queen theater, Thursday, Jan. 14, 2021, in Wilmington, Del. (AP Photo/Matt Slocum)

Biden ran for president as someone who would bring the country together. The theme underlying his campaign was a return the country normalcy, ushering in a new era of peace in politics.

“Too many Americans see our public life, not as an arena for mediation of our differences, but rather they see it as an occasion for total, unrelenting, partisan warfare,” Biden said in an October speech. “Instead of treating each other’s party as the opposition, we treat them as the enemy. This must end.”

This is admirable and a much-needed sentiment. In many ways, President Donald Trump’s presidency stemmed from Americans who felt attacked or abandoned and were looking for a defender, even a flawed one.

The left controls most major American institutions, outside of religious organizations. Daring to stray from their orthodoxy could cost someone their job, their reputation or worse.

On college campuses, mobs frequently try to silence conservative speakers. Now, some universities are blocking them from even receiving invitations.

On Thursday, Politico writers were aghast that its management allowed Ben Shapiro to write a guest column. Shapiro hosts the most popular conservative podcast in the country. Ironically, Shapiro’s column was on how conservatives believe “members of the opposing political tribe want their destruction.”

In the past two weeks, technology companies have kicked some conservatives off social media and even taken away their ability to host their websites.

Not treating your political opponents as “the enemy” would be welcome by many on the right side of the political aisle.

This is Biden’s dilemma. He won the presidency but didn’t earn a mandate for his radical agenda. That’s what happens when your main pitch is that you’re not somebody else. Most of his major policies, such as raising taxes and the Green New Deal, won’t be popular.

If there’s open debate among the public, most of his policies are going down in flames. That’s especially true with such narrow Democrat majorities in Congress.

If Biden can polarize the electorate, however, he has a better chance. This involves creating a false dichotomy: You either support Biden’s plan or you’re enabling those Trump supporters who attacked the U.S. Capitol.

That doesn’t make logical sense. There is no conflict in opposing both those things. But if he can pull off this rhetorical two-step, the rewards are immense. What happened on Jan. 6 rightly repulses the vast majority of Americans. If you can lump your opponents in with that group, you’ll have wide support.

Many on the left are already trying to do this. Rep. Alexandria Ocasio-Cortez said that the members of Trump’s Cabinet who resigned after the riots would “forever” be “stained with the deaths of five people.” Rep. Eric Swalwell compared Trump to Osama bin Laden planning the 9/11 attacks.

“If you voted for Trump, you voted for the person who the Klan supported,” CNN host Don Lemon said. He continued, “That’s the crowd you are in.”

These are all attempts to marginalize Trump supporters by declaring them to be beyond what is acceptable. In the words of Biden, treating “them as the enemy.”

If Biden wants to make “America United” more than his inauguration theme, these are the types of actions and words he needs to condemn.