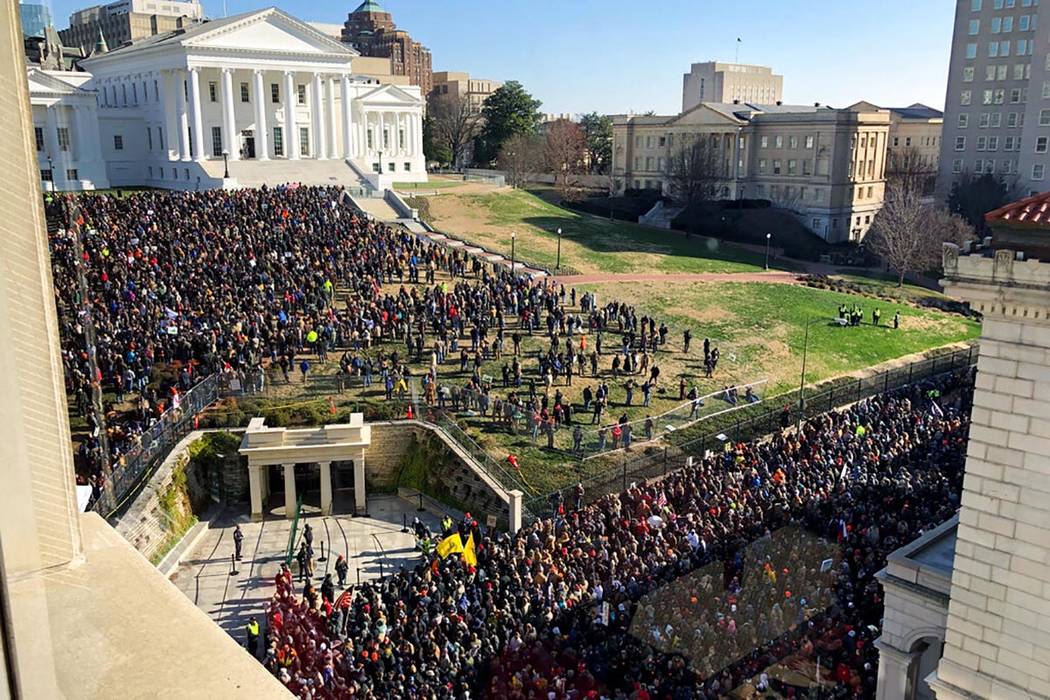 Demonstrators are seen during a pro-gun rally, Monday, Jan. 20, 2020, in Richmond, Va. Thousands of pro-gun supporters are expected at the rally to oppose gun control legislation like universal background checks that are being pushed by the newly elected Democratic legislature. (AP Photo/Sarah Rankin) 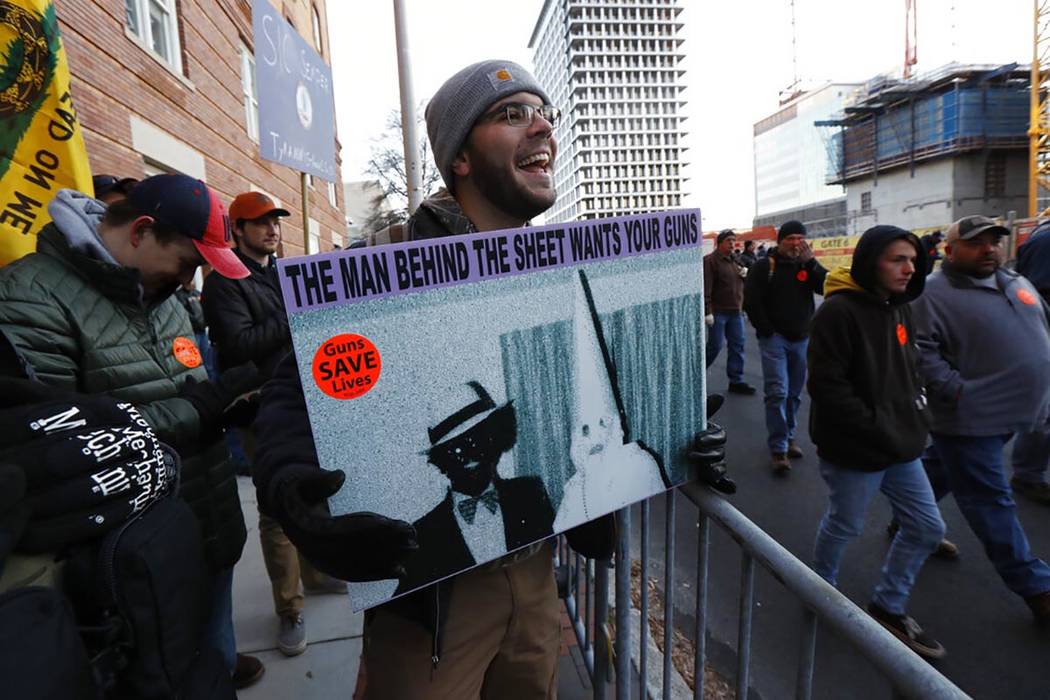 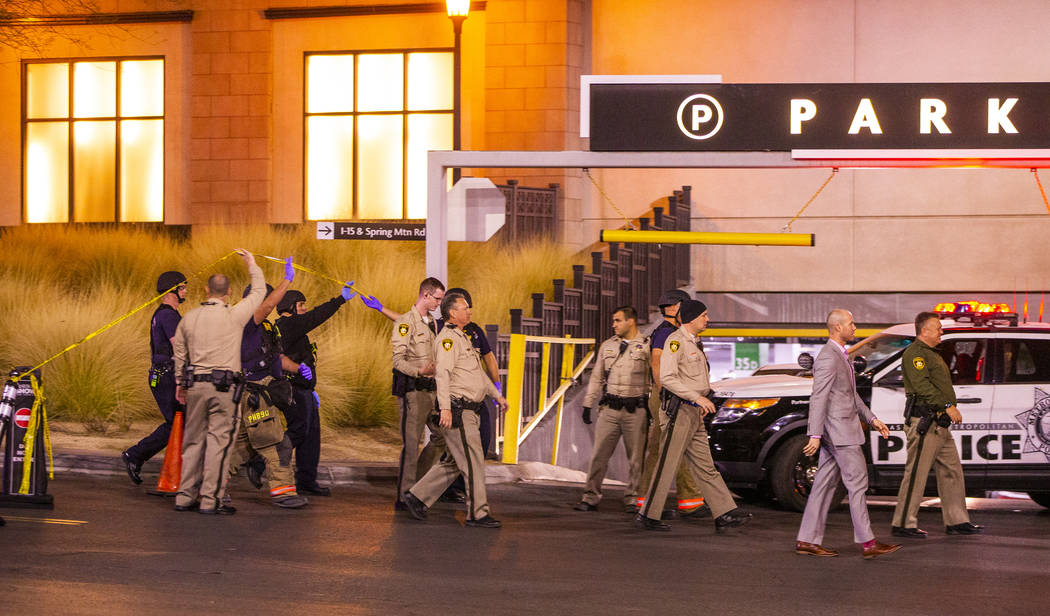 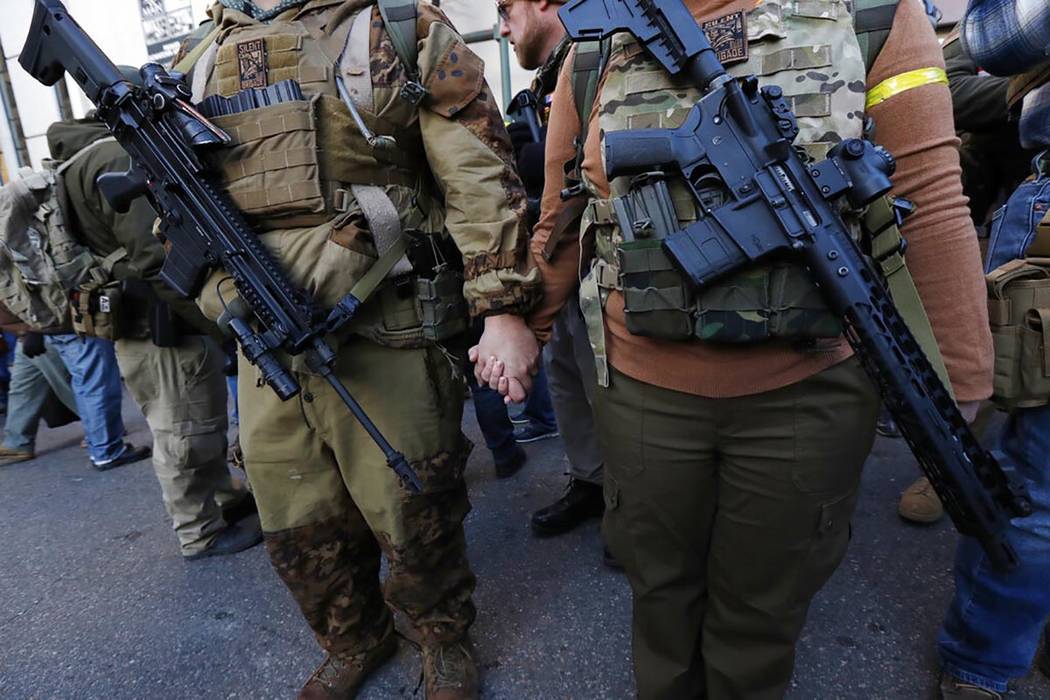 Those who think America has a problem with guns should compare what happened last week at the Virginia Capitol to the shooting at the Fashion Show mall.

On Monday, more than 20,000 people gathered at the Virginia Capitol building in Richmond for a gun rights rally.

As you might expect, many of them brought their firearms. Rallygoers were openly carrying their handguns and semi-automatic rifles. Many of the rifles were the scary-looking ones that gun grabbers label as “assault weapons.” One gun range owner even brought a .50-caliber sniper rifle.

The left went nuts before the rally. Virginia Gov. Ralph “Blackface” Northam temporarily banned firearms from the Capitol. He claimed that intelligence showed there was “a threat of armed militia groups storming our capitol.” He also claimed that the rhetoric leading up to the event was similar to that before the 2017 white supremacist rally in Charlottesville.

There was a reason for concern. Law enforcement arrested seven neo-Nazis who had planned to attend the rally. But there was no evidence that rally organizers invited them or wanted those racist dirtbags to attend the yearly gathering. You can’t stop a few people with whom you disagree from showing up in a crowd of tens of thousands of people.

“This is the scene in Richmond,” MSNBC anchor Craig Melvin said on Monday. “They put white nationalists, militia groups and supporters of background checks for gun purchases all in one place. A lot of folks, justifiably so, are worrying about a repeat of Charlottesville in 2017.”

There were plenty of guns in Richmond on Monday but no violence. To avoid Northam’s gun ban, most rallygoers remained on nearby streets, instead of going on Capitol grounds.

I almost feel bad for gun grabbers and the media, but I repeat myself. It must be so confusing to have tens of thousands of guns in one place and no acts of violence. You could almost feel the tears of disappointment. “Pro-gun rally ends peacefully despite fears of extremist violence,” one CNN chyron read.

Of course it did. White supremacy is idiotic, but even its adherents realize that attacking black people or police officers while attending a gun rally is a bad idea. The vast majority of gun owners aren’t racist, support the police and have the means to defend other people.

The mere presence of a gun doesn’t cause violence. As seen in Virginia, an abundance of firearms can prevent criminal activity.

Gun-free zones, however, present no such deterrence. Unfortunately, Las Vegas saw another example of that on Tuesday.

The Fashion Show mall’s code of conduct prohibits firearms. That didn’t stop an 18-year-old from bringing a handgun into the mall. He got in an argument and pulled out his weapon. He shot the person he was arguing with and two innocent bystanders. Fortunately, all of the victims are expected to survive.

What should give gun grabbers pause is that this shooting doesn’t appear premeditated. There’s no telling how often this man carried his gun into a supposed “gun-free” zone or how many others were doing it, too.

Gun grabbers focus most of their efforts on restricting legal access to firearms and accessories. They should spend more time trying to stop those, such as the Fashion Show mall shooter, who ignore signs proclaiming some area is “gun free.”