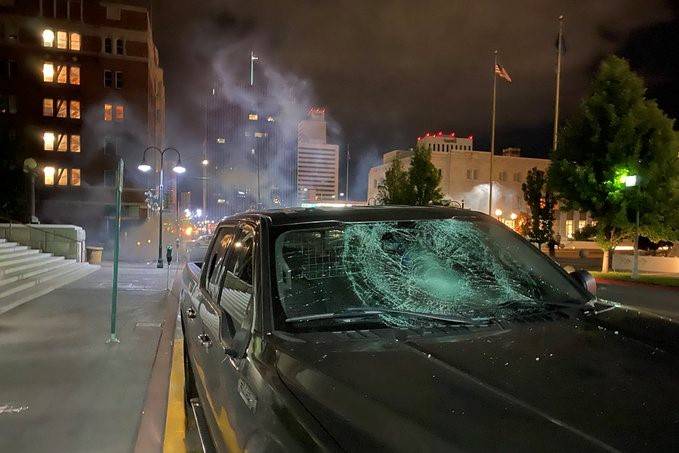 A damaged car is seen during a violent Black Lives Matter protest in downtown Reno on Saturday, May 30, 2020. (Colton Lochhead/Las Vegas Review-Journal) 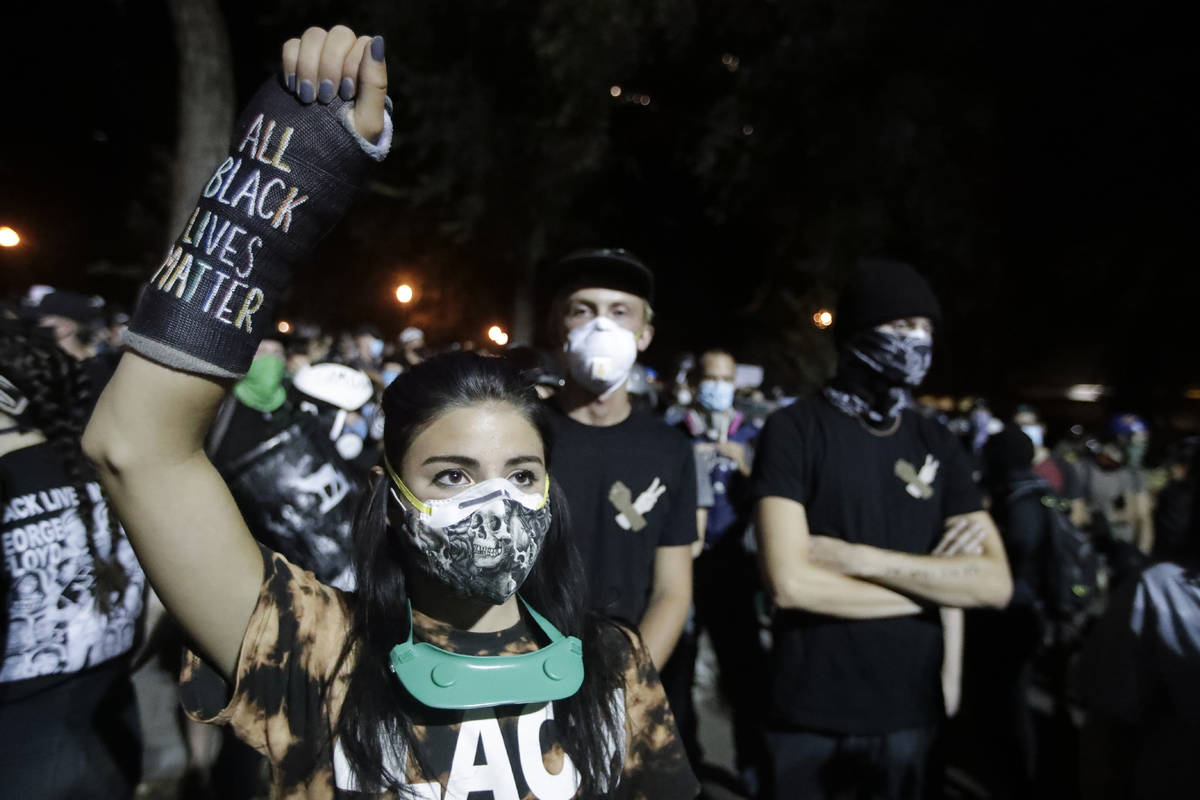 A demonstrator raises her fist while listening to a speech during a Black Lives Matter protest at the Mark O. Hatfield United States Courthouse Thursday, July 30, 2020, in Portland, Ore. After days of clashes with federal police, the crowd outside of the federal courthouse remained peaceful Thursday night. (AP Photo/Marcio Jose Sanchez)

There is far more evidence that Black Lives Matter protesters are systemically violent than there is that police are systemically racist. Just don’t expect the national mainstream media to mention it.

Earlier this month, a study found that fewer than 7 percent of the protests connected to the Black Lives Matter movement engaged in violence or destructive activity. The Armed Conflict Location & Event Data Project conducted the research. Based on its findings, it declared that BLM was “an overwhelmingly peaceful movement.”

The media took that part of the report and ran with it.

“Report tracks thousands of summer protests, most nonviolent,” The Washington Post headline read. “About 93% of racial justice protests in the U.S. have been peaceful, a new report finds,” CNN wrote. There were similar reports from HuffPost, Time and The Hill.

The study contained additional details as well. It identified nearly 570 violent demonstrations, which have taken place in around 220 locations. Keep those numbers in mind as you read this brief overview of the media’s coverage of violence over the past four months.

“Some of the pillaging that occurred during George Floyd protests on the weekend after Memorial Day appeared to have stemmed from otherwise peaceful marches,” USA Today wrote. After protesters occupied several blocks in Seattle, the media furiously downplayed it. The Associated Press labeled it a “festive zone.”

“The protests in Portland were mostly peaceful, though they have at times devolved into violence, vandalism and arson,” CNN reported in July. Also in July, ABC News dismissed protesters setting fire to a California courthouse and attacking police as occurring after “a peaceful demonstration intensified.”

A personal favorite came from Kenosha, Wisconsin. A CNN reporter stood in front of a raging fire set by looters and vandals. The chyron at the bottom of the screen read, “Fiery but mostly peaceful protests after police shooting.”

When it comes to protesters, the national mainstream media have made their standard clear. Hundreds of instances of violence in just a few months aren’t enough evidence to disparage the larger group with which some of the lawbreakers identify.

Contrast that with how the media reacted after the death of Floyd. Two weeks after Floyd’s death, ABC News reported that Black Americans are victims of “ongoing police brutality.” Two days later, CNN attacked President Donald Trump for “ignoring systemic racism” in his response to Floyd’s death. Keep in mind that there is still no evidence the police officers involved in Floyd’s death were acting out of racial animus.

In 2018, there were more than 680,000 full-time police officers in America, according to Statista. This year, there have been four high-profile confrontations involving police and an African American: Floyd, Breonna Taylor, Rayshard Brooks and Jacob Blake. Combined, around a dozen officers were involved in those situations, although a smaller number fired weapons or restrained Floyd.

In these instances, 0.002 percent of police officers acted in a manner that has led to controversy. It’s likely some of those officers will be found to have acted appropriately. If the media were consistent, their headlines would have read, “Man dies while being restrained by police, a rare occurrence.” Or “Fighting with police officers greatly increases one’s chances of being shot.” But those statistical truths don’t fit the their preferred narrative.

The national mainstream media have created this paradox. If the public held police to the same standard that the media uses for Black Lives Matter, there would be nothing to protest.

— Victor Joecks’ column appears in the Opinion section each Sunday, Wednesday and Friday. Listen to him discuss his columns each Monday at 3 p.m. with Kevin Wall on AM 670 KMZQ Right Talk. Contact him at vjoecks @reviewjournal.com or 702-383-4698. Follow @victorjoecks on Twitter.