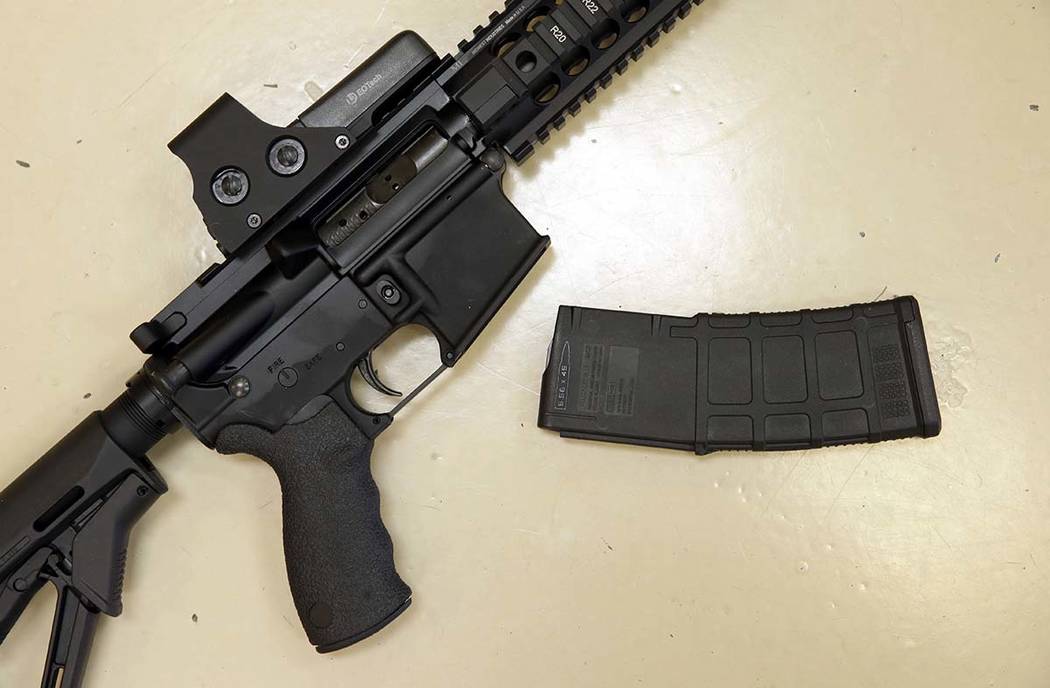 A custom-made semi-automatic hunting rifle with a high-capacity detachable magazine is displayed at a gun store in Rocklin, Calif. (AP Photo/Rich Pedroncelli)

Guns are in the news again. Democrats shamelessly use every mass shooting tragedy as an opportunity to take away the God-given rights of gun-owning Americans.

Never forget what Rahm Emanuel, the former chief of staff for President Barack Obama, once said: “You never want a serious crisis to go to waste.”

Did you know that 41 people were shot — seven of them killed — over the Labor Day weekend in Chicago? Isn’t that a “mass shooting?” Doesn’t 100 percent Democrat-controlled Chicago already have the strictest gun control in the country?

I want President Donald Trump to call their bluff. Democrats want “universal background checks” on all gun sales. Let’s give it to them — as soon as Democrats agree to federal government-issued photo and fingerprint ID for every voter in America.

Now there’s a grand bargain. Isn’t that an offer too good to refuse? Democrats claim they want to stop gun violence. They claim universal background checks are the answer. So why would they reject this offer?

Are they so frightened by voter ID they’re willing to let gun violence and mass shootings continue unabated?

What’s so scary about voter ID? Don’t Democrats claim “election integrity” is a priority? Aren’t they worried about “foreign interference” in U.S. elections?

Plus, you get universal background checks in the bargain. It’s a big win for Democrats, right? Mass shootings will instantly be prevented, right?

The proof of gun control’s failure is Chicago and every other U.S. inner city controlled by Democrats. These cities have strict gun control but are plagued by massive gun violence.

Want more proof? Mexico might have the strictest gun control on the planet. There is one gun store in the entire country of Mexico. That didn’t stop even one of the 36,000 murders in Mexico last year.

The proof is our great ally, the United Kingdom. They have strict, strict gun control and a violent crime rate comparable to America’s.

Gun control doesn’t work. But if it makes liberals feel all warm and fuzzy, let’s compromise. President Trump, please offer background checks for every gun purchase in America in return for voter ID for every citizen.

So, go ahead and make the offer, Mr. President. Call it “The Grand Bargain.” They’ll never take it.

Wayne Allyn Root (Wayne@ROOTforAmerica.com) is host of the nationally syndicated “WAR Now: The Wayne Allyn Root Show.” Listen from 3 to 6 p.m. daily at 790 Talk Now and watch at 5 p.m. on Newsmax TV.