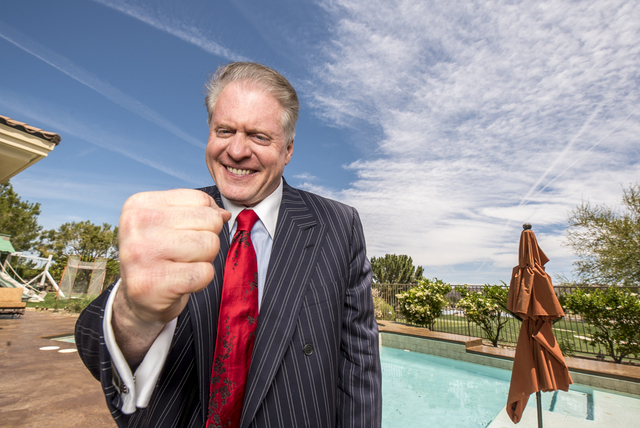 Wayne Allyn Root, poses for a photo at his home in the Anthem community in Henderson, Nev. on Wednesday, May 4, 2016. (Joshua Dahl/Las Vegas Review-Journal)

This is my first column for the Las Vegas Review-Journal. I am grateful for this opportunity.

There has never been a columnist for a big-city newspaper with my background. I’m a son of a butcher, small businessman, serial entrepreneur, home-school father, capitalist evangelist, warrior for the middle class, Reagan conservative with libertarian leanings and relentless believer in the greatness of America.

I believe in the principles of our Founding Fathers — Washington, Jefferson, Madison, Adams and Franklin — the greatest group of individuals that ever existed, at one time, in one place, in human history. Like those patriots, I believe in limited government, low taxes, reduced government spending and entitlements, economic and personal freedom, a pro-business agenda and power to the people.

I was taught by my father that certain principles made the United States the greatest nation in world history: God, country, family, Judeo-Christian values, American exceptionalism, the Constitution, capitalism, the police and military. But all are under massive assault in the Obama era. A purposeful plan is afoot to “fundamentally change America” — to destroy the American Dream of mobility, opportunity and prosperity — to make us all dependent on government.

I understand the American Dream is real because I’ve been blessed to experience it. My father promised me that if I studied hard, I could achieve anything in America. He was right. I graduated valedictorian and was accepted at the Ivy League’s Columbia University. Only in America.

Having never taken a single course in broadcasting or appeared on TV in my life, I decided to become a national TV personality. Crazy, right? Yet my first TV job was hosting shows on CNBC. Only in America.

Even though I never took a writing class in my life, I decided to become an author. My first book was rejected by 100 publishers. That was five national best-sellers ago. My 11th book was just published: “Angry White Male: How the Donald Trump Phenomenon is Changing America.” Only in America.

I’d never been to Las Vegas when I decided to become “King of Vegas.” I turned my oddsmaking talents into a million-dollar industry leader. My odds and sports handicapping advice was featured in media across the globe, attracting more than 3 million callers and clients. Only in America.

With no prior experience, I decided to produce TV shows. I just sold my third TV series to Hollywood, with two more on the way. All of them are Vegas-related, including “Las Vegas Law,” about the Clark County district attorney’s office. Only in America.

I decided to enter politics, and in my first try became the Libertarian Party’s vice presidential nominee. Today I am a political commentator on Fox News and hundreds of radio stations. Only in America.

I decided to become a conservative radio talk show host. I turned my vision into a hit show in the greatest city on earth, Las Vegas. It airs weekdays from 3 to 6 p.m. on KBET, 790-AM. I now have multiple offers on the table to syndicate my show across the country. Only in America.

And now, there’s this column, my newest and most exciting venture to stamp my unique brand of Reagan-Trump-conservative-libertarian-populist-America-first politics on the people of Nevada, in the largest newspaper in the state. What an honor. Only in America.

I hope you’re getting it now — you won’t find a column like this in any other newspaper in America. It will celebrate capitalism, prosperity, economic freedom, small business, the private sector and creative ideas for saving our national treasure: the great American middle class.

I guarantee my energy and enthusiasm will be fun, exciting and contagious. Let’s “make America great again” — together.