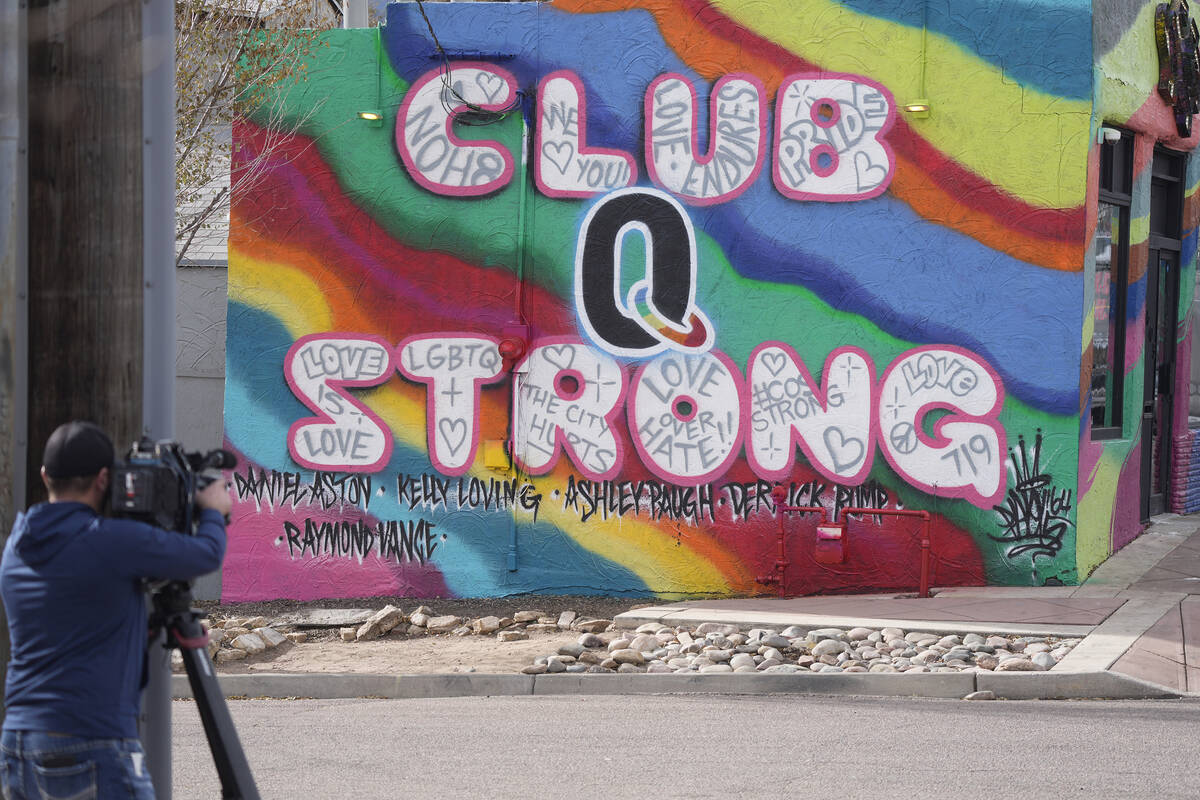 A television cameraman works near a tribute to the victims of a mass shooting at a gay nightclub painted on the side of a downtown commercial buiding Wednesday, Nov. 23, 2022, in Colorado Springs, Colo. (AP Photo/David Zalubowski)

Dear America, we good? You don’t know me. Even though I’m your native son.

As a Mexican American in the Southwest — a gem of a region snatched from our neighbor more than 170 years ago — I never know what my country wants from me.

I’m also never sure whether fellow Americans consider me — and those like me — a blessing or a burden. I hope many of them are now leaning toward the former, thanks to Club Q shooting hero Rich Fierro.

Note to fellow journalists: The name is not pronounced “Fee-row,” as I heard from white reporters who understand Spanish only un poquito. It’s “Fee-EH-roh.” It means “iron.”

Apparently, that’s what the 15-year veteran U.S. Army major is made of. When Fierro realized a man armed with multiple firearms, including an AR-style rifle, was spraying bullets inside a LGBTQ nightclub in Colorado Springs, his military training — “Go to the fire. Stop the action.” — kicked in.

He moved to disarm the shooter, who was decked out in body armor, and yanked him to the ground. He yelled for help from Thomas James, a fellow patron. James kicked the shooter in the head, while Fierro punched him into submission. “I tried to finish him,” Fierro said.

We interrupt this tale of heroism for a bulletin of hate. Fierro is having to suffer idiocy and bigotry from conservatives on right-wing social media because that’s how the trolls roll.

For the close-minded, the most troubling part of the Nov. 19 attack on Club Q is not that five people were killed and at least 17 others were wounded. It’s not that there are too many guns, that guns are easier to get than tickets to a Taylor Swift concert or that our gun laws are a joke because the ghouls in the gun lobby totally own GOP lawmakers.

For the “deplorables” on the extreme right, the worst part of this story is that a no-nonsense Army veteran such as Fierro — who did three tours in Iraq and one in Afghanistan, receiving two Bronze Stars and a Combat Action Badge — was in a place such as Club Q to begin with.

According to Vice News and researchers at Advance Democracy Inc., a nonprofit that tracks online extremism, Fierro’s tormentors include far-right troll Jack Posobiec, who said on social media: “Are we just not supposed to talk about the US Army Major taking his family down to the local drag club for a night out?” One of Posobiec’s followers chimed in: “Heroes don’t take their kids to drag shows.”

Fierro was at the club with daughter Kassy, her boyfriend, Raymond (who was fatally shot), and other friends to see one of Kassy’s friends perform in a drag show and celebrate a birthday.

During the melee, Fierro told another clubgoer who ran by to kick the gunman. That patron stomped the attacker’s face with a high heel.

Police credit Fierro and the others with saving lives.

Gun fanatics worship the idea of a “good guy with a gun.” Well, sometimes a few good people without a gun can still save the day.

It doesn’t. It means everything.

A cohort that represents nearly 1 in 5 Americans but is still maligned and misunderstood, Latinos are the great American paradox. We’re the ultimate insiders who are constantly made to feel as if we’re on the outs. We assimilate and serve and sacrifice in search of America’s approval, and we can’t even get a “gracias.” We always have to show our worth, prove our value, pledge our loyalty. It’s exhausting.

Plus, we’re turned into piñatas by opportunistic and race-baiting politicians, such as Texas Gov. Greg Abbott. The Republican said nothing as Mexican workers built the Lone Star State over the past few decades. Now he declares an “invasion” on the southern border.

Rich Fierro is the one. His bravery helps the nation see who we really are and what we bring to the party.

The story of Latinos in the United States must be told — in full. In a bloodstained crime scene at an LGBTQ club in Colorado Springs, an inspiring chapter was written.