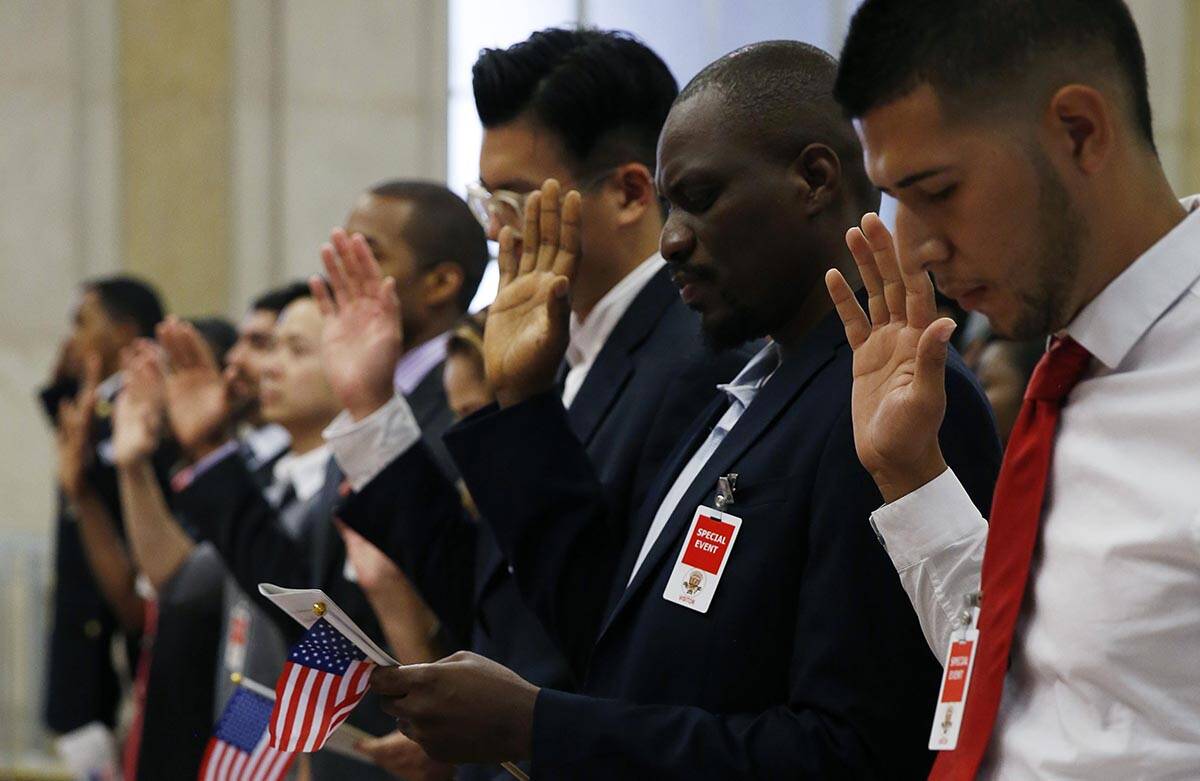 Participants take the oath of allegiance during a naturalization ceremony for 70 citizenship candidates at the Justice Department in Washington July 22, 2014. (REUTERS/Gary Cameron)

In America, the relationship between immigrants and the native-born is complicated. Sometimes, it’s also confusing. One reason for the confusion is that the U.S. immigration debate is jam-packed with paradoxes, untruths and contradictions.

Perhaps the biggest paradox of all is the fact that a country that advertises itself to the world as the land of immigrants has never really cared much for actual immigrants, no matter why they come or where they come from. The Chinese were kept out in the 1880s. The Jews were turned away in the 1930s. The Hondurans were shut out in the 2010s. The actors change, but the script stays the same.

A whopper of an untruth is that Americans have a problem only with undocumented immigrants and that we unequivocally welcome immigrants who go to the trouble of coming legally. Not so. Almost all immigration to the United States was legal until the restrictive Immigration Act of 1924. And yet, for two centuries before that, legal immigrants were still hassled by the native-born because of their language, religion or culture.

Recently, I got an up-close look at this major contradiction. While many Americans say they agree with the idea that legal immigrants are one of the best things about this country, some have second thoughts about that claim once they discover immigration runs counter to their nationalistic impulses.

After all, if immigrants are so great, what does that make the native-born? Answer: not so great.

I’ll plead guilty. My immigrant grandfather Roman — who came from Chihuahua, Mexico, in the early 1900s during the Mexican Revolution — had a much stronger work ethic than I do and not even a touch of the entitlement that plagues so many Americans today.

The comparison between immigrants and the native-born spilled out this week onto the airwaves of a radio show in Fresno, Calif. Host Ray Appleton is a white male Republican who has been a friend for nearly 30 years.

A few days earlier, I had written a column defending Virginia Lt. Gov.-elect Winsome Sears from vile and unfair attacks from small-minded folks on the left who are frightened by the idea of a female Black Republican ascending to a position of power.

Appleton bristled at the column. And so he invited me on to his show to discuss it. He was bothered by the headline: “Immigrants make America better, and that includes politics.”

You see, Sears isn’t only a 57-year-old Black woman striving to get respect in America. She is also an immigrant from Jamaica who — looking at the opportunities afforded by this country — sees blue sky where many other African Americans see red lines.

To Appleton, that sounded an awful lot like identity politics. And he’s not a fan of the concept.

“It’s not what a person is — which we hear about so much in this era of political correctness,” he told his audience. “It’s who they are and what they bring to the party when trying to press for qualifications, rather than determining that this person is that color and this color and deserves whatever they get because they are that color.”

Not sure how we got onto color. In any case, as immigrants go, I would argue that Sears is more the rule than the exception.

Immigrants don’t whine or make excuses or complain that America’s best days are behind her. They don’t play the victim or sue because their kid didn’t get into an elite university or demand that Uncle Sam institute tariffs on foreign steel and reopen the abandoned factory at the edge of town. They just work their fingers to the bone and take care of business.

Frankly, that’s one reason that the native-born resent immigrants: They make us look bad by comparison. So yeah, immigrants make America better. And yes, that includes politics.

Appleton is impressed by Sears, just like I am. And ultimately, he understood what I was trying to say. “We’re on the same page,” he declared.

Here’s what I think just happened. I believe that some white Republicans are — as a class of people — so traumatized by decades’ worth of being called “racist” against immigrants that they sometimes reflexively try to downplay or ignore a person’s immigration status.

That’s a mistake, especially when the immigrant who is shining bright is a fellow Republican. In poker, it’s like folding your cards when you have a full house.