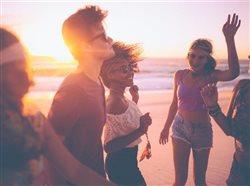 An important lesson for your teen this summer

(BPT) – With summer underway, kids of all ages are enjoying a break from school by spending more free time with their friends. As kids enter their teenage years, summer camp and swim lessons are traded for hanging out with friends, often without adult supervision.

While many parents want to foster independence, the lack of organized activities and adult supervision during these months present teens with more opportunities to experiment with substances. In fact, the highest rates of teen substance use are seen in the summer, and, if a teen is already using, their use significantly spikes during this time of year.

According to the National Survey on Drug Use and Health, first-time use of most substances peaks during June and July. On an average day during these months:

* More than 4,800 youths use marijuana for the first time

* More than 5,000 youths smoke cigarettes for the first time

“We often hear from teens and young adults that they started experimenting with drugs and alcohol out of curiosity or boredom,” says Dr. Thomas Wright, chief medical officer at Rosecrance, a leading teen substance abuse treatment center. “For some, occasional use of these substances evolves into full-blown addiction, even though they believed they could stop whenever they wanted.”

Parents should remind teenagers of the danger that comes with even occasional substance use, as there is no safe level of substance use for teens, whose brains are still developing. Research shows teens become addicted faster than adults and that the earlier they begin using substances, the more likely they are to become dependent.

Another contributing factor to substance experimentation among teens is peer pressure. As children grow, parents have less influence on their kids. By their teen years, peers are the most influential group in a child’s life and pressure to fit in may cause some teens to experiment with substances. Parents also need to recognize that teens may become skilled at hiding such activities.

“Teens in our treatment centers have shared a variety of creative ways they’ve hidden their substance use from parents,” says Dr. Wright. “Replacing bottled water with clear alcohol, sneaking unused prescriptions out of bathroom cabinets and hiding drug paraphernalia outside the home are just a few examples. It is important that parents are vigilant and proactive during the summer months by checking in with their teens regularly, encouraging them to participate in productive, structured activities and, most importantly, talking openly with their teens about drugs and alcohol.”

The discussion begins with you

While these conversations aren’t easy, they make a difference. Kids who learn about the dangers of substances at home are up to 50 percent less likely to use them than those who don’t, according to research from the U.S. Department of Justice Drug Enforcement Administration. Understanding teens’ perspectives around substances can help make it easier to understand the pressures they face and help guide these conversations. Teen-specific resources are available at Rosecrance.org, including “Been There: Teens in Recovery Tell It Like It Is,” a booklet created by teens in recovery to help prevent other teens from ever knowing the pain of addiction.