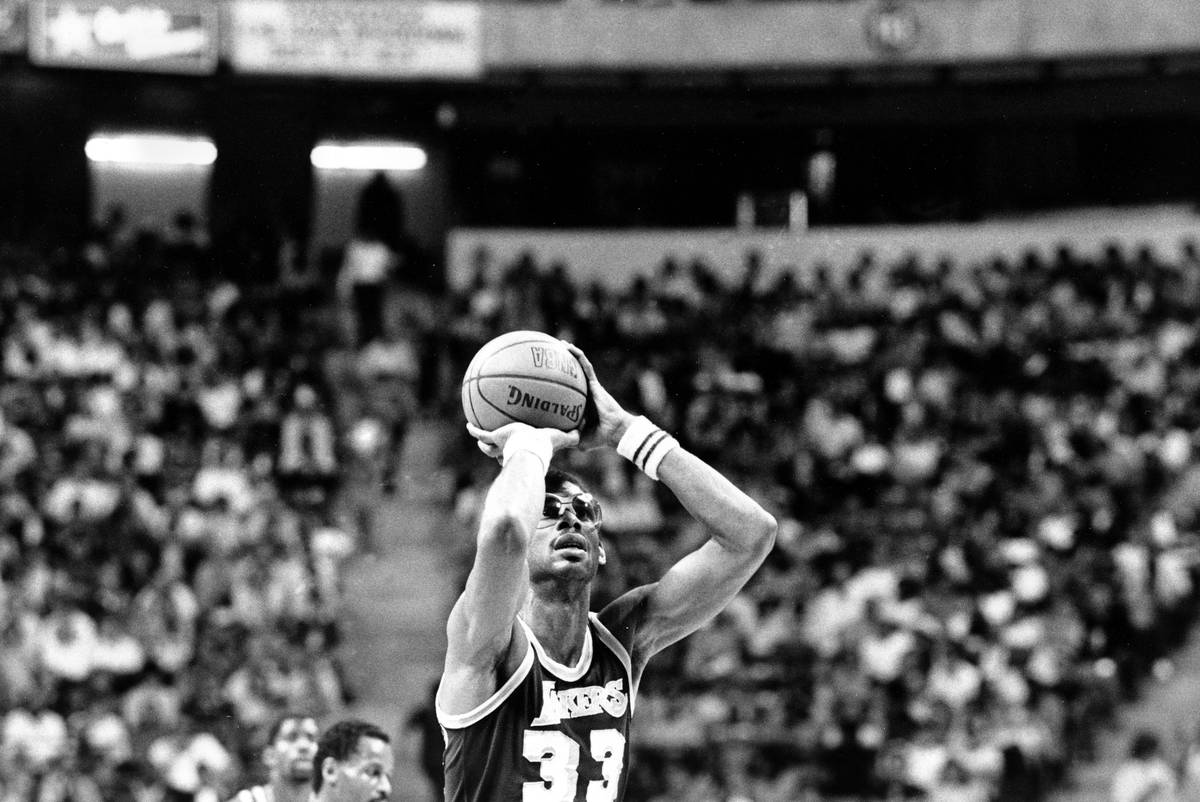 Los Angeles Lakers center Kareem Abdul-Jabbar (33) shoots one of his baskets on his way to breaking Wilt Chamberlain's NBA scoring record during action against the Utah Jazz in Las Vegas, Nev., Thursday, April 5, 1984. Abdul-Jabbar needed 21 points and scored 22 points to give him a regular season record of 31,421 points. (AP Photo/Lennox McLendon) 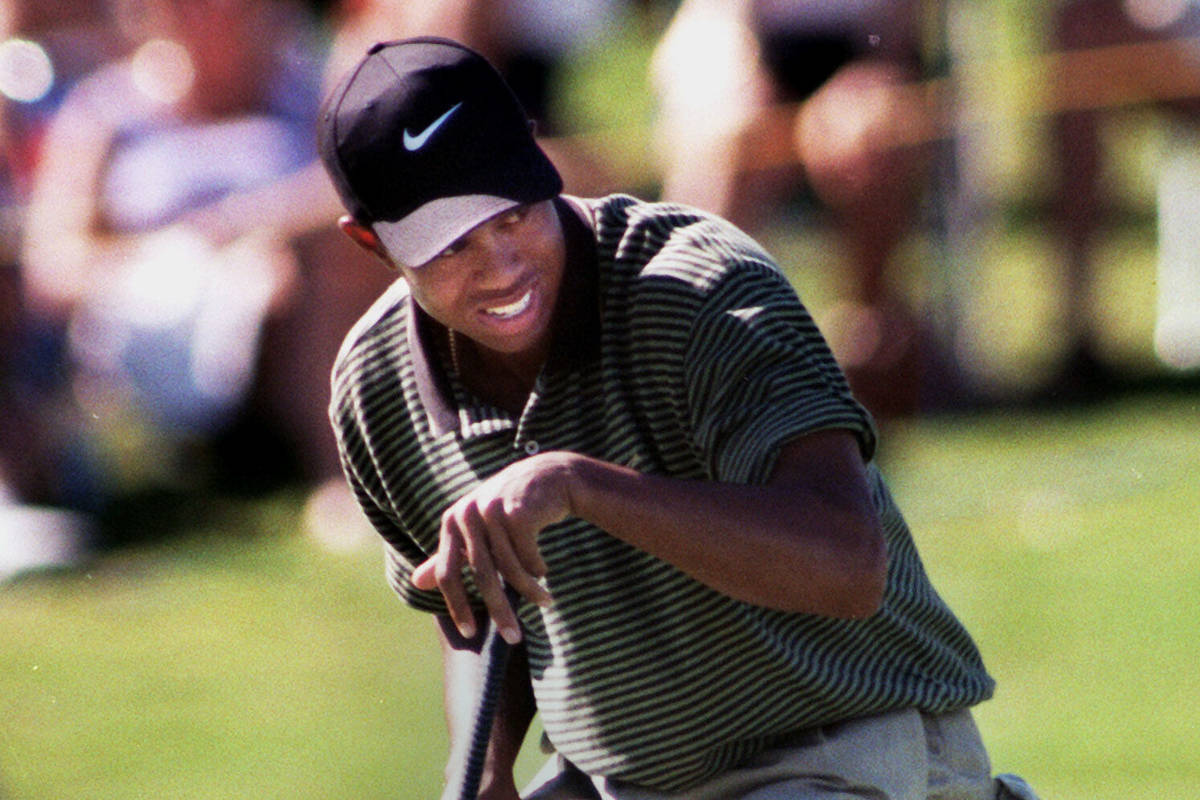 Tiger Woods defeated Davis Love III on the first hole of a sudden death playoff to notch the first pro victory of his spectacular career in the Las Vegas Invitational at TPC Summerlin in 1996. (Las Vegas Review-Journal/File) 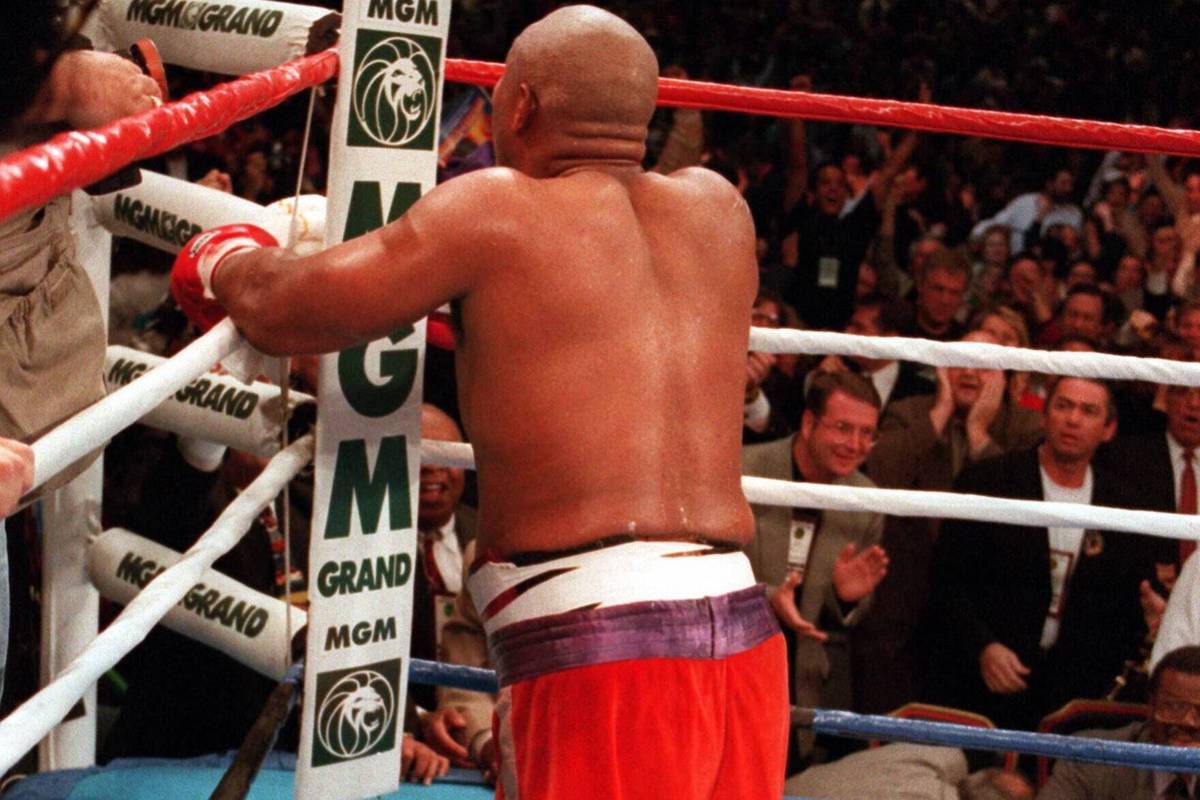 George Foreman kneels and prays after knocking out Michael Moorer in the 10th round on Nov. 5, 1994, at MGM Grand in Las Vegas. (Las Vegas Review-Journal/File) 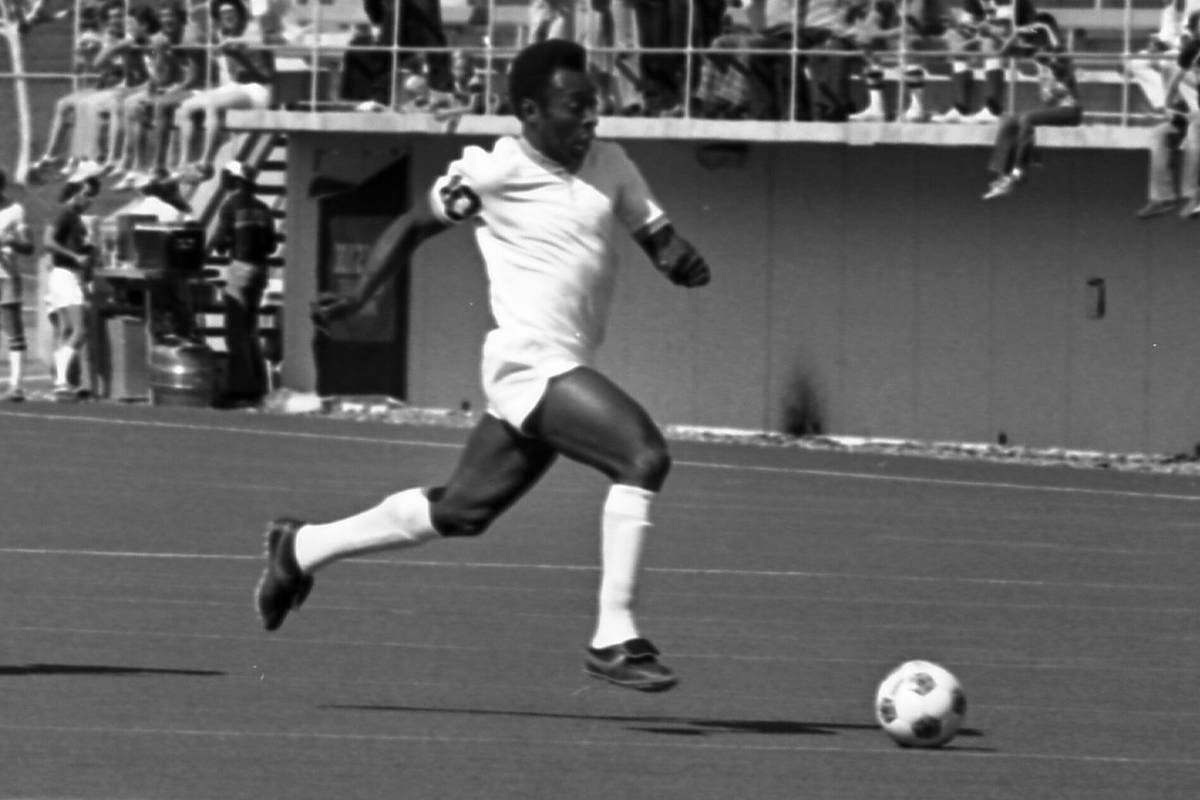 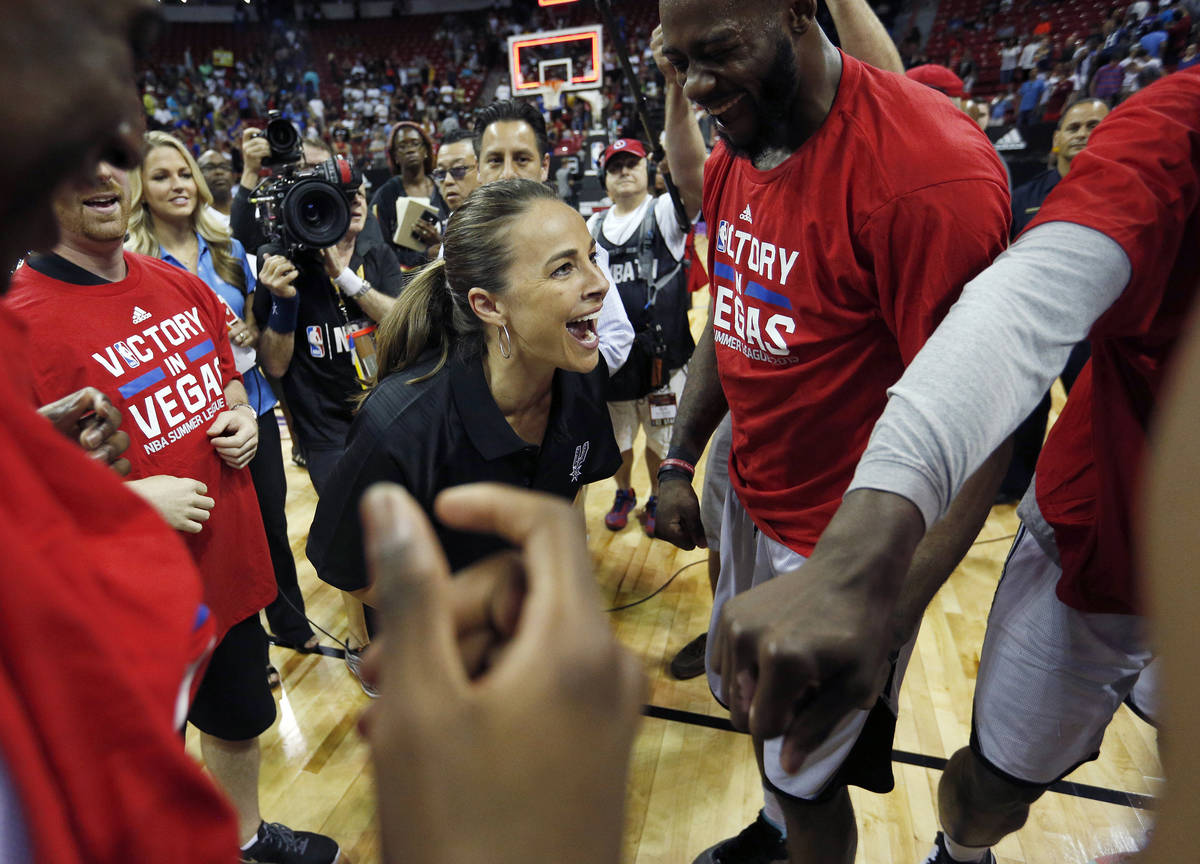 FILE - In this July 20, 2015, file photo, San Antonio Spurs coach Becky Hammon celebrates with her team after they defeated the Phoenix Suns in an NBA summer league championship basketball game in Las Vegas. Becky Hammon dreamed of playing in the NBA when she was young. She never got a chance to make that happen. Now though, she's giving girls hope of a chance to coach in the NBA. (AP Photo/John Locher, File) 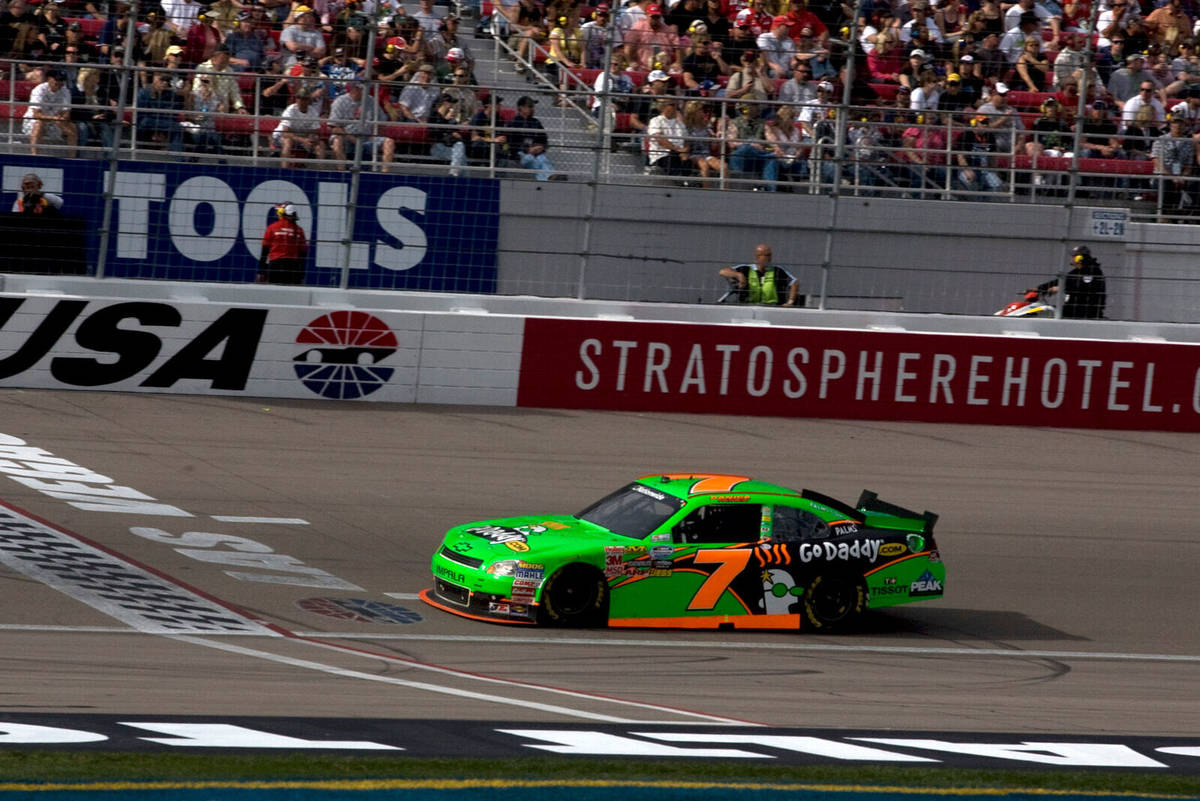 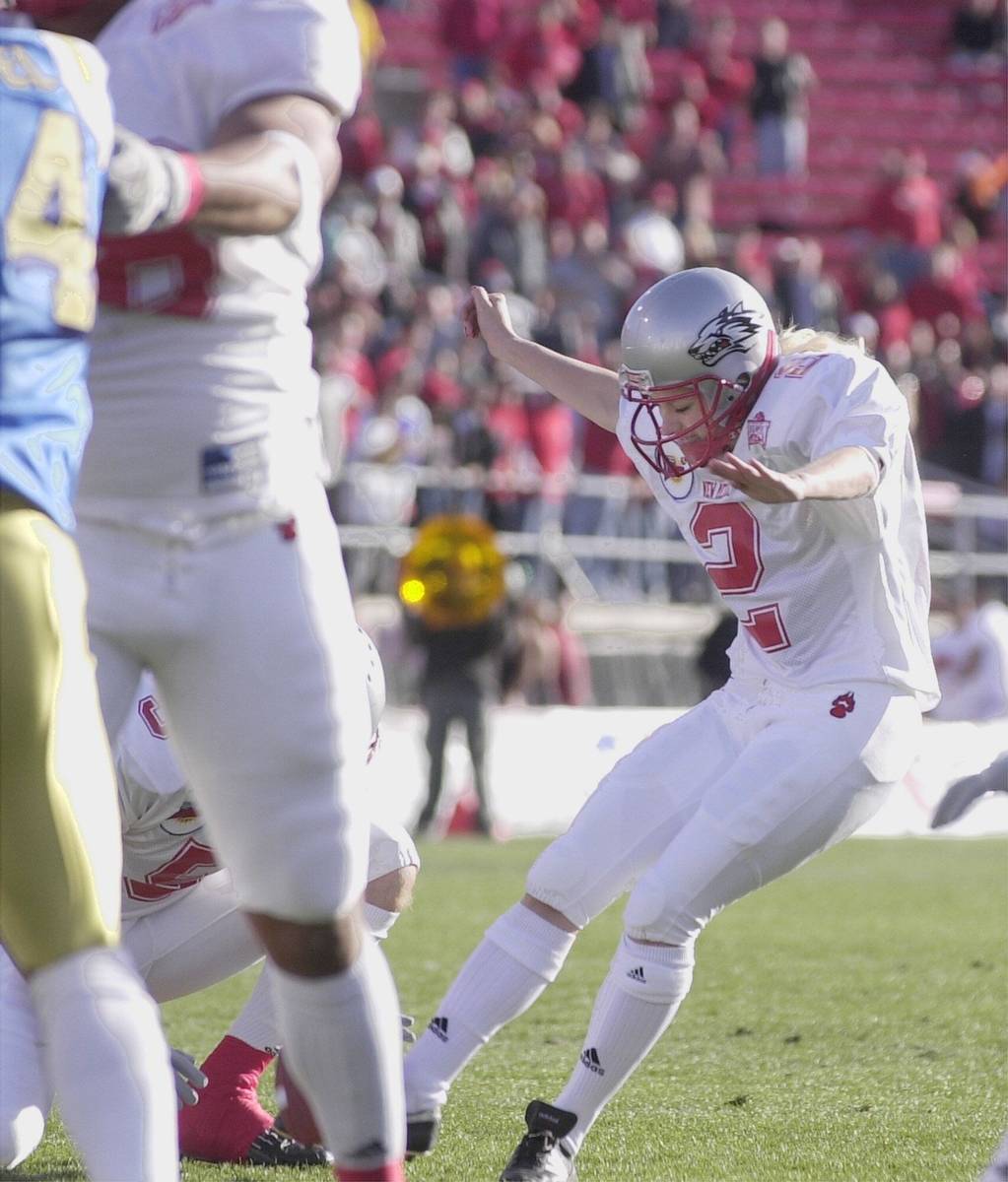 Katie Hnida, a place-kicker for New Mexico, attempts an extra point during the first quarter Wednesday, Dec. 25, 2002, against UCLA in the Las Vegas Bowl at Sam Boyd Stadium in Las Vegas. The kick was blocked. (AP Photo/Joe Cavaretta) JOE CAVARETTA

With darkness quickly settling it on the fourth hole of a three-way sudden death playoff, Jonathan Byrd pulled a 6-iron from his bag and knocked what would be the last shot of the 2010 Shriners Open at TPC Summerlin stiff to the pin on the 204-yard 17th hole.

It pierced the gloom 10 feet from the cup and rolled in like a putt.

It was the only tournament in PGA Tour history to decided by an ace in sudden death. There’s a bronze plaque embedded at the site, commemorating it.

There can be no more dramatic way to end a golf tournament than a walk-off ace. But Byrd’s historic shot wasn’t good enough to make the top 10 on a list of individual sports milestone events that have occurred in Las Vegas, according to a panel of longtime observers of the Southern Nevada sports scene.

Team accomplishments such as the Golden Knights’ incredible trip to the Stanley Cup Final in their first season and the memorable runs of Jerry Tarkanian’s UNLV Rebels in the NCAA Tournament were not considered.

See if you can remember these individual moments:

It was a sky hook like all the others. And none other. With 8:53 to play in the fourth quarter, Kareem Abdul-Jabbar unfurled his trademark shot that swished through the basket at the Thomas &Mack Center — the Utah Jazz’s home away from home during the 1983-84 NBA season — as the Los Angeles Lakers’ legendary big man surpassed Wilt Chamberlain’s 31,419 points to become the league’s all-time leading scorer.

Only 20 years old and making his fifth PGA Tour start, Tiger Woods defeated Davis Love III on the first hole of a sudden-death playoff to notch the first pro victory of his spectacular career in the Las Vegas Invitational at TPC Summerlin. The winner’s paycheck was $297,000, but as Love said after losing to golf’s budding superstar and becoming a footnote in golf history: “He’s not playing for the money. He thinks about winning and nothing else.”

On Christmas Day in the Las Vegas Bowl, New Mexico’s Katie Hnida trotted onto the field at Sam Boyd Stadium hoping to become the first woman to score in a major college football game. She settled for becoming the first woman to play in one after UCLA’s Brandon Chillar blocked her extra point kick. “I still remember that damn hand,” she told the Review-Journal in a 2020 interview, 18 years after breaking the barrier and 17 after booting a PAT in a regular-season game.

The NASL season opener on an artificial pitch on the edge of the Las Vegas desert pitting Brazil’s Pele of the New York Cosmos and Portugal’s Eusebio of the short-lived Las Vegas Quicksilvers was billed as a showdown of the game’s two most prolific goal scorers (1,366 combined), although both were beyond their prime. The Quicksilvers won 1-0 on a goal by Victor Arbelaez, who would become soccer coach at Bishop Gorman High School.

Trailing on the judges’ scorecards, George Foreman was told before the start of the 10th round at the MGM Grand that he would need a knockout to defeat youthful champion Michael Moorer. That’s exactly what happened. The boxing big man landed a right hand flush on Moorer’s chin that was so devastating it broke his mouthpiece. At 45, Foreman became boxing’s oldest heavyweight champion in a fight aptly billed “One for the Ages.”

Anytime you surpass Gordie Howe in anything it’s news. When you eclipse his NHL record for consecutive games played in a loss to the Golden Knights at T-Mobile Arena, it’s history. After 41-year-old Patrick Marleau of the rival San Jose Sharks skated in his 1,768th consecutive game, he was applauded by a normally hostile crowd and fierce opponent. “Everybody in our locker room respects the hell out of what he’s doing,” Knights captain Mark Stone said.

It what was called the biggest fight in the history of combat sports, Floyd Mayweather defeated mixed martial artist and boxing novice Conor McGregor via 10th-round TKO in a fight at T-Mobile Arena that proved more compelling than most skeptics anticipated. Mayweather extended his undefeated streak to 50 fights without a blemish, surpassing Rocky Marciano’s 49-0 record. Probably more important to him, he pocketed $280 million to McGregor’s $130 million.

Becky Hammon made headlines when she became the first female coach in NBA Summer League history — and then led the San Antonio Spurs to the title at Cox Pavilion and the Thomas &Mack Center on the UNLV campus. “We want to make sure that when your wife or daughter goes in for a job interview that she gets the same opportunity a guy gets,” the former Colorado State star said about the significance of her accomplishment.

On the last pitch of the last professional baseball game played at Cashman Field, 51s slugger Pete Alonso hit a mammoth game-winning home run. As the future New York Mets’ first baseman rounded the bases and a crowd of 5,353 shrieked in disbelief, a tile fell from the press box ceiling. After 36 years, it was time to build a new ballpark.

When Danica Patrick parlayed a fuel-strategy run into a fourth-place finish in the Sam’s Town 300 Xfinity Series race at Las Vegas Motor Speedway, her NASCAR career was just getting started. It was the highest finish by a woman in a NASCAR touring series event and gave credence to a notion she was on the fast track to stardom. Alas, it would be the best NASCAR finish by Patrick, who struggled after moving up to the top echelon Cup Series. 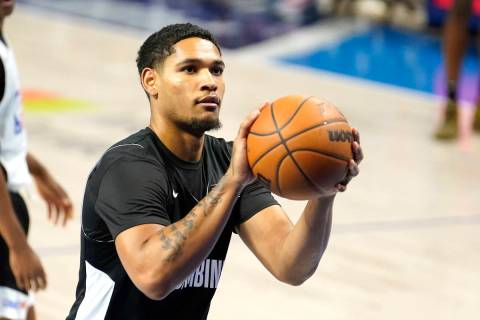 From Alaska to Las Vegas to the G-League, NBA’s next for Nix
By Sam Gordon / RJ

Daishen Nix came to Las Vegas to develop as a basketball player at Trinity International School. His unusual journey should land him in the NBA on Thursday.

Las Vegas Events and the Professional Rodeo Cowboys Association has decided to start the 10 rodeo performances at 5:45 p.m. in a bid to expand the East Coast audience.