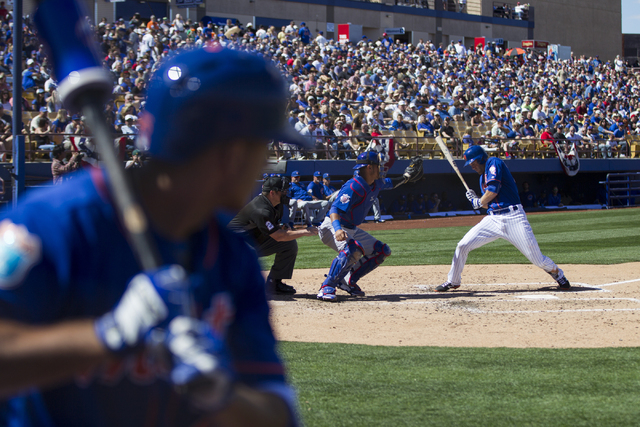 The 51s hit the road for an eight-game road trip starting Friday in Salt Lake against the Bees. Here are a few players to keep an eye on throughout the four-game series.

The PCL is a merciless league for pitchers, so what Nate Jones has done this year shouldn’t be overlooked. He has been Salt Lake’s most consistent pitcher this year, going five innings or more in all but two starts this year.

His ERA is a respectable 4.35, but inflated due to two outings this season in which he allowed at least eight runs. In his last start, Wednesday against Tacoma, he went six innings and allowed one run. He is scheduled to pitch Monday against Las Vegas.

How will he follow his best start of the season? He came one out short of a complete game Tuesday night against Reno, settling for the longest outing by a Las Vegas pitcher this season, allowing only one run.

He is scheduled to pitch Sunday against Salt Lake. It will be his first time pitching against the Bees this season. In six road starts he is 4-2 with a 5.65 ERA.

He has played all over the diamond, but may be settling into the hot corner. Since T.J. Rivera was placed on the disabled list Wednesday, Campbell has started both games at third base and may be there for the foreseeable future.

If the 51s are going to take the lead against the Bees, they better do it before Guerra comes into the game. He was recently designated for assignment by the Angels and outrighted to Triple-A, but has been lights-out for Salt Lake.

In 17 appearances for the Bees has pitched 18 2/3 innings with 23 strikeouts and an ERA of 1.45. He has pitched in one game since returning to the minors from the Angels, throwing 1 1/3 innings on Tuesday, getting the save and striking out a pair.

While making a rehab assignment for the Angels, he picked apart Tacoma pitching in his first three games in the PCL. He has a .348 average (8-23) with a double and three walks.