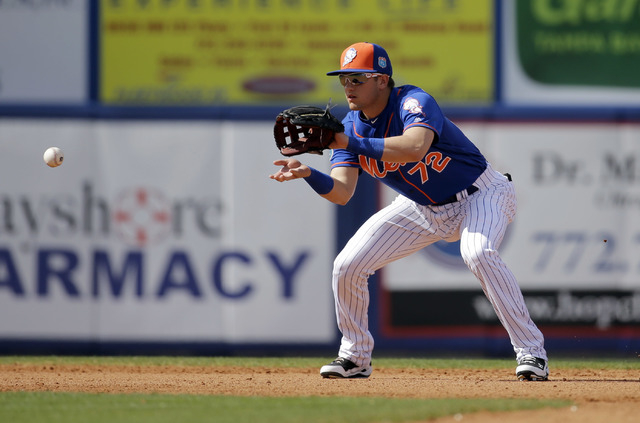 In a matter of minutes, what looked like a sure victory quickly started to unravel for the 51s on Saturday night in Fresno, California.

An error by shortstop Gavin Cecchini led to a four-run ninth inning for Fresno that sent the Pacific Coast League game into extra innings.

Las Vegas eventually beat the Grizzlies 7-5 in 11 innings, but not before seeing a 5-1 lead evaporate.

“I know we should have won the game in nine innings,” 51s manager Wally Backman said, “but you find out, I think for me as a manager, yeah, we gave up four runs that we shouldn’t have given up in the ninth to tie the game, but I think you see the character of your player. They didn’t want to lose that game.”

After a walk and a strikeout to begin the ninth, Cecchini made a throwing error on a routine play, setting up a situation with two runners in scoring position for the Grizzlies (4-4).

Backman said he could sense the game speeding up late on some of the younger guys on the team, and that was something the coaching staff needed to work on with them.

“You’ve got to be able to play the first and second innings just like you play the ninth inning. And tonight it really showed with the youth that the game got really fast,” Backman said. “With that being said, it’s something they need to learn from because the game’s like that all the time in the big leagues. Every inning.”

After closer Paul Sewald froze power-hitting prospect A.J. Reed with the bases loaded for the second out of the inning with a 5-3 lead, it looked as if they might escape.

Sewald was one strike from closing out the game against the next batter, but a single from Matt Duffy, last year’s PCL Most Valuable Player, forced extra innings.

But the 51s came back in the 11th inning to score two runs. Walks to Roger Bernadina, Marc Krauss, Cecchini and Rene Rivera produced one run, and Ty Kelly singled home the second.

The blown lead wasted a quality start from Las Vegas right-hander Gabriel Ynoa, who allowed one run and three hits in 6 1/3 innings.

“He kept us in the game and did everything he had to do. He should have gotten the win,” Backman said. “It’s a shame that he didn’t get the win. We should’ve been better in the end, and we weren’t.”

Ynoa’s start was the longest by a 51s starter this season and his second solid performance.

Backman said a scout told him during the first series that Ynoa was going to be the team’s best starter.

“I was, like, ‘Wow, that’s making a statement,’ (but) so far he’s been very consistent,” Backman said. “He’s (gotten) ahead of hitters. And when (he gets) ahead of hitters, he’s able to expand the zone and get the outs. There (were) not very many balls hit very hard off him.”

Ynoa pitched with a lead for most of the game, as the 51s scored in the first, third, fourth and seventh innings with help from Fresno catcher Roberto Pena.

Pena made four errors last season in 619 innings behind the plate. But Saturday, he made three throwing errors and the 51s scored a run off each.

And while the 51s capitalized on errors earlier in the game, it ultimately came down to their response in extra innings, fending off what would have been a bad loss.

“After having a lead, a four-run lead basically the whole game and blowing it in the ninth, a lot of guys can get down and not so much quit, but our guys, they don’t do that,” Backman said. “They fought back.”