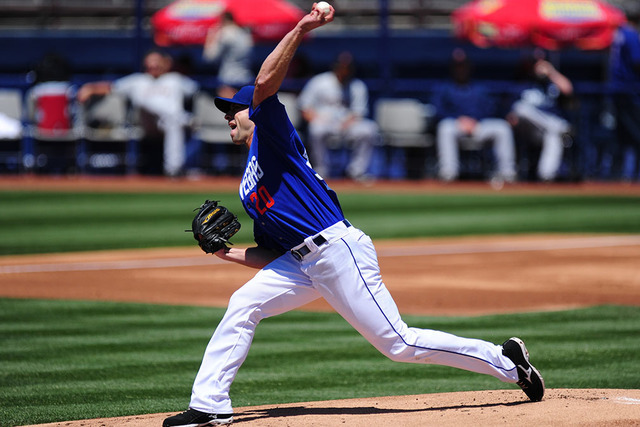 The first two games of the series saw the 51s make dramatic comebacks to win the game. Monday night had about as little drama as possible as the Tacoma Rainiers scored early and often en route to a 9-1 victory at Cashman Field.

“It was kind of one of those nights,” 51s manager Wally Backman said.

The second inning was tough to stomach for Backman, who watched his starter Duane Below retire the first two batters of the inning before a single fell in front of center fielder Brandon Nimmo on a ball that Backman said he thought could have been caught. The next batter grounded out to shortstop Gavin Cecchini, who airmailed the throw, allowing two unearned runs to score later in the inning.

“If we make those two plays, it holds (Below’s) pitch count down,” Backman said. “He didn’t pitch as bad as it might seem. He probably would have been in the game longer if either one of those plays were made.

“I think he still pitched good enough to keep us in the game.”

Below went 5 2/3 innings, allowing 11 hits and five runs, three earned. The 11 hits were tied for the most allowed by a 51s pitcher this season.

Tacoma added a run each in the third and fourth innings then hung four on Las Vegas in the eighth to put the game out of reach.

Cecchini said the day game Tuesday following a loss makes it easier to put the game out of mind quickly.

“Whenever you can get back out there as soon as you can after a loss like that, that’s what it’s all about,” he said. “That’s the beauty of baseball. Yeah, it’s a long season but you have to turn the page quickly.”

The 51s lone run came courtesy of a Nevin Ashley solo home run in the fifth inning, his second of the season.

The 18 hits surrendered by the 51s fell short of the season high. They gave up 21 April 19 at Sacramento. The nine runs allowed was not close to the season high, which was 17 to El Paso on May 4.