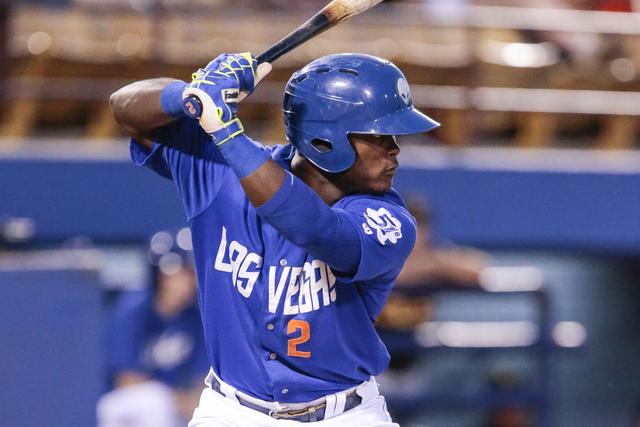 T.J. Rivera’s numbers on the 51s’ road trip more closely resemble something found in a video game than real life. Saturday marked his sixth straight multi-hit game, and he’s hitting .545 in his past seven games while leading the Pacific Coast League in RBIs.

So, unsurprisingly, after the 51s squandered opportunities early, Rivera made the most of his in the seventh, breaking through with a two-out single, driving in a run and getting the 51s on the board en route to a three-run rally.

Las Vegas used that rally to come back from a three-run deficit. The 51s added another run in the ninth on a Niuman Romero single to take a 4-3 victory over host Colorado Springs at Security Service Field.

With the win and Salt Lake and El Paso losses, the 51s moved into sole possession of first place in the Pacific Coast League Pacific South Division.

“We had quite a few opportunities to score runs,” Las Vegas manager Wally Backman said. “The guys fought back hard in the seventh to tie the game up.”

After Rivera’s single — his third hit — the 51s got some help from the lights, as a high Travis Taijeron popup was lost and fell between three Sky Sox players.

“It was still kind of twilight. It wasn’t all the way dark yet, and he just hit it so high that it went out of sight,” Backman said. “I didn’t see it, either.”

Backman said the ball went above the lights, and Colorado Springs second baseman Yadiel Rivera saw it too late. As a result, Rivera scored, Taijeron reached second and the 51s extended the inning long enough for a Marc Krauss single to tie the game.

They had an opportunity to take the lead in the eighth, stranding two runners, a common theme throughout the game. They finished 3-for-15 with runners in scoring position and left 13 runners on base.

But after Romero came through with a clutch hit in the ninth to give them the lead, none of that mattered.

Starter Seth Lugo took a no decision, giving up three runs in 5 2/3 innings.

He gave up a two-run homer in the first inning to Shane Peterson, but then retired 16 of 18 before allowing another run in the sixth.

“I thought Lugo pitched really well,” Backman said.”He made a bad pitch in that first inning, gave up a two-run homer. He settled down pretty well.”

Lugo has been inconsistent this season, often alternating good starts with bad ones, and Backman said it starts and ends with first-pitch strikes.

“When they do that, they can expand the zone and they’re better. I think he’s been one or the other,” Backman said. “There’s not really been any in between. When a guy struggles a little bit and (he) can still get a win — he hasn’t been able to do that yet.”

Saturday saw the better version Lugo, and though he didn’t get the win, he pitched well enough to keep the team in the game before turning it over to the bullpen. Four relievers — Josh Edgin, Chasen Bradford, Josh Smoker and Paul Sewald — blanked the Sky Sox for the team’s second win in three days over Colorado Springs.

“The bullpen really did everything they had to do,” Backman said. “Our bullpen is a big asset. I think they got the win, and that makes them only .500, but I’ve always thought that our bullpen is going to be a big asset to our success.”