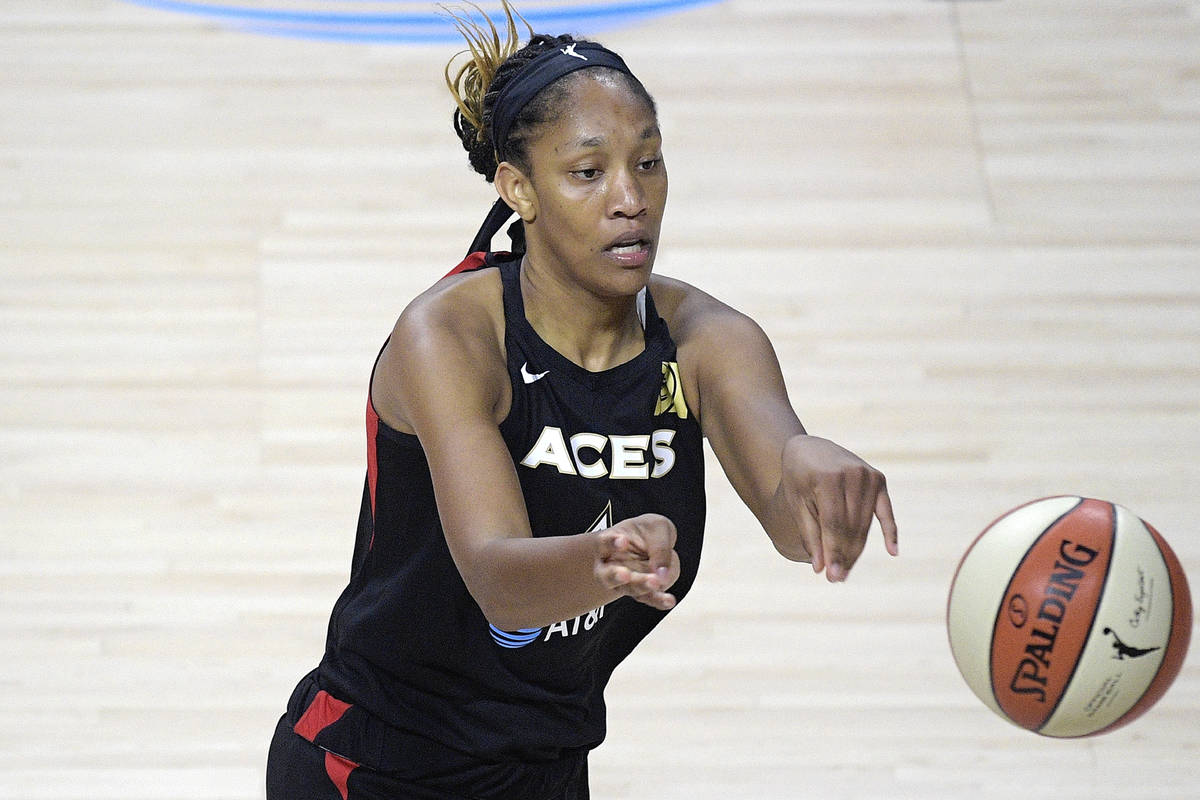 Being the top overall pick in any draft comes with a tremendous amount of responsibility, especially when the player is going to a team in a new city.

That’s the situation A’ja Wilson, a 6-foot-4-inch forward who was fresh off helping South Carolina win its first national championship, walked into when she was picked No. 1 in 2018 by the Aces, which had recently moved from San Antonio.

While Wilson’s play made her an immediate star, it wasn’t always an easy transition going from college and being expected to be a leader right away.

“She went through two years that were kind of brutal, forcing the leadership mantle on her,” Aces coach Bill Laimbeer said. “She was unprepared for it, and it was hard for her. Now, she’s come to peace with that.”

Laimbeer said Wilson told him in the offseason, “I’ve got this one, Bill,” and has embraced the leadership responsibility.

Through seven games in the bubble in the Bradenton, Florida, it’d be hard to argue she hasn’t. She’ll try to help the Aces to their sixth straight win when they meet the Minnesota Lynx at 6 p.m. Thursday.

Wilson leads the league in scoring, averaging with 21 points, and her 9.1 rebounds are fourth. Those numbers alone are no surprise, as they closely mirror her Rookie of the Year campaign when she led the Aces, averaging 20.7 points and eight rebounds.

But it’s how — and when — she’s putting up those numbers. The Aces struggled throughout Sunday’s game against one-win New York, but Wilson wouldn’t let her team lose. She scored 12 of her 31 points in the fourth quarter, including a short jump shot with 6.9 seconds left that proved to be the difference in a 78-76 win.

Afterward, Laimbeer said the win was a simple case of Wilson putting the team on her back. In a private moment, he told her she was learning to become a leader.

“It honestly means a lot because he’s been harping on it for a long time now,” Wilson said. “So for me to come around, it means a lot. I was a leader at South Carolina, so I knew I had it in me. But it’s different when you get to the professional leagues.”

After that game, Aces guard Danielle Robinson wrote on Twitter that Wilson is “my MVP.” Teammate Dearica Hamby corrected her: “THE” MVP.

The New York game was a highlight that helped Wilson earn the Associated Press Player of the Week honor. In three games, she averaged 25.7 points, eight rebounds and 1.7 blocks while shooting 60 percent and making 82.1 percent of her free throws.

“You’d never think it was just her third year,” Robinson said. “She’s playing at an MVP level and putting us on her back. … A’ja is going to be A’ja, and I think that’s the best thing about her. People gravitate toward her because of her personality, because of her energy. That’s the kind of leader we need on this team.”

Wilson is also finding her voice as a leader off the court.

She has constantly spoken about how she and all the players in the WNBA are playing for something bigger than basketball this season. She’s the Aces’ representative on the Social Justice Council, and she penned an article in The Players’ Tribune days before the season began detailing her experiences as a Black girl growing up in South Carolina.

Wilson has also teamed with the Minnesota Lynx’s Napheesa Collier, last year’s Rookie of the Year, for a podcast called Tea with A & Phee that has displayed both sides of Wilson’s personality — serious and silly — and has already had basketball luminaries Kevin Durant and Elena Della Donne in the first three episodes.

And she’s proud of steps the WNBA has taken in allowing players to use their platforms to speak out.

“I think a lot of people see sports as a distraction, but once they see how we’re using our voice and our platform and how we’re using basketball as a tool, that’s when people start to listen,” Wilson said. “Yes, we’re wearing shirts. Yes, we’re always talking about it, but we have to hit it where it hurts. Change is not going to happen overnight, but we’ll start to see it. It’s not a trend. It’s not a hashtag. It’s not a T-shirt. It’s our life. It’s my life. I take it very personally, and that really matters to me.”