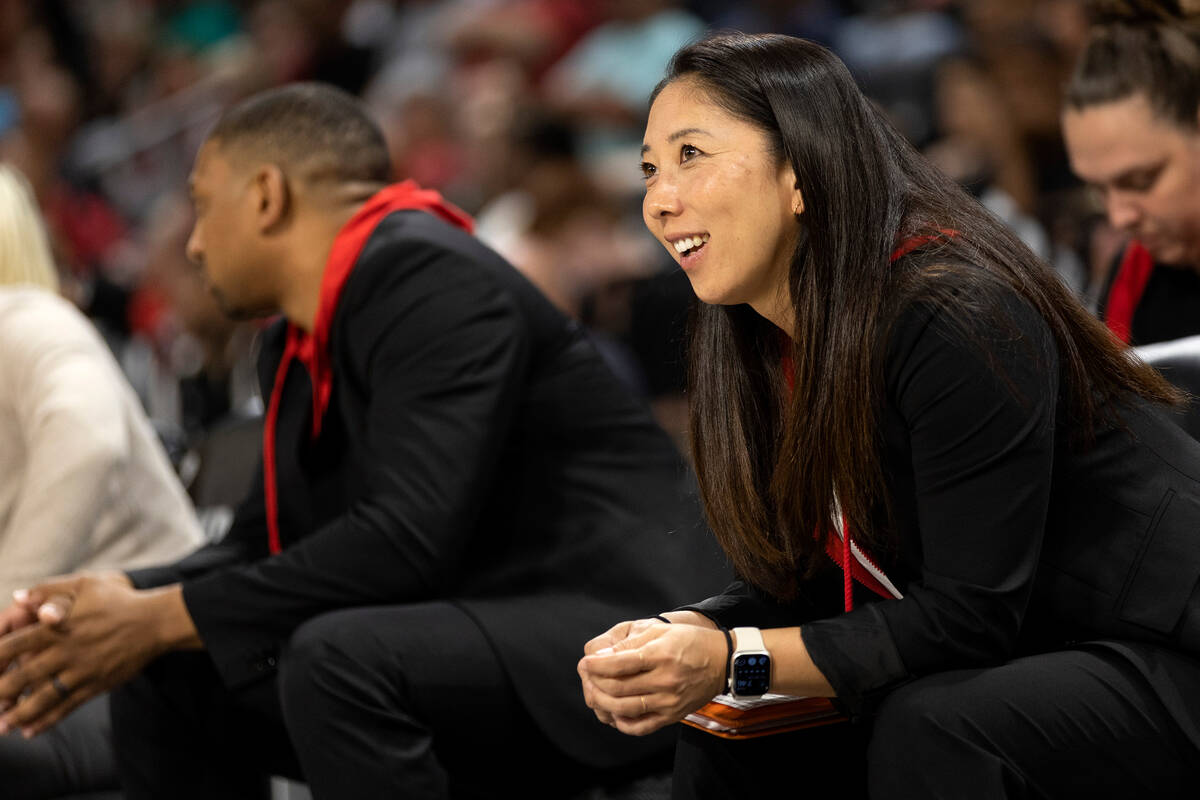 Las Vegas Aces assistant head coach Natalie Nakase reacts to a referee’s call from the sidelines during the first half of a WNBA basketball game against the Atlanta Dream at Michelob ULTRA Arena on Tuesday, Aug. 9, 2022, in Las Vegas. (Ellen Schmidt/Las Vegas Review Journal) @ellenschmidttt 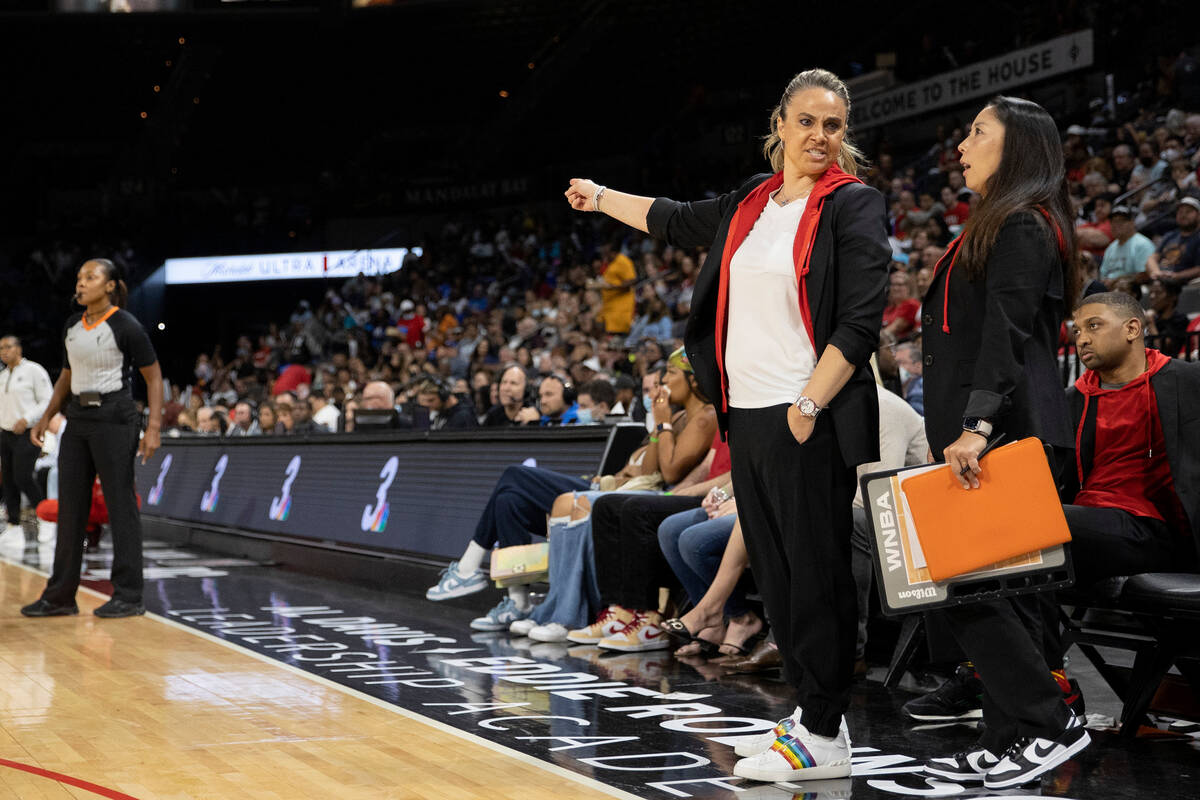 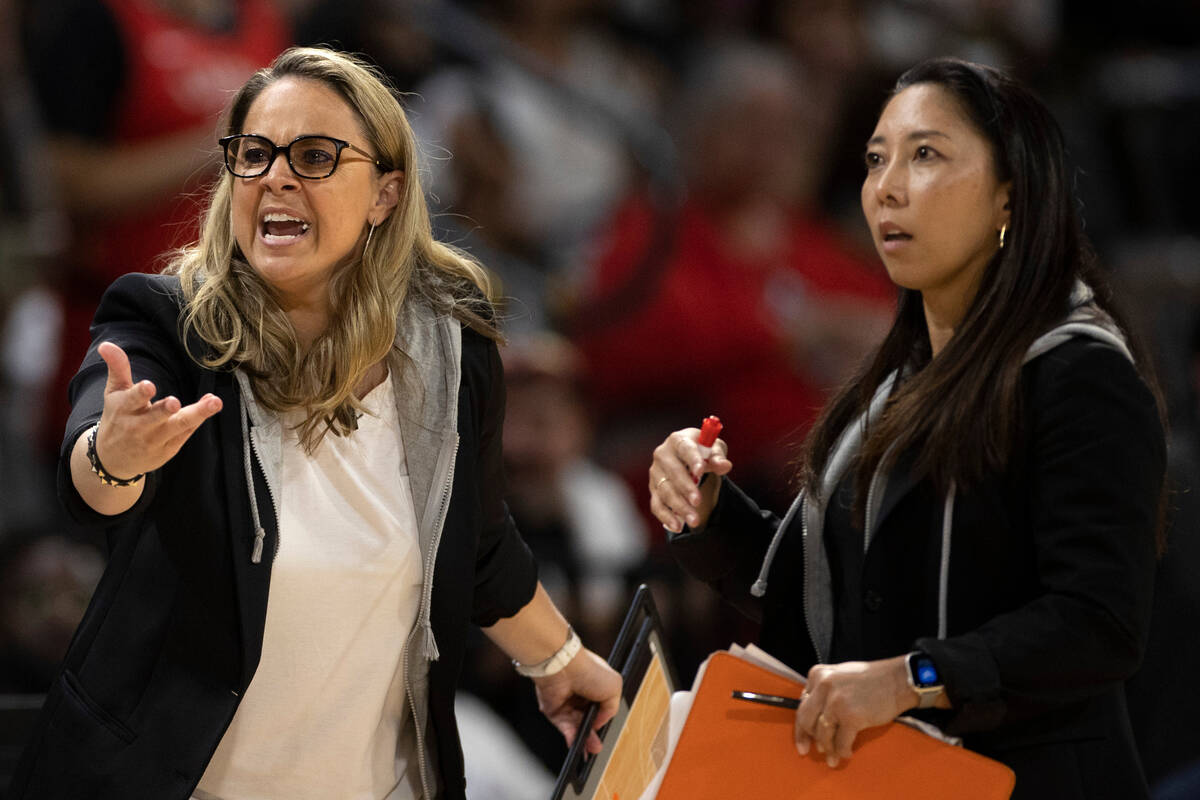 Now, as her coaching career continues to ascend with the Aces, Nakase has become a symbol for an entire, basketball-obsessed community.

She is the Aces video coordinator, guard skills coach and helps develop the team’s defensive schemes, a role similar to the one she served for the Los Angeles Clippers of the NBA and their G-League affiliate.

“She is a role model, especially to young Japanese American girls,” Jerry Nakafuji, the president of the Nikkei Basketball Heritage Association, said. “She’s committed. She has that sense of loyalty to the community.”

The youngest of three daughters, Nakase grew up in gyms as her father, Gary, coached her older sisters, Nicola and Norie. Since he was already taking her to her sisters’ practices, her father convinced the South East Youth Organization to let Nakase play, even though she was technically too young.

Nakase’s love of basketball continued to grow, but really took off when she was 10 years old. That year, she was sent to a Japanese language school by her parents and absolutely loathed it.

The teachers were strict, the language was hard and she was frustrated. After complaining to her father, he offered her a choice: keep going to Japanese school or spend that time doing extra basketball training. It wasn’t a difficult decision.

In hindsight, Nakase, one of the first female coaches to sit on an NBA team’s bench while serving as an assistant for the Clippers during the 2014 Las Vegas Summer League, admitted knowing some Japanese would have been useful, especially when she coached in Japan for a short stint. However, at the time, she wanted nothing more than to spend her Sunday mornings in a gym shooting hoops.

In those leagues, Nakase found a sense of community, an environment which fueled her competitive spirit while also providing a sense of kinship. She still considers many of her former teammates close friends.

James can rattle off names for several minutes of Japanese American players before Nakase who played at a college level. However, one thing separated her from everyone else.

“Her dreams were bigger than anyone else I knew in the sport,” James said.

At its core, Nakase’s dream has always been the same. Her father always emphasized testing oneself at the highest possible level, and it’s been a guiding principle in Nakase’s basketball and coaching careers. The pursuit of high level challenges led her to a walk-on spot at UCLA, which she eventually converted into a scholarship.

Nakase’s games with the Bruins became gathering events for the entire Japanese American community. Jaime Hagiya, a former USC women’s basketball player who also came through the Japanese American leagues, remembers going to Pauley Pavilion to watch Nakase. Hagiya was in high school at the time. She said watching Nakase play for the Bruins was an inspirational moment for her.

“She looked like me,” Hagiya said. “Representation matters, because that’s literally the moment I was like, ‘I believe I can be out there playing. I can make it one day.’”

Hagiya wasn’t the only Japanese American player encouraged by Nakase’s UCLA career. Allison Taka played for the Bruins from 2007-2010. She also went to several of Nakase’s games as a teenager.

After Nakase completed her UCLA career in 2004 and began to move into training and coaching, Taka was one of her earliest disciples.

Nakase reached out to her former Bruins coach Kathy Olivier to recommend they take a look at Taka, who said she likely wouldn’t have been considered by UCLA without Nakase’s help.

“She genuinely wants to see the next generation of JA kids and Asian kids be able to experience what she experienced, and maybe have an easier time doing it than she did,” Taka said.

Nakase’s dreams carried her beyond UCLA, too. After injuries ended her professional basketball career, she pivoted to coaching, with goals of becoming a head coach in the WNBA or NBA someday. Once again, the desire to succeed at the highest levels has made her one of the most visible Japanese Americans in the basketball world.

With that ambition came the burden of being a trailblazer.

Hagiya, for example, never felt pressure to succeed at basketball until arriving at USC. She got a similar treatment to Nakase while playing for the Trojans. Community members regularly filled the Galen Center to support Hagiya, but the desire to play well in front of them — along with all the other stresses of high-level collegiate athletics — impacted her game all the way until her senior season.

While Nakase didn’t feel that much pressure in college, she’s still surprised when people call her a role model or an inspiration. Being a very visible representation of Japanese Americans in basketball was never the dream, it was simply a byproduct.

The Aces assistant has been able to come to terms with her status as a role model in the Japanese American community because she sees herself as part of an evolution. Nakase looked up to former UCLA star Teiko Nishi, who played for the Bruins from 1985-88.

“If you know someone has done it ahead of you, then you’re just like, ‘I can do that, too,’” Nakase said.

If Nishi helped empower Nakase to believe she could play at UCLA, the Aces assistant hopes she can inspire young Japanese American players to take it a step further.

Nakase points out that while she played professionally, she never made the WNBA. She praised Japanese guard Rui Machida of the Washington Mystics for making her debut this season.

The former Clippers coach also knows she has intrinsic knowledge about how to succeed and find opportunities at some of the highest levels of basketball. Nakase wants to pass that information along, which is part of why she’s always made herself available to people who ask for her help.

Hagiya and Nakase have held camps together. Even as the Aces assistant’s basketball stature has grown, she tries to be available to do panels and speak at events in the Japanese American community.

Nakase now sees it as a responsibility — passed down from her father to herself — to help guide the next generation of Japanese American basketball players.

“If I can help in any way,” said Nakase, “I definitely want to give my time.”